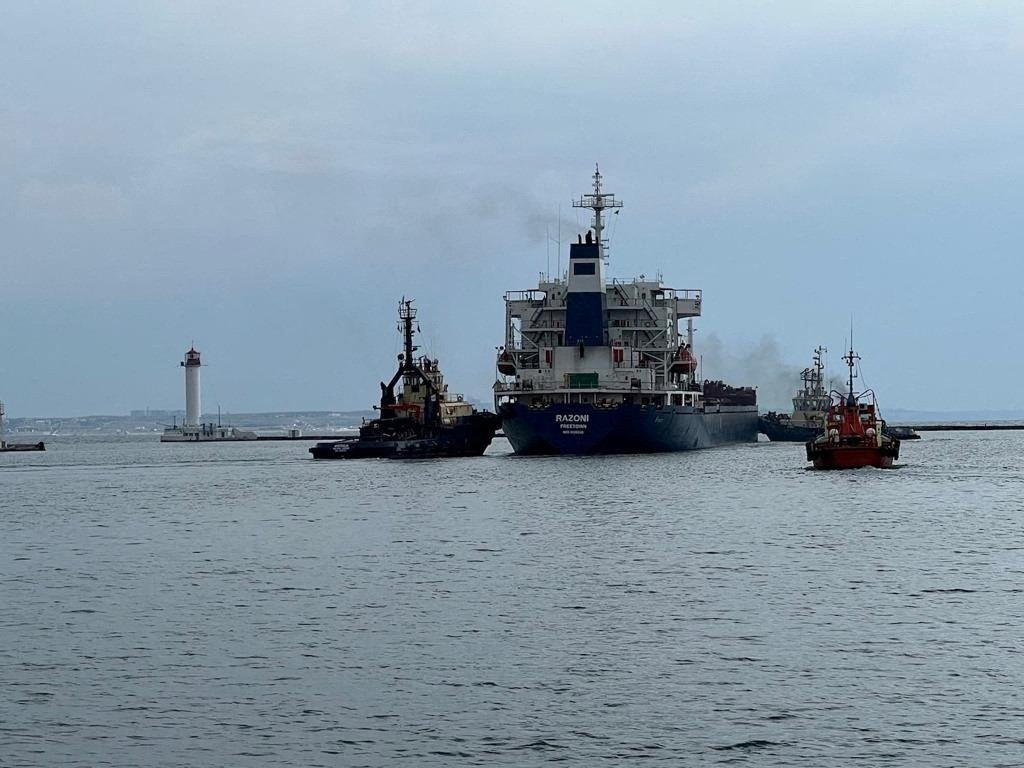 The first ship carrying grain out of Ukraine under a safe passage agreement will anchor off the coast of Istanbul at around 12 p.m. GMT on Tuesday for a joint inspection, Defense Minister Hulusi Akar said on Monday, according to Azerbaijan in Focus, reporting Daily Sabah.

Akar shared the update in an interview with Anadolu Agency (AA) after the Sierra Leone-flagged ship Razoni left the Ukrainian port of Odessa loaded with corn bound for Lebanon. As part of the agreement, a joint coordination center was set up in Istanbul with personnel from the United Nations, Russia, Ukraine, and Turkey.

Akar said that the efforts on grain shipments from Ukraine will continue, adding that the matter is a “humanitarian issue.”

“The next ships will continue likewise without any disruptions,” he underlined.

Akar said the global food crisis had to be addressed, adding that it was “at a point where it could trigger migration. It may bring along a serious wave of migration from Africa to Europe and Turkey.”

On grains and chemicals awaiting shipment out of Russian ports, Akar said Turkey would “be glad” to contribute in that respect as well.

Turkey, the U.N., Russia, and Ukraine signed a deal on July 22 to reopen three Ukrainian ports – Odessa, Chernomorsk, and Yuzhny – to export grain that has been stuck for months because of the ongoing Russia-Ukraine war, which is now in its sixth month.

To oversee Ukrainian grain exports, the joint coordination center in Istanbul was officially opened Wednesday and comprised of representatives of Turkey, the U.N., Russia and Ukraine to enable the safe transportation by merchant ships of commercial foodstuffs and fertilizers from the three key Ukrainian ports in the Black Sea.

Ukrainian Foreign Minister Dmytro Kuleba on Monday hailed the departure from the port of Odessa of the first shipment of grain since the start of Russia’s invasion, describing the development as a “relief for the world.”

“The day of relief for the world, especially for our friends in the Middle East, Asia, and Africa, as the first Ukrainian grain leaves Odesa after months of Russian blockade. Ukraine has always been a reliable partner and will remain one should Russia respect its part of the deal,” Kuleba tweeted.

“The first grain ship since #RussianAggression has left port. Thanks to the support of all our partner countries & @UN we were able to fully implement the agreement signed in Istanbul,” he wrote on Twitter.

“Unlocking the ports will provide at least $1 billion in foreign exchange revenue for the economy and an opportunity for the agricultural sector to plan next year’s sowing season,” Kubrakov said in a separate ministry statement.

“In the ports of Greater Odessa another 16 vessels are already waiting their turn. These are the vessels that have been blocked since the beginning of Russia’s full-scale invasion,” he said.

“Today Ukraine, together with its partners, makes another step to prevent world hunger.”

“The ship is bound for the port of Tripoli, Lebanon, carrying a cargo of 26,527 tons of corn, and is the first vessel to depart under the Black Sea Grain Initiative signed in Istanbul, on 22 July. Ensuring that existing grain and foodstuffs can move to global markets is a humanitarian imperative,” said a U.N. statement by Guterres’ spokesperson, Stephane Dujarric.

It added that this departure was the collective achievement of the joint coordination center in Istanbul.

According to the statement, Guterres also commended Turkey for its leadership, noting: “The Secretary-General hopes that this will be the first of many commercial ships moving in accordance with the Initiative signed and that this will bring much-needed stability and relief to global food security, especially in the most fragile humanitarian contexts.”

Kremlin spokesperson Dmitry Peskov said he hoped the agreement will be implemented by all sides.

“This is a good opportunity to test the implementation of the agreements that were agreed upon at the Istanbul talks,” Peskov said.