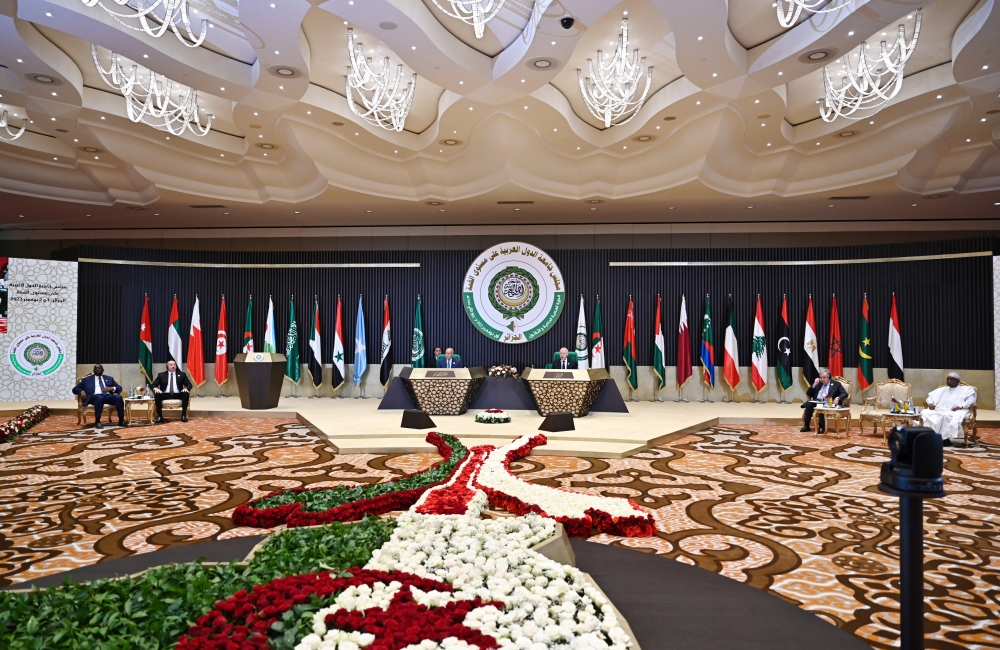 The 31st Arab League Summit has been held in Algiers, the capital city of the People’s Democratic Republic of Algeria, according to Azerbaijan in Focus, reporting AzerTac.

President of Algeria Abdelmadjid Tebboune welcomed President Ilham Aliyev, the heads of state and government, and the heads of the delegation attending the Summit.

The Azerbaijani and Algerian presidents posed for official photographs.

President of Algeria Abdelmadjid Tebboune, and Secretary General of the Arab League Ahmed Aboul Gheit made speeches at the event.

Then the floor was given to the President of Azerbaijan.

President Ilham Aliyev made a speech at the Summit.

Dear heads of state and government,

First of all, I would like to express deep gratitude to the President of Algeria, and Secretary General of Arab League for invitation. I consider it as a sign of friendship, as a sign of brotherhood. It is a big honor for me to be present today at this important Summit and to demonstrate unity between our countries. I am especially very glad to visit Algeria on this special day, the day of national liberation, day of national dignity. I congratulate the President, the government of Algeria, all the people of Algeria on the occasion of this liberation day. Today I paid respect to the memory of the martyrs. I visited the Memorial of Martyrs. I visited the Museum of Moudjahid and was deeply impressed and shocked by what I have seen. The brutality, mass atrocities committed by France against the people of Algeria, something the world should never forget. France conducted a terrible war against the Algerian people for more than 130 years which resulted in the deaths of more than one and a half million Algerians. Today, commemorating this tragedy, we need to do everything in order to avoid these tragedies in the future.

Relationship between the Arab League and Azerbaijan has special dimension. This summer I had an honor to receive Secretary General Mr. Aboul Gheit in Baku. We had broad discussions about our future cooperation. Since 2006 Azerbaijan is an observer to the organization and we want to expand our cooperation. Today I participate at the Summit as the chair of Non-Aligned Movement but, at the same time, we have very profound relationship with the member states of Arab League. And I am sure that in the coming years our cooperation will grow, we will have new dimension and new dynamics. We pay a special importance to bilateral cooperation with the members of Arab League and we highly value the mutual support and solidarity between us. Azerbaijan is a country which also suffered like Algeria from occupation for 30 years. Our lands were occupied by Armenia, and during all these years of occupation we always felt the support of our Arab brothers, we felt the support of member states of the Organization of Islamic States. Azerbaijan, in its turn, always in all international fora supported our Muslim brothers. We contributed largely to Islamic Solidarity. 2017 was declared in Azerbaijan the year of Islamic Solidarity and we hosted the 4th Islamic Solidarity Games which transformed into a sporting event, into a festival of solidarity and friendship.

As a chairman of the Non-Aligned Movement, Azerbaijan plays an important role on the international arena. The Non-Aligned Movement is the second largest international institution after the United Nations, which unites 120 countries. Since 2019, Azerbaijan is a chair of this institution and we have been elected by a unanimous decision of all member states, which demonstrates their high level of support and respect to our position and our policy. Our chairmanship was extended again by a unanimous decision until the end of 2023 and we consider it as another sign of appreciation of our policy. Our chairmanship coincided with the COVID-19 and we took a very proactive stand on that. Azerbaijan provided financial and humanitarian assistance to more than 80 countries with respect to coronavirus. We organized a Summit of the Non-Aligned Movement, we initiated a Special Session of the UN General Assembly devoted to COVID-19, which was held in December 2020. All these initiatives had one objective-the objective to help the countries, which are in need, to help the countries and to mobilize resources, and to help the countries, which cannot afford to acquire vaccines. As you remember, dear colleagues, at the beginning of the pandemic, the access to vaccines was the most critical issue. Some developed countries of the West were acquiring the number of vaccines 5-10 times more than they needed, while countries which did not have resources had to suffer. So, Azerbaijan was very vocal against vaccine nationalism, against unfair distribution of vaccines and that strengthened the support of the Non-Aligned Movement to our position. We are planning to organize a Summit of the Non-Aligned Movement next March, and I, using this opportunity, would like to invite the members of Arab League, the heads of state and government to participate in the Summit. Two years ago, Azerbaijan put an end to almost 30 years of occupation by Armenia of almost 20 percent of our territory. Despite the decisions and resolutions of the leading international institutions, Armenia ignored all these decisions and resolutions and continued to illegally occupy almost 20 percent of our territory.

During the times of occupation, more than one million Azerbaijanis became refugees and IDPs. Our people became the subject of ethnic cleansing. Armenia committed a genocide of Khojaly in 1992 which is now recognized by more than 10 countries. UN Security Council adopted four resolutions demanding immediate and unconditional withdrawal of Armenian troops from our territories but these resolutions were never materialized. And this leads to another important factor which is a mechanism of implementation of resolutions of Security Council. In some cases, resolutions of UN Security Council are being implemented within days, but in our case they remained on paper for almost thirty years. This is double standards, this is unacceptable. This is a selective approach to the norms and principles of international law and to obligations of the countries. Therefore, Azerbaijan as a country, which suffered from injustice and occupation, is actively working in order to contribute to the course of unification of approaches to conflicts. All the conflicts must be treated from the same position. There should not be double standards addressing the conflicts. Occupation must be called an occupation. Two years ago, Azerbaijan, as I said, put an end to the conflict. We did it by force. We used our right for self-defense, which is provided by the Article 51 of the UN Charter, and we liberated our territory by force. We defeated Armenia. Armenia had to capitulate. And now our territories are free and we are back. And what we have seen as we returned. We have seen total devastation and destruction of territory, which is more than 10,000 square kilometers. It is equal to the territory of some countries. Everything is destroyed, cities and villages, buildings, historical monuments, graves of our ancestors. 65 out of 67 mosques have been completely destroyed by Armenia during the times of occupation. This is a reflection of Islamafobic essence of terrorist Armenian state.

Now we are restoring our cities and villages. We started a program, which is called “Great Return”. We do it with our own resources. Unfortunately, international donor organizations don’t help us. We do it on our own. Today, visiting the Museum of Moudjahid, I was informed that during the French occupation, France planted more than 5 million landmines. It just reminded me of the same, the same what we are suffering now. Armenia planted more than 1 million mines during the times of occupation and after the war ended in November 2020, we have more than 260 Azerbaijanis who have been killed or severely injured because of the landmines. We are doing it ourselves. We will restore our lands ourselves and we are already in the process. We see again solidarity from our brothers from member states, from the Arab League. We see support in international institutions and we are very grateful for that. As the President of the brotherly Azerbaijan, brother to members of the Arab League, as a chair of the NAM, I want to assure you that we will do everything in order to strengthen our solidarity, our unity. Once again I’d like to express gratitude to President and Secretary General for this invitation. Once gain I’d like to say that it is a great honor for me be able to address this distinguished audience. I wish you and your people happiness, prosperity and peace. Thank you.

Other heads of state and government, and heads of the delegation then addressed the Summit.

The Arab League was formed on March 22, 1945 by Egypt, Syria, Lebanon, Iraq, Transjordan (now Jordan), Saudi Arabia, and Yemen. Currently, the League has 22 members. The official headquarters of the League is in Cairo.

Turkiye has permanent observer status in the League.