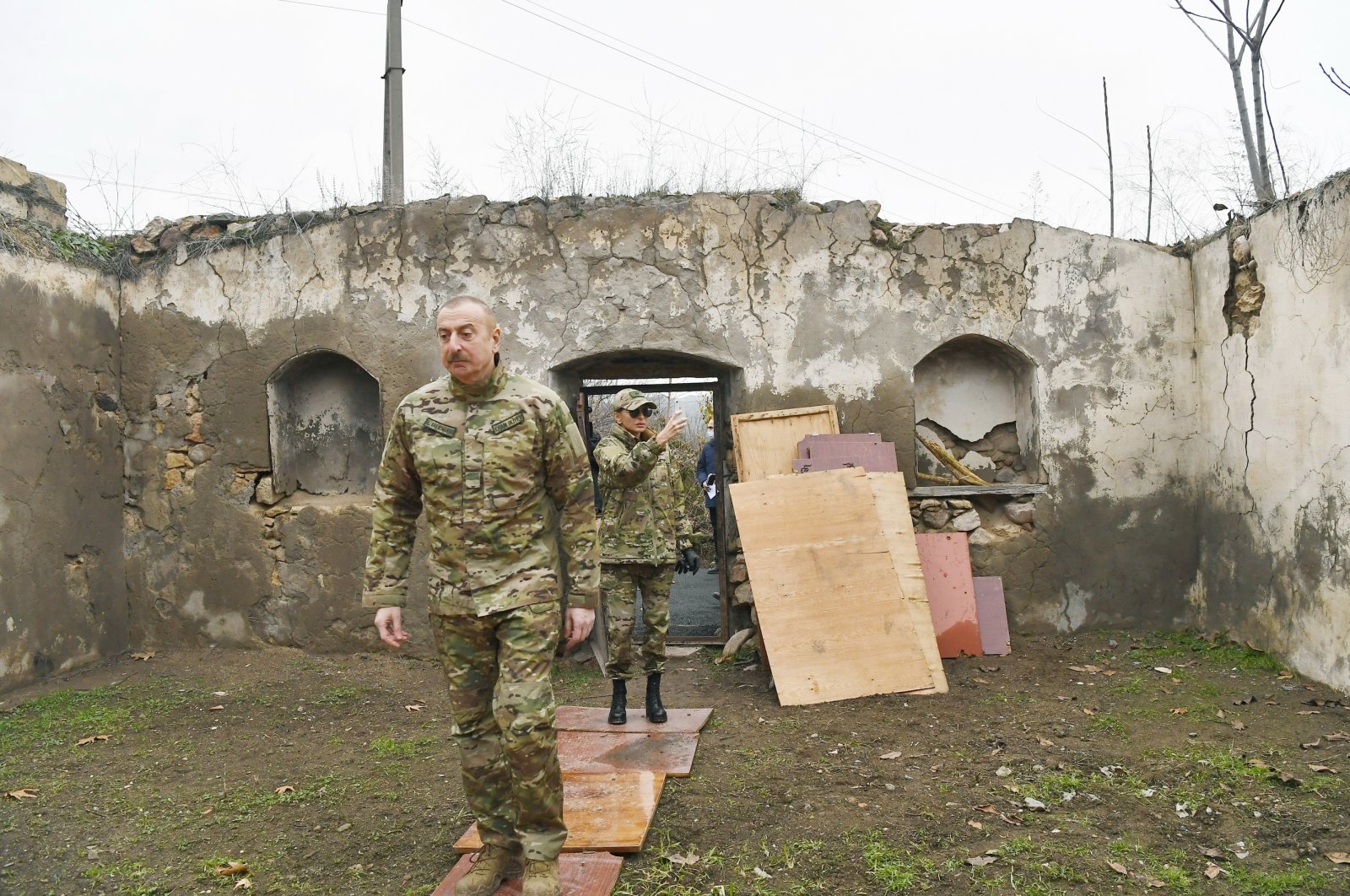 Azerbaijan’s President Ilham Aliyev has criticized UNESCO for turning a blind eye to Armenia’s destruction of religious and historical structures belonging to the Azerbaijani people.

On Wednesday, he and first lady Mehriban Aliyeva visited districts surrounding Nagorno-Karabakh, an area recently liberated by the Azerbaijani army from the nearly three-decade occupation by Armenian forces.

“The enemy has insulted the religion and all Muslims,” he said, referring to the desecration of a mosque in the Zangilan district.

Noting that international circles have lamented the status of Armenian religious structures in the liberated lands, he asked: “But why didn’t anyone raise the issue of our national and religious heritage?”

Aliyev said that as soon as the 44-day war with Armenia ended, UNESCO “started to protect” the sites of the Armenian people.

Aliyev said Armenians also kept pigs, a prohibited animal in the Muslim faith, inside the mosque.

“Unfortunately, we are still hearing that some Muslim states call Armenia a friendly country. The executioners who ruled this ‘friendly country’ for 20 years have done this. They came here and destroyed our mosques and insulted us. The whole world should see this,” he said.

Aliyev said not a single safe building remains in the liberated areas. “All the buildings have been demolished, our villages have been renamed, ugly names have been given to them,” he said, vowing to restore the mosque and open it for prayers.

Relations between the former Soviet republics have been tense since 1991 when the Armenian military took control of Nagorno-Karabakh, a territory recognized as part of Azerbaijan, and seven adjacent regions. Weekslong clashes this fall ended with a cease-fire in November.

While post-conflict diplomacy on the Karabakh region continues, the top Turkish diplomat is set to pay a visit to Sochi next week and meet his Russian counterpart, according to diplomatic sources.

Foreign Minister Mevlüt Çavuşoğlu will meet with Sergey Lavrov on Dec. 29. The two officials are expected to address bilateral relations as well as regional issues.

According to a statement by Russian Foreign Ministry spokesperson Maria Zakharova, Lavrov and Çavuşoğlu will discuss the implementation of the agreement reached between Azerbaijan and Armenia on Nagorno-Karabakh.

The emphasis will be on minimizing the risks of possible clashes and providing humanitarian assistance to the parties, Zakharova said, speaking at a news conference in Moscow.

“On Dec. 29, Turkish Foreign Minister Mevlut Çavuşoğlu, at the invitation of Russian Foreign Minister Sergey Lavrov, will pay a working visit to our country, the city of Sochi, to participate in the eighth meeting of the Joint Strategic Planning Group operating within the framework of the Russian-Turkish High-Level Cooperation Council,” she said. “The focus will be on establishing the joint Russian-Turkish center for monitoring the cease-fire and all military operations in the Nagorno-Karabakh conflict zone.”