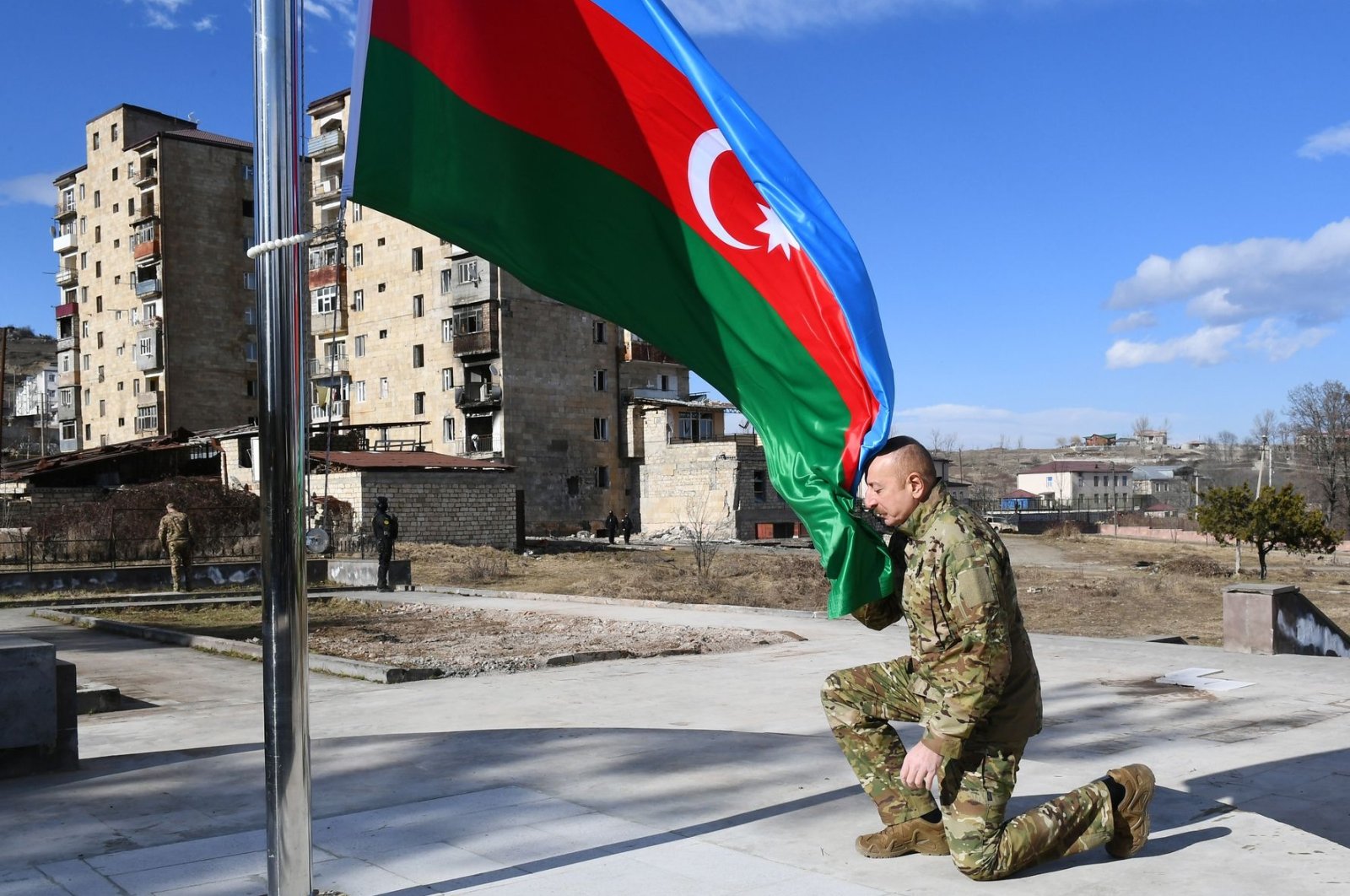 Azerbaijani President Ilham Aliyev kneels in front of the national flag during his visit to the city of Shusha, Azerbaijan, Jan. 15, 2021. (AFP Photo)

Azerbaijan’s President Ilham Aliyev on Tuesday declared that of all international organizations, the Turkic Council has been the biggest advocate and supporter of the Azerbaijani cause.

Aliyev welcomed the delegation and thanked them for their visit to the liberated regions of Aghdam and Fuzuli.

He noted that the delegation saw first hand the destruction caused by the occupying forces in the Azerbaijani cities, underlining that the once flourishing cities of Karabakh that had been home to tens of thousands, had been completely demolished. Aliyev pointed to foreign journalists referring to Aghdam as the “Caucasian Hiroshima”, deeming the description no coincidence.

Aliyev emphasized that the illegal settlement in the occupied territories of Nagorno-Karabakh was in fact a gross violation of the Geneva Conventions and a war crime. He added that the situation was ignored not only by international legal standards but also by moral standards.

He highlighted that the Turkic Council was the international organization that most supported the country’s just cause, thanking the Secretary-General for his ongoing support.

Amreyev’s statements at the start, during and after the war in support of Azerbaijan’s sovereignty and his advocacy on a resolution to the conflict based on the territorial integrity of Azerbaijan will be remembered with great appreciation, Aliyev said.

Aliyev underlined that the country anticipates the active cooperation of Turkic-speaking countries in restoring the liberated territories.

He noted that the country will refer to the Turkic Council and the Turkic Cooperation Organizations during the restoration of the liberated territories’ historical and cultural monuments. Aliyev also noted the plans to restore Shusha’s infrastructure as well as its cultural and historical sights.

Relations between the former Soviet republics of Armenia and Azerbaijan have been tense since 1991 when the Armenian military occupied Nagorno-Karabakh, internationally recognized as Azerbaijani territory, and seven adjacent regions.

During the six-week-long conflict, Azerbaijan liberated several cities and nearly 300 settlements and villages, while at least 2,855 of its soldiers were killed. There are differing claims about the number of casualties on the Armenian side, which, sources and officials say, could be as high as 5,000.

The two countries signed a Russian-brokered agreement on Nov. 10, 2020, to end fighting and work toward a comprehensive resolution.

A joint Turkish-Russian center is being established to monitor the truce. Russian peacekeeping troops have also been deployed in the region.

This article originally appeared in DAILY SABAH on 20 Jan 2021.