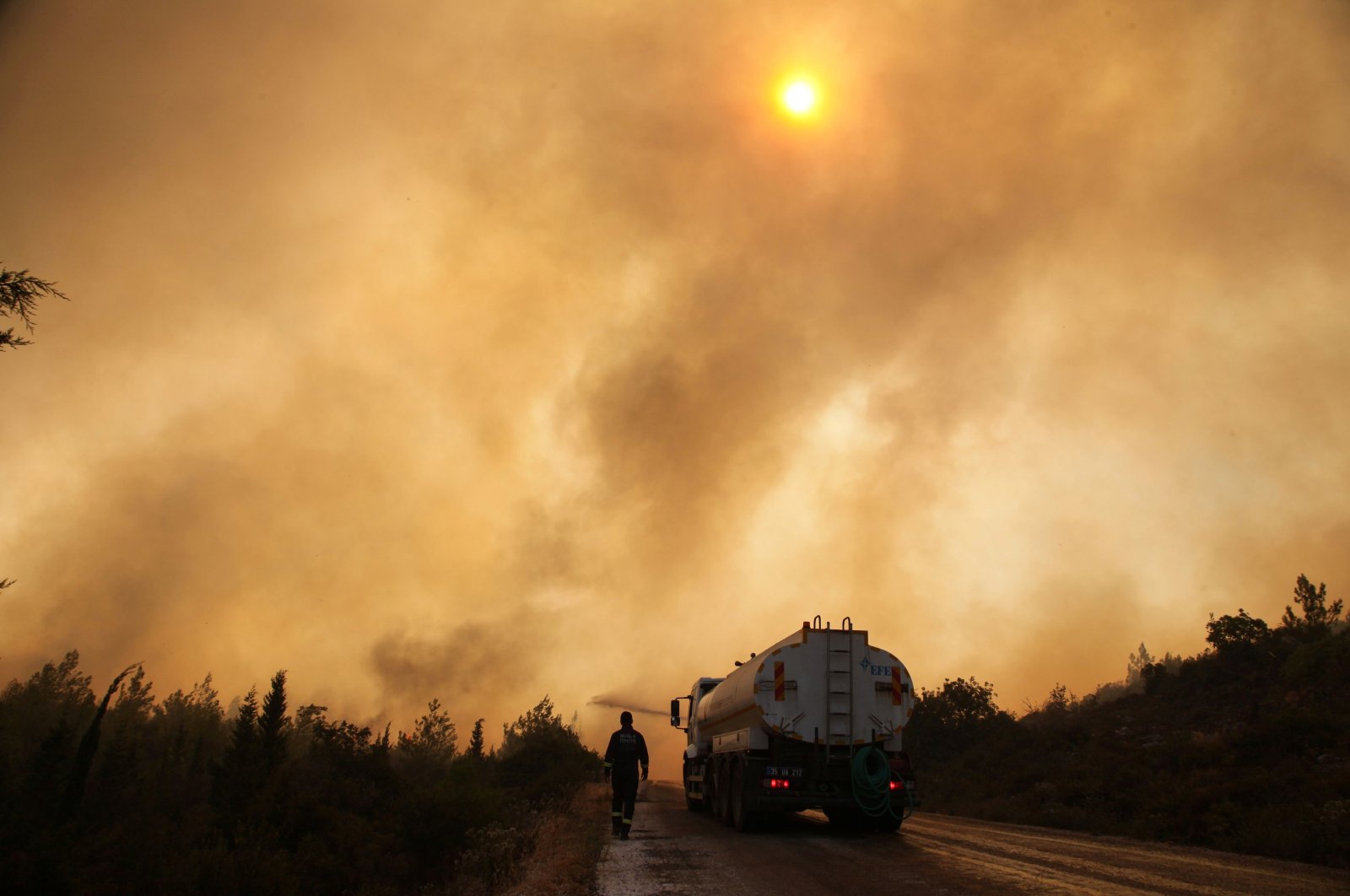 Turkey’s struggle against wildfires continues unabated on the sixth day since the first large-scale blaze. Authorities announced late Sunday that 122 out of 129 forest fires in 35 provinces were under control. Nevertheless, fires ravaging popular tourist resorts Manavgat and Marmaris are still raging, with the death toll rising to eight on Sunday.

Firefighters on the ground tirelessly fight the flames with the aerial assistance of water bomber planes and helicopters, but the extinguishing efforts from air pause at night. On Monday morning, planes and helicopters resumed their operations in Marmaris and Köyceğiz, two towns in the southwestern Muğla province. Strong winds fanned the flames in the province, and forest fires rapidly advanced in Marmaris’ seven neighborhoods. In Köyceğiz, a rural neighborhood is under threat of a massive forest fire.

In Manavgat, the situation is grave as new fires rage on in the area. On Sunday evening, a new fire broke out in the Gündoğdu neighborhood, which was already fighting the fires that broke out last week. Locals joined extinguishing efforts. In some areas, people started patrolling the neighborhoods near forests upon hearing rumors of arson. Multiple investigations are underway over the causes of fires in Manavgat and other towns and provinces, while authorities voiced suspicion that points to the terrorist group PKK’s involvement. Mustafa Yılmaz, a resident of Gündoğdu, told Demirören News Agency (DHA) that he and a few other locals had spotted two people around a small fire in the area where a large fire broke out and notified authorities.

The first fires in Manavgat had begun in four different locations. Over the next six days, more fires erupted in eight different locations. Fires prompted the evacuation of neighborhoods that were subsequently burned completely, leaving hundreds homeless. The government funneled cash aid to the region along with emergency aid and pledged to build new homes for victims.

Another fire also rages in Bodrum, one of the most popular vacation resorts in southwestern Turkey. Local firefighters, aided by backup crews from other cities, are battling the wildfire that began on Saturday in the Beyciler neighborhood and that quickly spread to four rural neighborhoods. Large trees collapsed by the fires are blocking roads and hampering access to fire-hit areas.

On Monday, a delegation of ministers briefed reporters at a wildfire coordination center in the district of Milas. The Minister of Agriculture and Forestry Bekir Pakdemirli said a new blaze broke out in Isparta province while a wildfire in the eastern province of Tunceli’s Hozat district was under control. Pakdemirli said the Manavgat fire was raging on, and they were considering evacuating the Gündoğmuş neighborhood affected by the advancing fire. Pakdemirli also said that although the fire in Marmaris was continuing, it was “stable,” while warning about flames spreading more due to changing weather patterns on Monday afternoon.

Pakdemirli stated that winds, accompanied by temperatures reaching 40 degrees Celsius and above (104 degrees Fahrenheit), challenge the extinguishing efforts. Pakdemirli said they had more than 5,000 personnel, aided by 16 airplanes, 51 helicopters and more than 850 fire trucks. “In Muğla alone, helicopters dumped more than 3,000 tons of waters on flames,” he said.

“We are focusing on residential areas, seeking to prevent fire from reaching them and, unfortunately, we had to abandon trees on fire,” he also said. Pakdemirli also pledged a tree-planting drive in the burned areas, to start as soon as possible.

Interior Minister Süleyman Soylu said law enforcement agencies were investigating the causes of the fires, and they had special teams of investigators in place. “We received about 300 tip-offs about the causes of the fires. We have several people in detention, but ultimately the judiciary will decide whether they are guilty (of starting fires). We have information about sabotage attempts, about negligence which might have caused the fires,” he said. Soylu said that the terrorist group PKK was working to burn forests, businesses and vehicles of civilians and since January and that they thwarted more than 300 such attempts. On the subject of evacuation efforts, Soylu commented that 10,000 people were evacuated in Muğla alone.

This article originally appeared in DAILY SABAH on 02 August 2021.