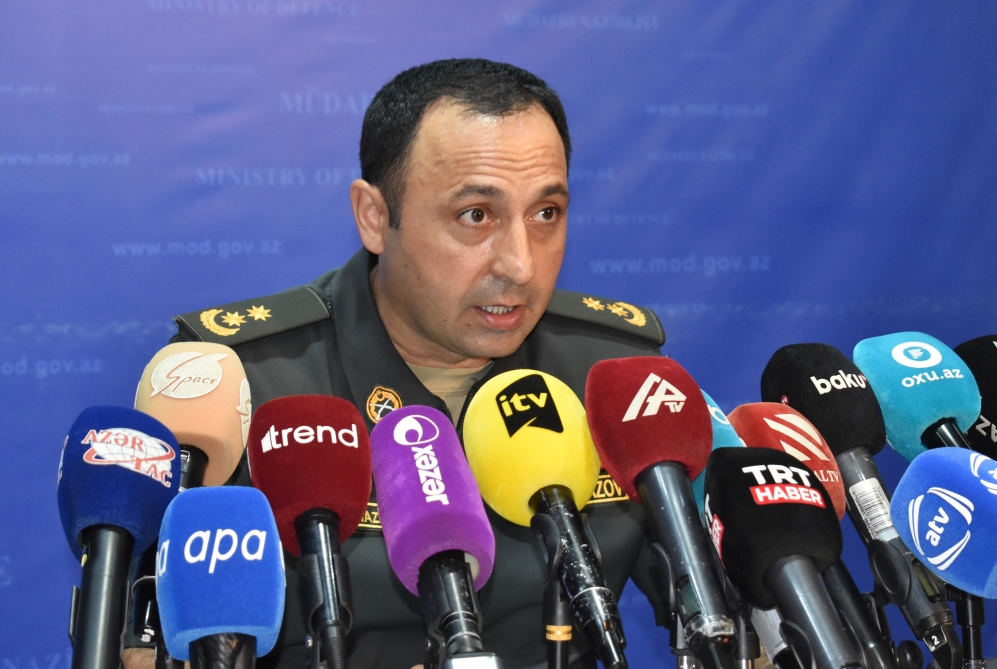 A briefing has been held at Azerbaijan’s Ministry of Defense regarding the large-scale provocations of the Armenian armed forces, according to Azerbaijan in Focus, reporting AzerTac.

Deputy Chief of the press service of the Ministry of Defense, Lieutenant Colonel Anar Eyvazov informed the media representatives about the situation.

“In the late hours of 12 September, units of the Armenian armed forces committed a large-scale act of sabotage in the directions of Dashkasan, Kalbajar and Lachin of the Azerbaijan-Armenia state border. The sabotage groups of the Armenian armed forces, acting in the dark, made use of the mountainous terrain of the territory and the existing ravines in different directions to mine the areas between the positions of the units of the Azerbaijan Armed Forces and supply roads. As a result of urgent measures taken by Azerbaijani units to immediately thwart these acts, a battle flared up.

Certain positions, shelters and bases of the Azerbaijan Army in the territory of Dashkasan, Kalbajar and Lachin districts were fired upon with various types of weapons, including mortars, by units of the Armenian armed forces located in the direction of Basarkecher, Istisu, Garakilsa and Gorus settlements. As a result, there are casualties among Azerbaijani personnel and damage to military infrastructure.

In order to prevent the provocation of the armed forces of Armenia and military threats to the territory and sovereignty of Azerbaijan, and ensure the safety of our military personnel, including civilian workers involved in infrastructure work in the territory of Kalbajar and Lachin districts, resolute retaliatory measures are being taken by units of the Azerbaijan Army deployed in this direction. Necessary measures are being taken to silence the firing points of the Armenian armed forces and prevent the expansion of the scale of the military conflict. There are casualties among the personnel and combat equipment of the armed forces of Armenia involved in sabotage operations.

In general, the provocations of the Armenian armed forces in the direction of Lachin, Gadabay, Dashkasan and Kalbajar districts of the state border, as well as the firing on the positions of the Azerbaijan Army in these districts with various types of weaponry, have been quite intense and systematic in the past month. At the same time, observations show that Armenia had been concentrating its offensive weapons, heavy artillery and personnel along the border with Azerbaijan. All this is further evidence of the fact indicated that Armenia is preparing for a large-scale military provocation.

By resorting to such actions, Armenia aims to slow down the implementation of large-scale civil infrastructure projects Azerbaijan is carrying out in border districts liberated from occupation and to maintain tensions near the border with Azerbaijan. The reports about Azerbaijan’s intervention in Armenia’s territory circulated in Armenian mass and social media are nothing but absurd. The Republic of Armenia is the region’s aggressor and occupying state. The presence of military personnel and equipment of the Armenian armed forces in the Karabakh economic zone of Azerbaijan continues to this day. In response to Armenia’s provocation, the Azerbaijan Army is taking local countermeasures and neutralizing firing points.

Armenia’s ongoing policy of military adventurism and revenge, the intense firing on the positions of the Azerbaijan Army in Kalbajar, Lachin, Dashkasan and Gadabay directions over the past month, as well as the large-scale provocations it committed today, are the main reasons for the escalation of the situation. Therefore, responsibility rests squarely with Armenia’s military and political leadership.

The information spread by Armenia about the alleged shelling of the civilian population, facilities and infrastructure by the Azerbaijani Army has nothing to do with reality. This is another misinformation spread by the Armenian side. The countermeasures taken in response to Armenia’s provocations are local and directed against legitimate military facilities that are firing points. The retaliatory measures are small-scale and targeted and aimed at ensuring the security of Azerbaijan’s borders and stopping the provocations of Armenia.

Targeting civilian objects and innocent people is the standard military methodology used by the Armenian armed forces. During the 30-year occupation and 44-day Patriotic War, it was the Armenian side that deliberately and purposefully fired on Azerbaijani cities and civilians with ballistic missiles and cluster bombs. We declare again that responsibility for the provocation, stand-off and casualties rests squarely with the military and political leadership of Armenia,” Anar Eyvazov said.