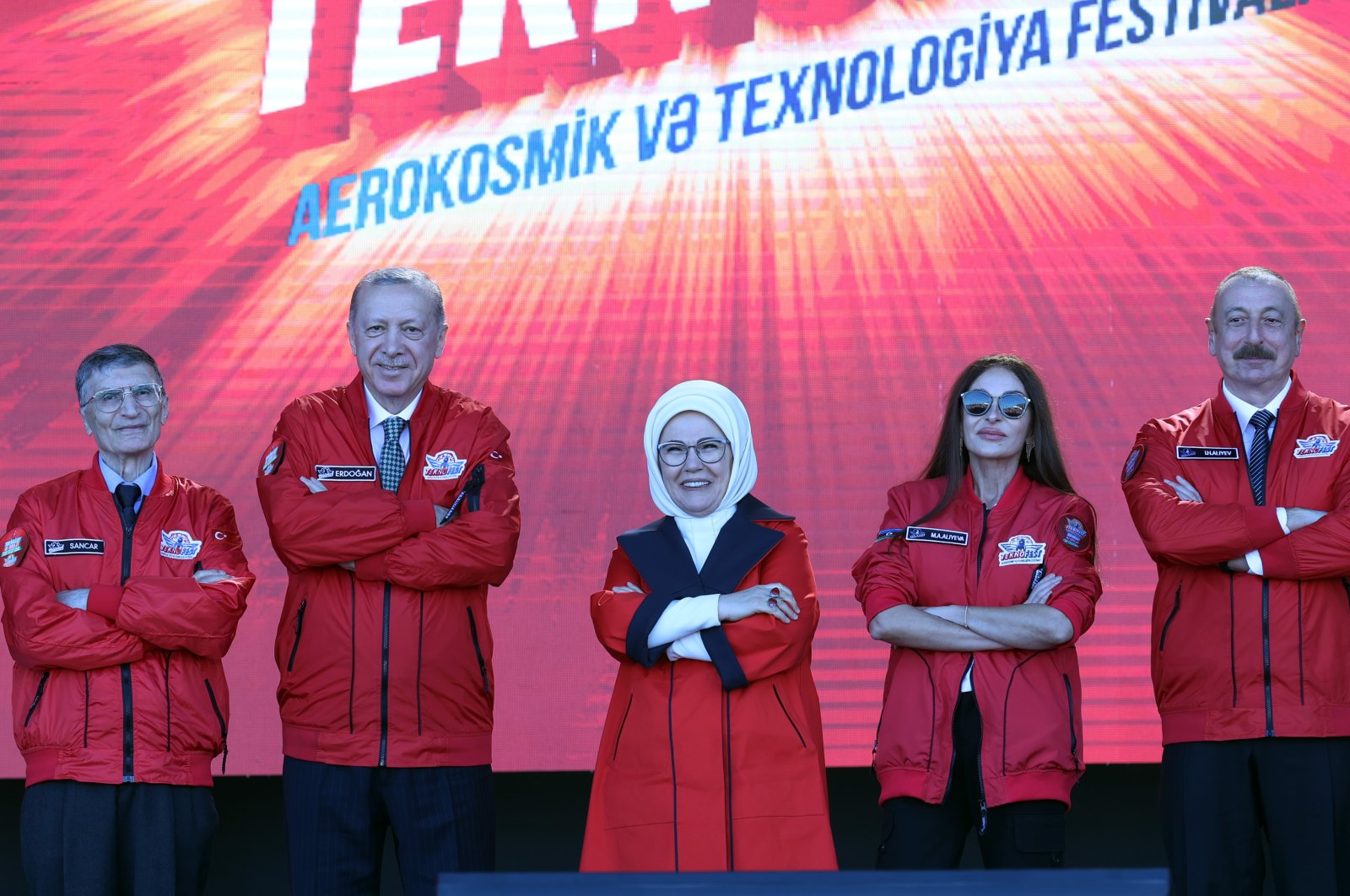 Turkish officials reiterated their willingness to further strengthen the close ties between Ankara and Baku as many dignitaries visited Azerbaijan on Saturday on the occasion of the 104th Republic Day of the southern Caucasus nation, according to Azerbaijan in Focus, reporting Daily Sabah.

Speaking at the first foreign edition of the leading Turkish aviation, space and technology festival Teknofest, President Recep Tayyip Erdoğan said that the Turkish people consider Azerbaijan as their homeland, just like Anatolia or Turkey proper.

Akar extended best wishes to Azerbaijan on its Independence Day and briefed Aliyev about developments and ongoing work on military cooperation between Turkey and Azerbaijan and defense industry cooperation.

Aliyev, for his part, said: “It is a great pleasure to be together with you on Independence Day.”

In the letter, Şentop congratulated the brotherly people of Azerbaijan on the occasion of Independence Day on behalf of the Turkish nation.

“I wholeheartedly believe that the excellent relations between our parliaments will rise to the highest level under the guidance of the understanding of ‘One nation, two states,’” wrote Şentop.

“Our current close cooperation is strengthened not only with bilateral but also with tripartite and multiple formats, and gives new impetus to parliamentary diplomacy.”

‘Turkey considers Azerbaijan’s fate as its own’

Separately in Ankara, Turkish Vice President Fuat Oktay said Saturday that Turkey will never consider its fate to be separate from that of its longtime ally Azerbaijan.

Speaking at an event in the Turkish capital marking the 104th anniversary of Azerbaijan’s Republic Day (May 28) and June 26 Armed Forces Day, Oktay said that Turkey and Azerbaijan are two “brotherly countries” that share a common history, culture, sorrow, and joys.

“May Allah always preserve our fellowship, unity, and solidarity,” he said.

Stressing that Turkey and Azerbaijan share the same spirit today as they did a century ago, Oktay dipped into history, saying: “The spirit we carry is of the brotherhood of the Caucasus Islamic Army, which did not ignore the calls for independence of our Azerbaijani brothers even while the Ottoman Empire was fighting its own national struggle at various fronts of World War I.”

Near the end of World War I, on Sept. 15, 1918, an elite Ottoman force led by Nuri Pasha (Killigil) called the Caucasus Islamic Army was sent to Azerbaijan in response to Azerbaijan’s plea, along with the Azerbaijani National Army and volunteer forces, and liberated Baku from Armenian and Bolshevik occupation, paying the price in the lives of 1,132 people.

Oktay said that with their sacrifices and courage, the “heroes” under the command of Nuri Pasha left a “glorious legacy” in Baku that will be proudly told to generations to come.

On Azerbaijan’s Karabakh region, which was liberated from Armenia’s nearly 30 year-occupation in fall 2020, Oktay stressed that they see it as their primary duty to erase the scars of the occupation, eliminate poverty, and hoist the Azerbaijani flag everywhere like it did in its glory years.

In 1991, the Armenian military occupied Nagorno-Karabakh, also known as Upper Karabakh, a territory internationally recognized as part of Azerbaijan, and seven adjacent regions.

New clashes erupted in September 2020, and the 44-day conflict saw Azerbaijan liberate several cities and over 300 settlements and villages that had been occupied by Armenia for almost 30 years.

Also speaking at the event, Azerbaijan’s Ambassador to Turkey Rashad Mammadov told the guests, bureaucrats, and representatives of foreign diplomatic missions in the country about the history of Azerbaijan.

Mammadov underlined that after Azerbaijan regained its independence on Oct. 18, 1991, it faced deep political, social and economic problems and that Armenia occupied around 20% of the country’s territory, adding that more than 1 million Azerbaijanis were forced to leave their homes and were subjected to forced migration.

Noting that Turkey and Azerbaijan support and make each other stronger, Mammadov said: “Turkey played an exceptional role in the establishment of the current victorious Azerbaijan Army, and our heroic soldiers and officers received high-level education and training together with their Turkish brothers.”

“Therefore, our victory in the 44-day (Karabakh) war can be considered a joint victory of Azerbaijan and Turkey,” he added.

Mammadov highlighted that Azerbaijan invested $19 billion in Turkey, and Turkey invested $13 billion in Azerbaijan, adding that these investments helped consolidate the independence of both countries and reduced foreign dependency.

The envoy also said 2022 also marks the 30th anniversary of the establishment of Azerbaijan-Turkey diplomatic relations.

“There is no precedent anywhere in the world for such interstate relations. As representatives of our state, we will make every effort to further consolidate these relations and to constantly raise them to a higher level,” he said.

The event, which started with a moment of silence and the national anthems of both Turkey and Azerbaijan, offered Azerbaijani cuisine to the guests accompanied by national folk music and traditional dances and performances.

A historic meeting on May 28 in the Georgian capital Tbilisi adopted the six-article Declaration of Independence of Azerbaijan, making Azerbaijan the first parliamentary republic in the Muslim East. Mammad Amin Rasulzade was then chosen a leader of the newly formed republic.

As a beacon of hope for Azerbaijan’s 20th-century independence movement with his saying, “Once raised, the flag never falls!” Rasulzade played a key role in the formation of the modern Azerbaijani identity.

On June 4, 1918, friendly political, legal, trade, and military ties between Azerbaijan and Turkey were solidified shortly after the Treaty of Batumi, signed between the newly established Azerbaijani Democratic Republic and the then-Ottoman Empire.

With the pact, the empire recognized the independence of Azerbaijan, which could in return request its military help in case of any threat.

The newly founded state managed to form a national army on June 26, 1918.

After the republic’s declaration of independence in Georgia, Fatali Khan Khoyski, Azerbaijan’s first prime minister, formed the government in Ganja, now in northwestern Azerbaijan, in June, as he was not able to travel directly to Azerbaijan’s current capital Baku since the city was then controlled by Armenian militants and Bolsheviks, a Marxist revolutionary party.

The Caucasian Islamic Army played a pivotal role in Azerbaijan’s life, the liberation of Baku, and turning the city into the capital.

Baku’s liberation paved the way for the transfer of the capital from Ganja to Baku and ensuring Azerbaijan’s territorial integrity, and set the basis for its contemporary boundaries.

Enver Pasha, then Ottoman minister of war – also an elder brother of Ottoman Gen. Nuri Pasha – personally conveyed the message to the Ottoman Empire that Baku had been liberated from Armenian gangs.

In December 1918, the first decision of the newly established Azerbaijani parliament was to place a monument for the “martyred Ottoman soldiers and officers” at the highest spot in Baku.

Though plan and sketches for the monument were prepared, the Soviet occupation in April 1920 did not allow for its construction. The monument was finally erected in 1999-2000.

Azerbaijan first declared independence from the Russian Tsarist regime but was toppled after almost two years in 1920 by the Soviet Union.

Regarded as the first secular and democratic republic in the East, Azerbaijan made reforms in many fields, including freedom of education, religion, and conscience.

In its Declaration of Independence, the country granted equal rights to all citizens, regardless of race, religion, sect, or gender.

As the heir to the Azerbaijani Democratic Republic, on Oct. 18, 1991, Azerbaijan reestablished its status as an independent state.

Turkey was the first country to recognize Azerbaijan’s independence, and Baku opened its embassy in Turkey in 1992.