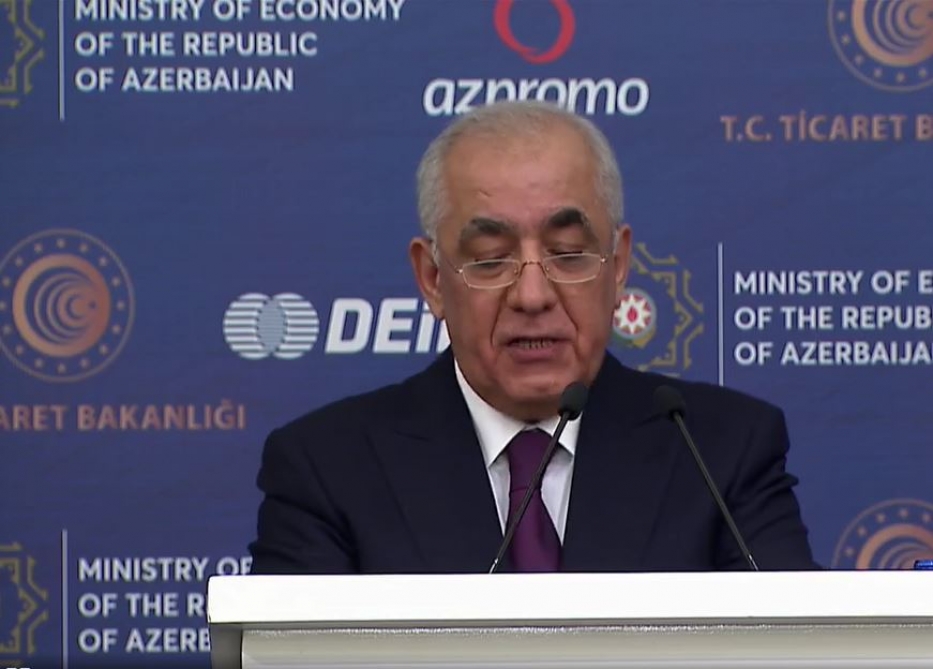 Co-chaired by Azerbaijani Prime Minister Ali Asadov and Turkish Vice President Fuat Oktay, a Turkey-Azerbaijan Business Forum has been held in Ankara, according to Azerbaijan in Focus, reporting AzerTac.

The forum brought together government officials, businessmen and company executives of the two brotherly countries.
Addressing the forum, Prime Minister Ali Asadov described Azerbaijan’s victory in the 44-day Patriotic war as a historic event. He expressed gratitude for the political and moral support provided to Azerbaijan by brotherly Turkey, especially by President Recep Tayyip Erdogan, in achieving the glorious victory.

PM Ali Asadov mentioned that there are currently about 2,000 companies with Azerbaijani capital in Turkey, adding that Azerbaijani businessmen are leaders among the ones from the Caucasus and Central Asia in this regard.

Speaking at the Turkey-Azerbaijan Business Forum, Turkish Vice President Fuat Oktay said that apart from the brotherhood between Turkey and Azerbaijan, the two countries are important political and trade partners.

“Our goal is to find new alternatives for our businesspeople in the face of slowing global economic growth due to the pandemic. Moreover, our target is to overcome weak and fragile growth trends with projects to be carried out with you, our precious brothers,” the Turkish Vice President mentioned.

“In this regard, a crucial duty falls upon the businesspeople of our countries to put the current potential into practice,” he added.
Trade Minister Ruhsar Pekcan stressed the preferential trade deal with Azerbaijan will enter into force as of March 1.

“This is just the beginning. We want it (preferential trade deal) to evolve into a free trade agreement, a target of both sides,” Pekcan added.

“Accordingly, in order to achieve the $15B trade target, the two countries’ business world must actively work with us,” she added.
Noting the importance of mutual investments, Pekcan said Turkey made investments worth $12 billion in Azerbaijan. Moreover, Azerbaijani investments in Turkey reached $19.5 billion.
Pekcan said remarkable financing opportunities for two companies, which were founded by Azerbaijan’s state oil company SOCAR, were provided through Turkey’s Eximbank.

She stated that with the victory of Azerbaijan in Karabakh, a new window of opportunity has opened in Nakhchivan, an autonomous region.
“This corridor is very important for us. Our aim is to make Baku a logistics center — both for the Baku-Tbilisi-Kars railway and on this route. Whatever it takes to make it a preferred route after Turkmenistan’s borders open,” the Turkish minister said.

“Azerbaijan’s victory was the beginning of a brand new era in which the commercial and logistics structure of our region will change,” she stressed.

“Turkish contracting and consultancy companies are ready to cooperate and share their experiences with Azerbaijani business people for the reconstruction of Karabakh,” she said.

“It is not only the duty of Azerbaijan but for all of us to raise the living standards of the people of the region.”

In Azerbaijan, Turkish construction companies are so far involved in 436 projects worth $15 billion, she noted.

Speakers at the event included Azerbaijan’s Minister of Economy Mikayil Jabbarov, Chairman of the Board of the Small and Medium Business Development Agency of the Azerbaijan Republic (KOBIA) Orkhan Mammadov, acting President of Azerbaijan Export and Investment Promotion Foundation (AZPROMO) Yusif Abdullayev, Head of Turkey’s Foreign Economic Relations Board Nail Olpak, Chairman of the DEIK Turkey-Azerbaijan Business Council Selcuk Akat and others. The speakers hailed the healthy environment in the field of business, trade and manufacturing, describing it as a result of cooperation between the two countries.

Following the Turkey-Azerbaijan Business Forum, a total of 11 agreements and a memorandum of understanding were signed between the two countries.