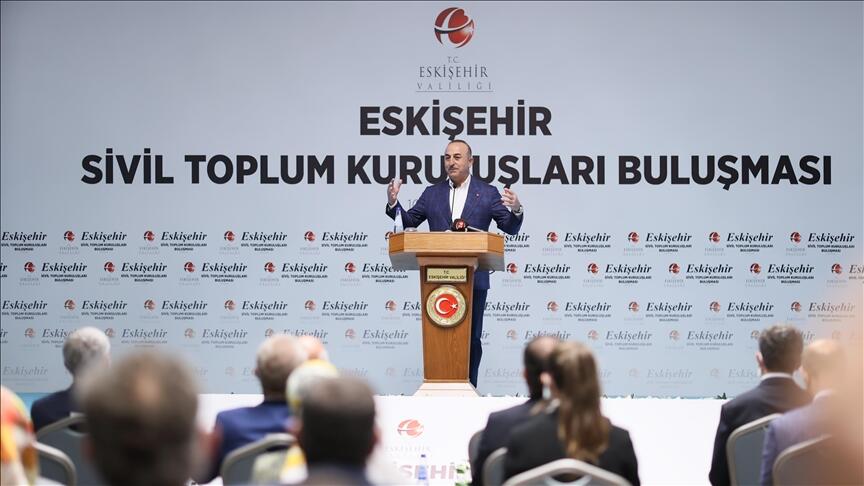 Foreign policy should be determined in line with global developments, analyzing power balance, political and military power and the economy – to which Ankara set its goals accordingly, Turkish Foreign Minister Mevlüt Çavuşoğlu said on Sept. 10.

Çavuşoğlu’s remarks came during a visit to Eskisehir province, where said Turkey’s initial foreign policy based on the “Peace at home, Peace in the world” principle set by founder Mustafa Kemal Ataturk, his companions and the country was following a national, active and humane policy in the current changing global order.

He said there was once a bipolar global system but Asia was now meeting 40% of global production and its contribution to the world economy has reached 50% despite the U.S. will to remain as the dominant power.

“We have seen unilateral policies during the rule of [former U.S. President Donald] Trump. We too bore the brunt of the issues caused by this as well as Europe. NATO itself was also affected. We now observe the impact of unilateral decisions taken in our region and beyond, including Afghanistan,” he said.

Arguing that the global actor was now G20, not the G7, Çavuşoğlu said Turkey should analyze the effects of the multi-polar global system and take steps with regards to foreign policy accordingly.

The international order established following World War II falls short of responding to today’s global issues, according to Çavuşoğlu, who said his country has been following a more realistic foreign policy.

He went on to note that Turkey wanted to operate the Hamid Karzai International Airport in Kabul, as requested by the then-government in Afghanistan, however, the Taliban abruptly gained control of the country before parliament took action.

“We concluded our evacuation, and there was no reason to leave soldiers … so, we withdrew,” he said, adding there were still about 4,000 Turkish workers in Afghanistan while some companies and workers sought to remain. “We have briefed our citizens [on risks],” he said. “If they want to return tomorrow, we will bring them back.”

The minister said that Ankara warned the US about the PKK and its Syrian branch, YPG, but Washington ignored Turkey’s warnings and continued to provide weapons to the terrorists, which triggered Turkish military operation in the region.

Turkey has taken an initiative not just in Syria, but in Libya, the Eastern Mediterranean and Caucasus, according to Çavuşoğlu, who noted that the unresponsiveness of the MINSK trio did not bear any fruit for about three decades, but Azerbaijan managed to regain control of its territories following a 43-day fight against Armenia.

Turkey’s presence across the globe grows sharply, especially in Africa where it has 43 embassies and its TIKA aid agency has a regional office on the continent where Turkish Airlines flies to 60 cities.

On the other hand, Çavuşoğlu was critical of the EU, saying the bloc was making things difficult and was not sincere in its policies as it has stalled Turkey with regards to accession to the EU.

As for the Eastern Mediterranean, Çavuşoğlu said any platform excluding Turkey has no validity or value, adding that collaboration with Ankara was a must to realize any project and his country was not a play-maker.

Çavuşoğlu concluded his remarks with developments in Crimea, whose annexation it has never recognized. He said Turkey is determined to defend the rights of Crimean Tatars while also standing as one of the prominent countries in that case.

This article originally appeared in Hurriyet Daily News on 11 Sep 2021.