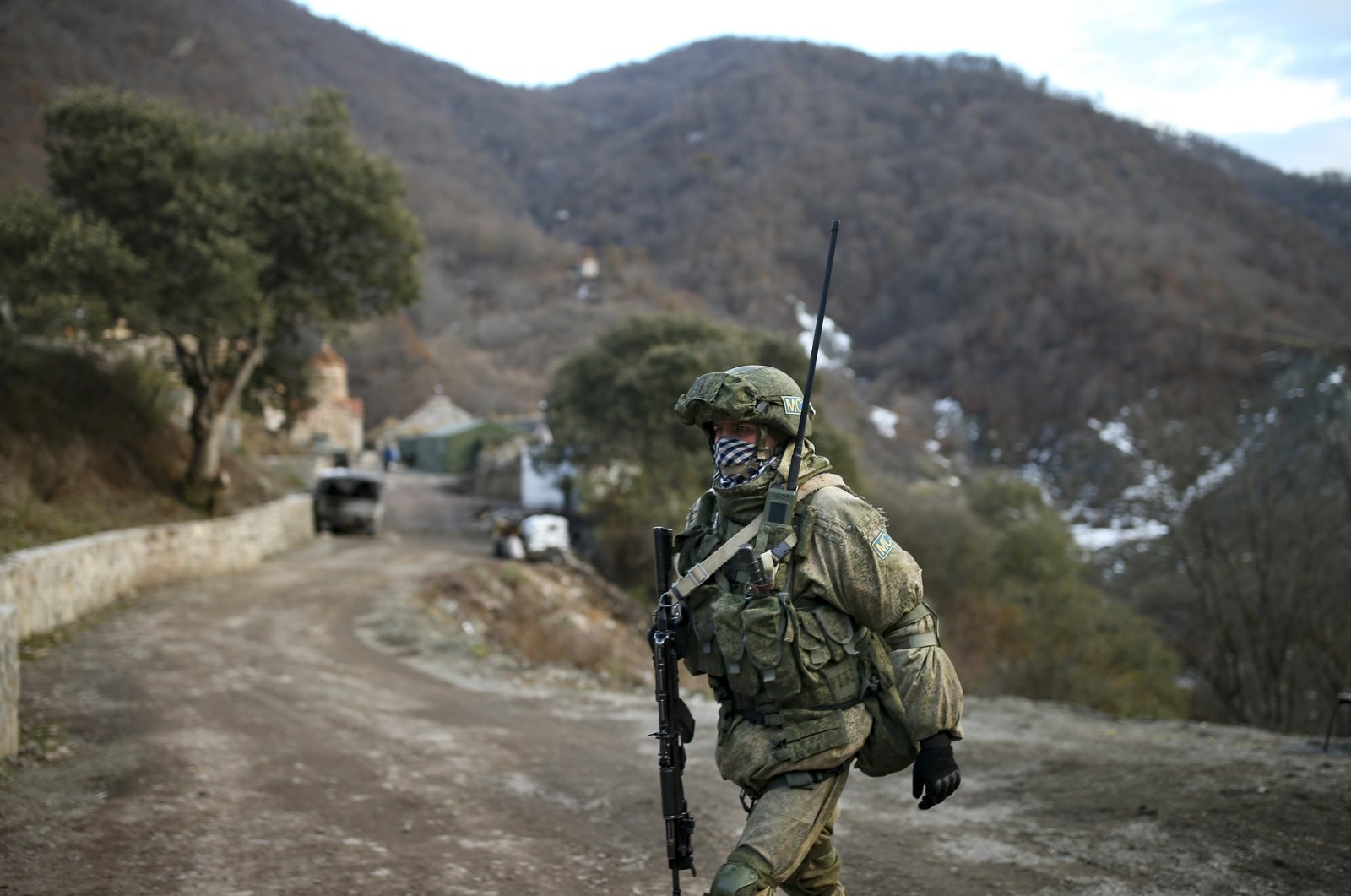 A Russian peacekeeper guards an entrance of the Dadivank, an Armenian Apostolic Church monastery dating to the 9th century, after the transfer of the Kalbajar region to Azerbaijan's control, near Kalbajar, Azerbaijan, Wednesday, Dec. 2, 2020. (AP File Photo)

Armenia announced a cease-fire on the border with Azerbaijan, according to defense ministries of Russia and Armenia on Tuesday.

Azerbaijan and Armenia took steps to stabilize the situation on their borders, said a written statement by the Russian Defense Ministry.

It said the clashes in Karakilise have ceased and the situation is currently back to normal and under control.

“As of 5.30 p.m (1330GMT) with the mediation of Russia, a cease-fire was declared on the Azerbaijan-Armenia border,” the Armenian Defense Ministry said.

Putin and Pashinian agreed to stay in contact, the Kremlin said in a written statement.

Meanwhile, Defense Minister Zakir Hasanov told Russian Counterpart Sergei Shoigu that Azerbaijan will continue to stop military provocations by Armenia, as Yerevan announced that it has declared a cease-fire after carrying out attacks on the Lachin and Kalbajar areas.

In the phone call, Shoigu told Hasanov that Russia was ready to stop Armenia’s military operations near the border and ensure stability.

Armenia’s defense ministry said that a cease-fire had been announced at the Armenia-Azerbaijan border after Russia’s mediation, following a clash at the frontier, the Interfax news agency reported Tuesday.

Armenia has been attacking Azerbaijani positions to take over some areas and has been shelling the positions. Two Azerbaijani soldiers were injured in attacks, and Azerbaijan has taken the Armenian soldiers who carried out the attacks hostage, Anadolu Agency (AA) reported.

Shoigu also held a phone call with his Armenian counterpart, the Interfax news agency quoted his ministry as saying on Tuesday.

Armenia asked Russia to help defend it against Azerbaijan, after a border clash in which it said 15 of its soldiers had been killed, 12 were captured and two combat positions had been lost. According to Azerbaijan, workers were shot at by Armenian forces two days ago as they built border fortifications.

Meanwhile, EU chief Charles Michel urged the leaders of Armenia and Azerbaijan to call a “full cease-fire” after escalation on the border.

Michel, the president of the European Council, said he had spoken to President Ilham Aliyev of Azerbaijan and Prime Minister Nikol Pashinian of Armenia.

Michel did not apportion blame for the “challenging situation in the region,” but demanded an “urgent de-escalation and full cease-fire.”

“EU is committed to work with partners to overcome tensions for a prosperous and stable South Caucasus,” he tweeted.

At the U.N., deputy spokesperson Farhan Haq said: “We urge all sides to exercise restraint … and address any related concerns peacefully through dialogue.”

“We want to avoid any return to the sort of escalation we had earlier,” Haq added.

Earlier, Armenia had reported that some of its troops had been killed and that it had lost control of two military positions near the Azerbaijan border.

Azerbaijan accused Armenia of provoking the clash by attacking positions, and said two of its own soldiers were wounded.

Relations between the former Soviet republics of Armenia and Azerbaijan have been tense since 1991 when the Armenian military occupied Nagorno-Karabakh, a territory internationally recognized as part of Azerbaijan, and seven adjacent regions.

Azerbaijan then launched a counteroffensive operation, later dubbed “Iron Fist,” which led to the 44-day conflict ending with the liberation of Azerbaijani lands from the nearly three-decade occupation of Armenian forces.

During the 44-day conflict, Azerbaijan liberated several cities and nearly 300 settlements and villages from the nearly three-decade Armenian occupation.

This article originally appeared in DAILY SABAH on 17 Nov 2021.