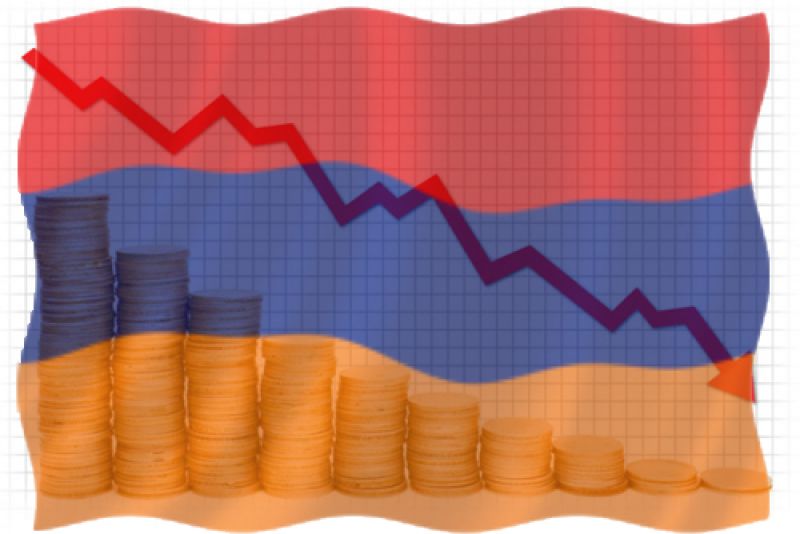 The war of 2020 in Karabakh, which ended with the defeat of the Armenian army in early November, and the ongoing rallies and civil confrontation in Armenia could not but affect the economic performance of this country, according to Azerbaijan in Focus, reporting Turan News.

In the previous article, we showed, using the figures of the official statistics of Armenia and the Armenian community of Nagorno-Karabakh, the potential economic losses of the Armenian economy as a result of the loss of the agricultural sector and extractive industries in the territories liberated by Azerbaijan.

In this article, relying on the data of the State Statistics Committee of Armenia and economic articles by Armenian authors, we will try to show the impact of the war and the internal Armenian conflict on the economy of this country. The data for December 2020 are not yet known, and the reader should only take into account that after summing up the December indicators, the overall decline in the Armenian economy will be even more impressive.

On December 25, the State Statistics Committee of Armenia presented macroeconomic data for the past 11 months – from January to November inclusive. In 2020, Armenia’s economy was hit by, so to speak, three months of war and post-war national stress – October, November, December. There are no data for December yet. But we must not forget the coronavirus, the disastrous march of which across Armenia was already in January-April 2020. In these months, in comparison with the same period last year, the country’s economic activity went into negative territory (98.3%), and then, worsening from month to month, the drop in 8 months reached 93.6%, in 9 months – up to 93.4%, and in 10 months – up to 93.3%. If we take into account that during the 2nd and 3rd quarters the Armenian economy was sagging, then it can be stated that the country has already fallen into recession (the economy has fallen for 2 quarters in a row), Golos Armenii emphasizes.

In terms of the growth rate of the volume of industrial production following the results of 9 months, Armenia had exactly 101%, and with the inclusion of October this figure passed another half percent – 100.5%. With each subsequent month of the war and post-war events, the rate of industrial growth fell. For 11 months, industry, one of the few spheres that was still in a small positive zone, went into minus – 99.8%.

A decrease in growth rates was recorded in the field of electricity production: in January-August – only 101.9%, in January-September even less – 101.5%, in January-October this indicator slightly improved – to 101.7%, and in January -November added a little more – 101.8%. In fact, of all macroeconomic indicators, only electricity production still retains a small positive value (the Armenian Statistics Committee publishes data on gross agricultural volumes on a quarterly basis, so they will also become available at the end of January 2021).

In the construction sector, a decline of 86.7% was recorded over 10 months, and November kept the pace of decline by a couple of percent (88.8%). The construction industry indicators are falling with a double-digit minus – 11.2% compared to the same period last year.

Official inflation actually amounted to 101%, which is below even the lowest threshold of the government’s target level (102.5%). At the same time, real food inflation in double digits is raging in the country. It is enough to look into the first supermarket you come across.

“One month remains until the end of the year. It is unlikely that during this time, the Pashinyan government will be able to at least slightly correct the situation in the degrading economy. For this, in conditions of total public apathy and stress, there is neither a suitable background, nor suitable personnel in the reserve of Pashinyan’s cabinet. Under normal conditions, a certain revival of economic activity could be expected on the eve of the New Year holidays, but this is still a big question today. Business expects only a worsening of the situation – right up to the collapse of the economy,” journalist Ashot Aramyan predicts.

You can look into 2021, given the political events of the outgoing month. Pashinyan announced his intention to hold early parliamentary elections, one of the leaders of the separatist regime in Karabakh, Balasanyan, promised to return Hadrut and other regions to the Armenians, and the idea of becoming a Union State with Russia was thrown into Armenia. You don’t need to be a visionary to know the upcoming heat of political confrontation in Armenia, and maybe a new war with Azerbaijan. And the economy of the state is directly dependent on stability in society.