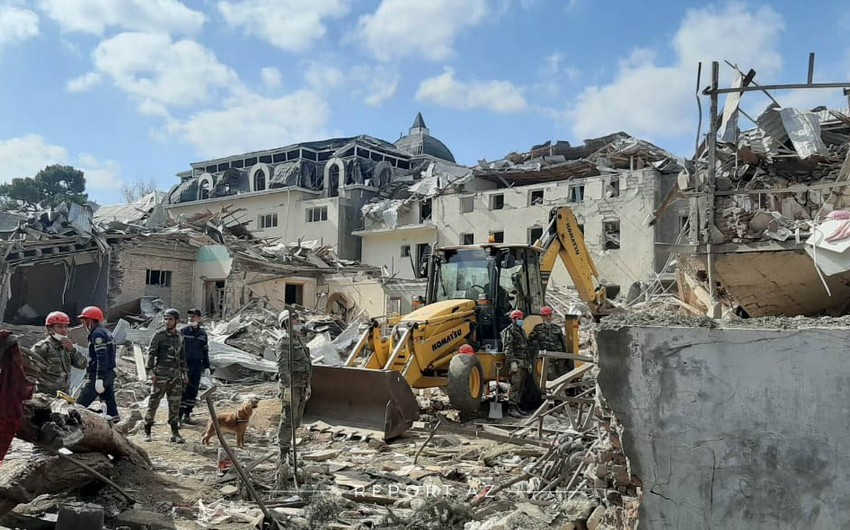 In the ongoing conflict over Nagorno-Karabakh, civilians have too often become casualties, easy targets in the latest bid to escalate hostilities. An Armenian missile attack on Ganja, Azerbaijan’s second largest city, flattened several homes on the early morning of Saturday, killing at least 13 civilians asleep in their beds, writes Taleh Baghiyev.

Truth too has become a casualty in this conflict. Even after Armenia’s missile had killed several civilians in a large city far from the front line, the Armenian government refused to even acknowledge the atrocity.

This fits into Armenia’s disinformation campaign, where they have used the techniques perfected by ally Russia to twist every story or propagate false narratives in order to sow doubt in the public’s mind, to attack the credibility of their opponents and to encourage conspiracy groups.

Nagorno-Karabakh is internationally recognised as Azerbaijan’s territory. Despite four United Nations’ resolutions calling for Armenia to withdraw, Armenia has refused to comply. It continues to occupy Nagorno-Karabakh, along with seven adjoining districts of Azerbaijan that Armenia captured in the war in the early 1990s.

The biggest mistruth that Armenia attempts to propagate is that Armenia is somehow the victim, that Azerbaijan is somehow the aggressor. The fact that Armenia has occupied 20% of its neighbour’s territory, and has refused to return it for three decades, is forgotten every time an Armenian leader reminds the West of “genocide”, by recalling the collapsing Ottoman empire’s events of 1915.

However, a century later, it is Armenia that is carrying out ethnic cleansing in Nagorno-Karabakh. Over half a million Azerbaijanis has been driven from their homes in Karabakh, and forced to live as Internally Displaced People in Azerbaijan, unable to return to their lands occupied by Armenia.

This fact is conveniently forgotten by the likes of Kim Kardashian, and other members of Armenia’s influential diaspora, who are painting this conflict to American audiences as one between a Christian country (Armenia) attacked by a Muslim one (Azerbaijan). This simplistic analogy could not be further from the truth.

Nagorno-Karabakh was never wholly Christian – Armenia has carried out ethnic-cleansing to remove its large Muslim population. And Azerbaijan has strong secular traditions, with prominent Christian and Jewish minorities.

Yet we are seeing a social media campaign by Armenia to whip up hatred in Armenian society against Azerbaijanis. Fake pages on social media have posted videos of Armenians brutally beating and killing wounded Azerbaijani prisoners. Such scenes were filmed by their Armenian captors, most likely by military intelligence officers themselves, with Armenia’s Ministry of Defence spreading them on social media through Russian-style troll factories. Employees of Armenia’s Ministry of Defence, trained in Russian propaganda techniques, are trying to antagonise Azerbaijanis as they did with the Khojali massacre in 1992 when Armenian forces killed over 600 Azerbaijani civilians, including women and children.

The quote by former Armenian President Serzh Sargsyan in the book “Black Garden: Armenia and Azerbaijan through Peace and War” by Thomas de Wall, provides further insight into the Armenian mindset: “Before Khojali, the Azerbaijanis thought that they were joking with us, they thought that the Armenians were people who could not raise their hand against the civilian population. We were able to break that stereotype. And that’s what happened.”

It is clear that military operations will eventually end and peace will have to be established, with Armenians and Azerbaijanis learning to live together again. However, these external forces are trying to make it impossible for the two nations to reconcile with one another in the future by intensifying the hatred between their peoples.

In Nagorno-Karabakh itself, several Russian bloggers are currently operating to serve the purposes of Armenian propaganda. This includes Semyon Pegov, who had previously operated in much the same way in Russian-controlled eastern Ukraine. His War Gonzo channel on Telegram clearly betrays strong links with Russia’s GRU agency.

It is no coincidence that Telegram messenger, which is popular in Russia, has been chosen for Armenia’s propaganda activities. The West has already been targeted by Russian disinformation through social media, such as the 2014 shooting down of Malaysia Airlines flight MH17, the 2018 Novichok poisoning in Britain and interference in the 2016 US election. In much the same way, Armenian propaganda is now being disseminated in Europe through Russian-affiliated institutions.

The West should call out Armenian disinformation for what it is, to show how untenable Armenia’s position is. With international law unequivocal about the status of Nagorno-Karabakh, Armenia’s desperate attempt to hold on to it through a disinformation campaign, masks a growing realisation within Armenia that it has already lost the moral high ground.

Taleh Baghiyev, is a publishing executive, Founder of UK-based Visible Press, Managing Editor of Visions of Azerbaijan magazine and author of numerous books on Nagorno-Karabakh, including “Armenian Question in the Caucasus” and “Khojali Tragedy: An International View”.

This article originally appeared in EU Political Report on 22 Oct 2020.