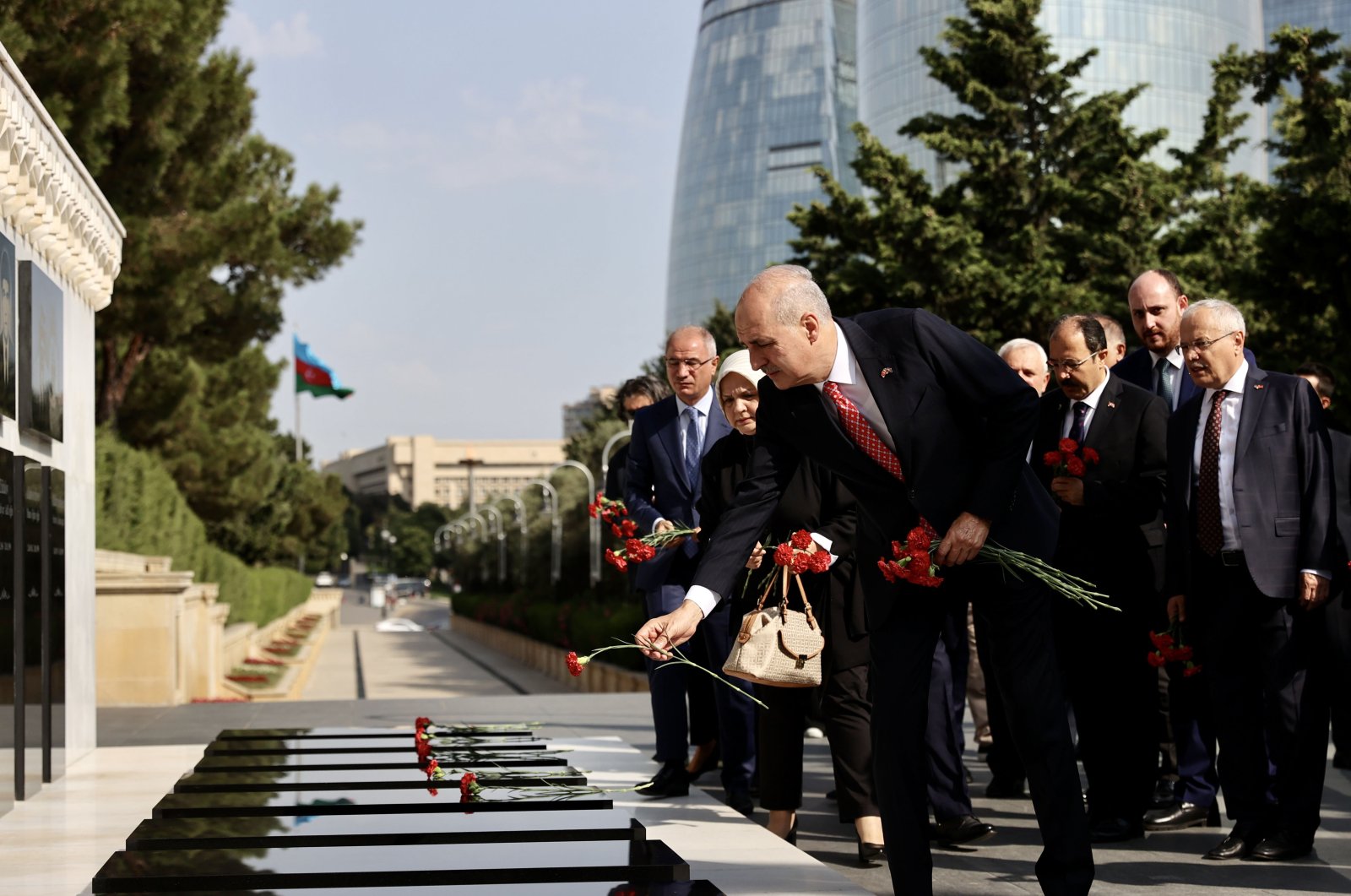 ‘Armenia should not rely on non-regional powers for solution’

Armenia should give up its habit of seeking support from countries outside the region to help it resolve regional problems, Turkey’s ruling Justice and Development Party (AK Party) Deputy Chair Numan Kurtulmuş said Monday.

An AK Party delegation led by Kurtulmuş is paying a 4-day official visit to Azerbaijan’s capital Baku. On the first day of their program, the delegation visited the sites dedicated to the country’s martyrs.

Kurtulmuş and his accompanying delegation first visited the grave of the late President Heydar Aliyev.

After laying a wreath on the grave, Kurtulmuş visited Baku Martyrs’ Lane, which is dedicated to those killed by the Soviet Army during Black January 1990 and in the First Nagorno-Karabakh War of 1988–1994. The delegation then proceeded to the Baku Turkish Cemetery, where the representative graves of the Caucasian Islamic Army martyrs are located. Kurtulmuş laid a wreath at the monuments of martyrdom and signed the Baku Turkish Martyrdom’s memorial book.

In a statement to the press after visiting the sites, Kurtulmuş said that they came to Azerbaijan to confirm and further strengthen the relations between the AK Party and the New Azerbaijan Party (YAP).

Stressing that the excellent relations between Turkey and Azerbaijan continue, Kurtulmuş said that the Turkish people sided with Azerbaijan with all their might during the glorious struggle last year that lasted for 44 days, and that Turkish President Recep Tayyip Erdoğan had supported Azerbaijan’s struggle to end the occupation in Karabakh from the very first moment.

Noting that the occupation, which lasted for decades, was ended due to the stance of Azerbaijani President Ilham Aliyev and the courage of the people, Kurtulmuş wished mercy to those who were martyred in the war.

Underlining that with the joint determination of Turkey and Azerbaijan they will make an effort to make the region a region of peace and well-being, Kurtulmuş said: “Armenia should give up the habit of getting support from countries outside the region to solve the problems. I believe that the six countries suggested by our President after the Karabakh victory – Turkey, Russia, Iran, Azerbaijan, Armenia and Georgia – to create a joint platform and solve the problems in the region among themselves is the best way. The way to solve the problems between Azerbaijan and Armenia is to maintain the peaceful environment established after the war.”

It is necessary to solve the problems by talking and negotiating, he said, adding that: “They (Armenia) should have understood that creating tension against Azerbaijan by relying on other countries and using the power of the diaspora in other countries does not benefit the Armenian people either. I see that it is more correct for Armenia to act more cautiously in the next period, also in terms of their own future.”

A six-country regional cooperation platform would be a win-win initiative for all regional actors in the Caucasus, President Erdoğan said following Azerbaijan’s victory against Armenia over the occupied Karabakh region in late 2020.

Ankara has pledged its full support to Baku in its efforts to liberate its lands from Armenian occupation. About 20% of Azerbaijan’s territory had been under illegal Armenian occupation for nearly three decades. In the most recent conflict that began on Sept. 27, Azerbaijan took back much of the land in and around the Nagorno-Karabakh enclave that it lost in a 1991-1994 war that killed an estimated 30,000 people and forced many more from their homes.

Following the Nov. 10 signing of a Russia-brokered agreement to end the fighting and work toward a comprehensive resolution, Turkey agreed with Russia that its troops would also monitor the cease-fire. Ankara and Moscow signed an agreement to establish a joint observation center in Nagorno-Karabakh as soon as possible.

This article originally appeared in DAILY SABAH on 26 July 2021.