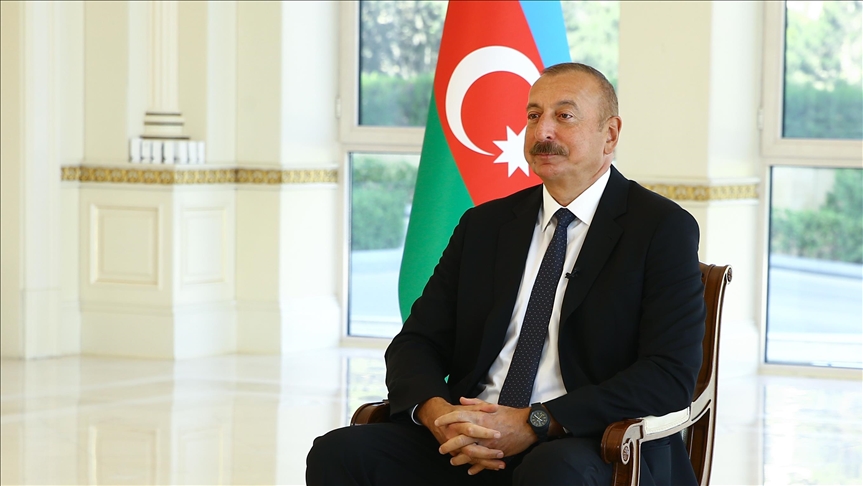 Armenia should strive to normalize relations with Azerbaijan: President Aliyev

Armenia would have left occupied territories if international community had pressured them, says Azerbaijan's president

Armenia should accurately analyze the post-war period and make more effort to normalize relations with Baku, Azerbaijan’s president has said, referring to the Nov. 10, 2020, Russian-brokered cease-fire agreement to end the Nagorno-Karabakh conflict.

In an exclusive interview with Anadolu Agency, Ilham Aliyev evaluated Sept. 27, the first anniversary since the second Karabakh war erupted in the region, saying the war erupted last year when Armenia’s provocations against Azerbaijan had become regular.

“Their statements towards us and the steps they took showed that Armenia was preparing for a new war. I have not been able to understand the reasons for this until now because if a state that has occupied the territory of another state for 30 years wants a new war, the reason for this should be investigated very seriously.

“In July (last year) on the Azerbaijan-Armenia border, Armenia made a military provocation where 13 soldiers and civilians lost their lives as a result. At that time, Azerbaijan gave the enemy the answer it deserved, but we did not cross the state border. We simply drove them out of the Azerbaijani lands they had entered and the conflict, which lasted several days, was over,” Aliyev said.

The president recalled that a group of saboteurs was sent in August that year which crossed the “line of contact” — which was formed in May 1994 and separated the Armenian forces and the Azerbaijan Armed Forces since the first Nagorno-Karabakh war — and Azerbaijani soldiers disarmed them. He stressed that in his speech at the UN General Assembly the previous year, he had said that Armenia was preparing for a new war.

“Three days later, our positions and settlements were again under artillery fire. We had martyrs again, and under my command, we started a large-scale counterattack operation, and as you know, this operation resulted in a great victory,” he said.

Aliyev said the war would have been prevented if the Minsk Group of the Organization for Security and Co-operation in Europe (OSCE) had put serious pressure on Armenia, which would have had to leave the occupied territories.

“Although the three states co-chairing the Minsk Group are permanent members of the UN Security Council, they did not apply this pressure. These are considered the most powerful countries worldwide. Didn’t they have the political power and political means to send these serious messages to Armenia?” Aliyev said.

He said those countries preferred a policy of “neither war nor peace.”

Aliyev said he had previously repeatedly applied to the co-chairmen of the Minsk Group and other “powerful states” to impose sanctions on Armenia.

“That would have prevented the war because these sanctions would have caused great difficulties for Armenia and they would have had to leave our lands. We used all means to solve the problem peacefully,” he said.

Normalization process between Azerbaijan and Armenia

After the Nagorno-Karabakh region, which is internationally recognized as Azerbaijani territory, was liberated through a deal following a 44-day war with Armenia, it entered a period of an economic revival thanks to new transportation lines.

According to the deal, all transportation lines that were closed due to the Karabakh issue will reopen. In this period, the Zangezur corridor, which was mentioned by President Aliyev several times, came to the forefront.

He said the Zangezur corridor was a must for the normalization process, noting that this was declared in the Karabakh agreement.

“Armenia took this obligation. If it does not fulfill this obligation, then what kind of normalization can take place? Armenia should analyze the post-war period very accurately. Now the situation is completely different. The current situation clearly shows the ratio of forces. During the occupation, we knew what opportunities both we and the Armenian army had.

“We knew long ago that we had shifted the balance in our favor. Now the whole world sees it. Therefore, in the current situation, I think that Armenia should make more efforts to normalize its relations with Azerbaijan because this is important to them,” Aliyev said.

Aliyev underscored that Armenia must understand the reality today and should soon accept Azerbaijan’s terms and resolve this issue so that everyone knows its borders.