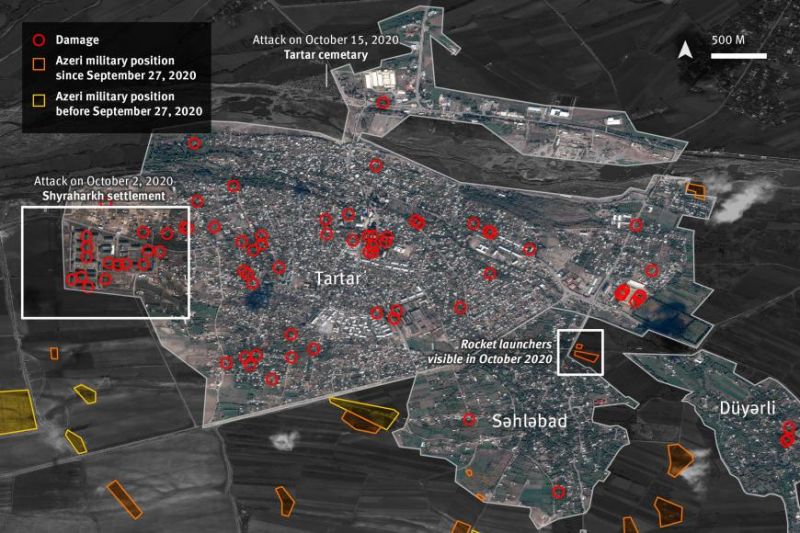 Armenian military forces carried out unlawfully indiscriminate rocket and missile strikes on Azerbaijan during the hostilities from September to November 2020, Human Rights Watch reported today, according to Azerbaijan in Focus, reporting Turan News.

During on-site investigations in Azerbaijan in November, Human Rights Watch documented 11 incidents in which Armenian forces used ballistic missiles, unguided artillery rockets, and large-caliber artillery projectiles that hit populated areas in apparent indiscriminate attacks. In at least four other cases, munitions struck civilians or civilian objects in areas where there were no apparent military targets.

“Armenian forces repeatedly launched missiles, unguided rockets, and heavy artillery into populated cities and villages in violation of the laws of war,” said Hugh Williamson, Europe and Central Asia director at Human Rights Watch. “Again and again in the course of the six-week war, these attacks unlawfully destroyed civilian lives and homes and should be impartially investigated.” 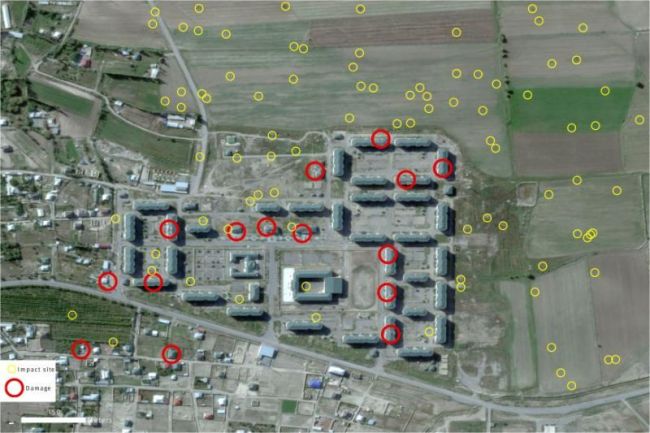 Fighting between Armenia and Azerbaijan escalated on September 27 and continued until November 10, when the prime minister of Armenia and presidents of Azerbaijan and Russia signed an agreement to end the hostilities.

Human Rights Watch investigated missile, rocket, and artillery attacks by Armenian forces that struck cities, towns, and villages in Aghdam, Barda, Fizuli, Ganja, Goranboy, Naftalan, and Tartar in Azerbaijan. This report examines 18 of these strikes, which killed 40 civilians and wounded dozens more, based on in-person interviews with 53 witnesses to attacks and 12 phone interviews, news reports, and governmental data. Human Rights Watch could not determine the lawfulness of three of the 18 attacks. 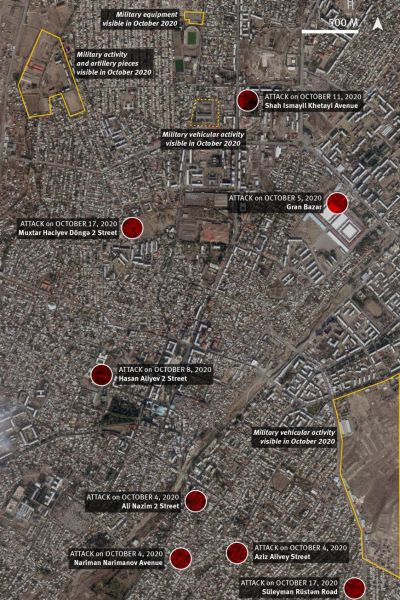 Human Rights Watch also examined satellite imagery of 10 of the 17 attacks and photos and videos posted on social media from the site of nine of the attacks, which corroborated the time and date of the attacks, and the scale of destruction. Other attacks will be addressed in future reports.

Satellite imagery revealed that Azerbaijan military forces were present in the cities of Ganja and Tartar and the villages of Gashalti and Tapgaragoyunlu, which Armenian forces attacked. Azerbaijan unnecessarily put civilians at risk by locating military objectives within or near densely populated areas and failing to remove civilians from the vicinity of military activities, Human Rights Watch said. However, the presence of military objectives did not permit Armenia to use inherently inaccurate explosive weapons with a large destructive radius in populated areas.

The governmental Azerbaijan National Agency for Mine Action (ANAMA) found that unguided Smerch artillery rockets and Scud-B ballistic missiles were used in attacks on Ganja between October 4 and 17, killing 32 civilians. Scud-B missiles, which can carry a 985-kilogram, high-explosive warhead, can miss their intended target by at least 500 meters. Attacks using weapons that cannot be directed at a specific military objective and so do not distinguish military targets from civilians and civilian objects, are indiscriminate, violating the laws of war.

In addition to causing civilian casualties, the Armenian attacks damaged homes, businesses, schools, and a health clinic, and contributed to mass displacement. According to the Azerbaijani prosecutor general’s office, 98 civilians were killed and 414 wounded during the armed conflict, and over 3,000 homes and 100 apartment buildings were destroyed or damaged. Azerbaijani government officials told Human Rights Watch that fighting displaced 40,000 people. Residents from conflict-affected areas that Human Rights Watch visited said that many people, especially women and children, had fled to safer areas.

The laws of war require attackers to issue effective warnings of attacks affecting civilians unless circumstances do not permit. Witnesses to attacks said they were not aware of warnings from Armenian or local Nagorno-Karabakh forces. On October 4, Arayik Harutyunyan, the Nagorno-Karabakh president, issued tweets in English calling on civilians “to avoid inevitable loss” by leaving “large cities,” including Ganja, where military forces would be attacked. Threats of attacks on unspecified targets over an unspecified period, in a language few Azerbaijani civilians can read, were not effective warnings.
Human Rights Watch previously reported Armenian attacks on Barda on October 28 that killed 21 civilians and wounded 70, and documented Azerbaijan’s use of cluster munitions in at least four incidents in Nagorno-Karabakh as of October 23.

The Armenian government should conduct impartial, thorough, and transparent investigations into attacks by Armenian forces that appear to violate international humanitarian law, or the laws of war.
States are currently in the process of negotiating a political declaration that would commit them to refrain from using explosive weapons in populated areas. Azerbaijan and Armenia should endorse such a political declaration, Human Rights Watch said.

“Armenian forces fired hugely destructive, inaccurate weapons into Azerbaijan’s cities, towns, and villages,” Williamson said. “Accountability for these and other apparent violations of the laws of war by both sides is critical if the region is ever going to move beyond this vicious, decades-long conflict.”

For details of the attacks and violations of the law of war, please see here.