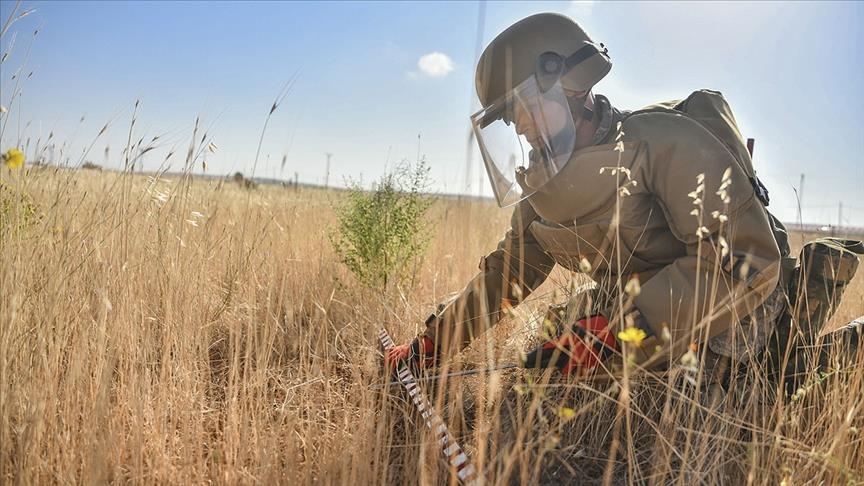 Armenia sowed the seeds of destruction during its 3 decades long occupation of Karabakh. In every respect Armenia’s presence on this land proved poisonous: Its possession of its neighbour’s land ruined its own economy and led to a great exodus of its people; its incapability of doing anything in terms of development led Armenia to simply pillage Karabakh of its many resources, leaving behind a wasteland; its desire to maintain a hold of territory, without the means to sustain it, meant Armenia has traded its independence for dependency; its revanchism resulted in a total intransigence that led to its ultimate military defeat in the Fall of 2020.

Armenia proved incapable of trading land for peace during its occupation of Karabakh and surrounding districts. Instead it destroyed and mined the territories it was incapable of developing, so that no one else could enjoy the riches of the region. It sowed a deadly harvest in the fields of Karabakh that has remained after it was forced to withdraw last year. These are the mines which continue the war, after Armenia’s defeat. This is Armenia’s legacy to the land it supposedly loves as its own. Their landmines have resulted in the deaths of nearly 30 people in the last 6 months and the maiming of over 100 more.

There are basically 3 types, or purposes, of land-mining activity:

Protocol II of the Convention on Certain Conventional Weapons (an annex to the Geneva Convention), as amended in 1996, regulates, but does not ban the use of mines. It prohibits or restricts the use of landmines (both anti-personnel and anti-vehicle), booby traps and certain other explosive devices. Breaking these Rules is considered a War Crime under the Geneva Convention.

Under the General Rules of the Protocol regarding landmines the following acts are prohibited:

using mines, booby traps and other devices if they are of a nature to cause unnecessary suffering or superfluous injury (Art. 3(3))

directing these weapons against civilians or civilian objects (Art. 3(7))

using these weapons indiscriminately (Art. 3(8)). Parties to the conflict which use mines, booby traps and other devices must: remove them following the end of active hostilities (Arts 3(2) and 10), take all feasible precautions to protect civilians from their effects (Art. 3(10)), maintain records on the locations of such weapons (Art. 9)

Under the Specific rules of the Protocol:

Anti-personnel mines other than those delivered remotely must be equipped with self-destruction and self-deactivation mechanisms unless they are (Art. 5): a. placed within a perimeter- marked area monitored by military personnel and protected by fencing or other means, to ensure the effective exclusion of civilians from the area, and b. cleared before the area is abandoned. Among their general obligations, States must take all appropriate steps, including legislative and other measures, to prevent and suppress violations of the Protocol by persons or on territory under its jurisdiction or control (Art. 14).

The few studies done on the military effectiveness of mines have shown that they are largely ineffective in determining the results of wars. Actually, the mine layers usually lose. All the mines do is leave behind an appalling humanitarian legacy which mainly disrupts and destroys the lives of innocents who are prevented from living normal lives without fear of losing them.

The problem with this law is who enforces it? Most states do not wish to forgo or strictly limit the use of landmines. All major states still support the use of landmines when they see fit. They continue to make, sell and stockpile mines for future use. When Princess Diana began a campaign against the use of landmines she was described as a “loose cannon” by a British government Minister. Shortly afterwards she was killed in a tragic accident. Although her son, Prince Harry, continues her work in this sphere, he is no longer part of the British Royal Family.

There are no international mechanisms available for obliging mine layers to co-operate in the decomissioning of the mines they laid. It has been left to the responsibility of the victim states to bear the human and financial costs of clearing up the dirty work of the perpetrators.

In the meantime, calls need to be continually made for the international community to pressurise Armenia on the matter of its mines in the liberated territories.

The main reason why Armenia must hand over the maps containing details of its mining operations is because in terms of the peace process Armenia’s attitude to its mines is a litmus test of its commitment to peace building.

Mines are a particularly harmful weapon to peace and reconciliation. They effectively continue the war for years after its conclusion. Most weapons are decommissioned from a conflict once an armistice is signed. However, by killing people continually, years after the conflict’s formal end landmines will maintain bitterness and hamper the building of good relations among different communities. Azerbaijanis who cannot return to their homes and work their land again, who see their children killed by Armenian mines will not be enthusiastic about building good relations with their neighbours.

The international community could certainly help by pressurising Armenia into handing over the maps of their minefields. Why does the US Congress not attach this condition to Armenia for the receipt of further financial aid? It is quick enough to punish other states for much less in terms of behaviour. Why doesn’t the EU do likewise? Russia certainly has the power to bring Yerevan to heel.

This is not a punishment of Armenia – it would represent a valuable contribution to peace and reconciliation of people and the building of peace in the Southern Caucasus. That is surely in the interests of all, Armenian and Azerbaijani.