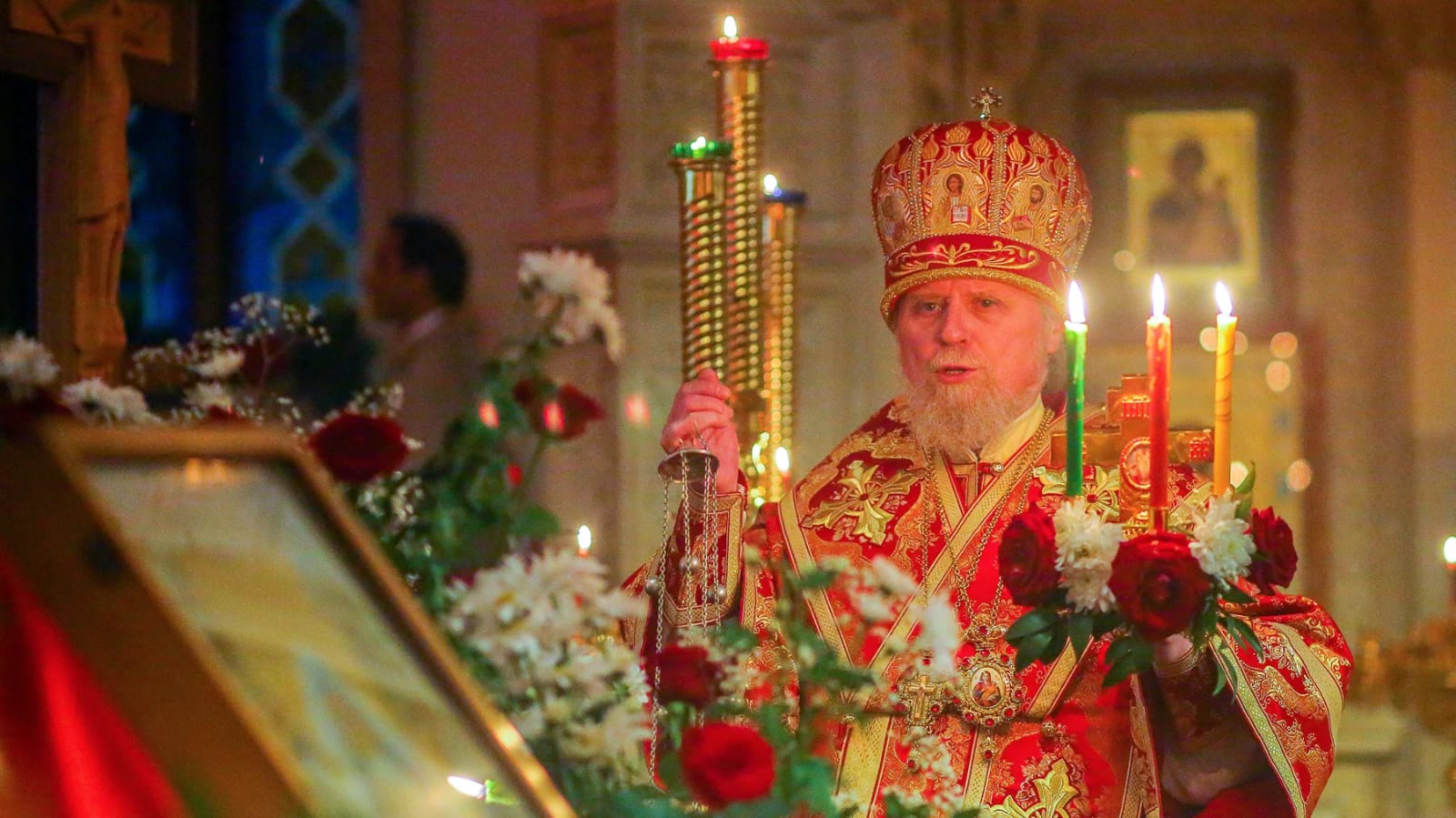 Image: Aziz Karimov / Getty Images. Archbishop Alexander of the Baku-Azerbaijan Diocese of the Russian Orthodox Church prays during a 2020 Easter service at the Holy Myrrhbearers Cathedral in Baku, Azerbaijan.

Azerbaijan Archbishop: Our Holy Mission Is to Keep Peace

Editor’s note: CT’s previous coverage of the Nagorno-Karabakh conflict can be found here.

The saying is clear: To the victor go the spoils.

And morally, with them comes the burden of peace.

In November, Christian-heritage Armenia surrendered to Muslim-majority Azerbaijani forces besieging the Caucasus mountain area of Nagorno-Karabakh. The ceasefire agreement ended a six-week war that cost each side roughly 3,000 soldiers and left unsettled the final status of the Armenian-populated enclave they call Artsakh.

Azerbaijan, however, recovered the rest of its internationally recognized territory, including the historic city of Shushi. The first Karabakh war ended in 1994 and displaced hundreds of thousands from their homes on both sides.

Archbishop Alexander, head of the Russian Orthodox Church in Azerbaijan, reached out to CT to promote a process of reconciliation.

It will not be easy.

Azerbaijanis returning to Adgam, left in ruins by Armenian occupation for 25 years, will see for the first time the damage to their city once inhabited by 30,000 people. Its mosque was relabeled “Persian,” while 63 of Nagorno-Karabakh’s 67 mosques are said to be razed to the ground.

Meanwhile, Catholicos Karekin II, head of the Armenian Apostolic Church, issued a plea to save the ancient heritage of Armenian church properties lost in the war. In 2005, a gravesite containing sixth-century khatchkar crosses was destroyed in the Azerbaijani enclave of Nakhchivan.

Azerbaijan has pledged to preserve them. But the United Nations’ cultural arm UNESCO stated that its authorities have failed to respond to several requests to deploy an independent fact-finding mission.

Meanwhile, members of Azerbaijan’s Christian Udi minority were dispatched to hold services in the ninth-century Dadivank Monastery. The Udi are related to the Caucasian Albanian Christians, assimilated into other ethnic groups a thousand years ago. But Azerbaijan maintains the churches of the region are actually Albanian, and not Armenian in origin.

International academics find it difficult to examine all the historical sources. But one nonaligned expert stated the theory has “little currency outside of Azerbaijan,” calling it “bizarre.”

Efforts at reconciliation must also overcome the trauma of war.

Alexander, elevated to archbishop in 2012, is not a neutral peacemaker.

Early in the war, he signed an Azerbaijani interfaith letter congratulating President Ilham Aliyev on his military victories. A later letter pledged that Azerbaijan was not seeking the displacement of Armenians in Nagorno-Karabakh and offered them autonomy.

But after the war, amid claims of Azerbaijan erasing Armenian cultural heritage, a third letter endorsed the Albanian origin of churches and defended the nation’s multireligious character.

Aliyev has since retracted the offer of autonomy.

Of Azerbaijan’s population of 10 million, 96 percent are Muslim—roughly two-thirds Shiite and one-third Sunni. Alexander’s Russian Orthodox represent two-thirds of Christians, while over 15,000 Jews date back to the Old Testament era.

A peacemaker, however, does not need to be neutral, only committed.

Speaking through a translator, Alexander described his experience of past good relations between Armenians and Azerbaijanis, his hope for future economic cooperation, and his present willingness to meet with Catholicos Karekin II:

What is your vision for reconciliation?

We are both eastern Christian communities, and we have much in common.

At the same time, 1,500 years of separation between the Eastern Orthodox church and the Armenian Apostolic church has complicated relations. We have holy books and traditions in common, but we are not in fellowship.

Both of us have been living among Muslims since Islam was introduced in our region. But the manner of living has been very different. The Orthodox church in Azerbaijan found a way to live together with Muslims, but Armenians did not.

Relations were not always like this. Thirty years ago, many Armenians lived here in Azerbaijan, and they had their own churches where they could pray. The proof of these good relations are mixed marriages between them. Peoples in the same geographical areas have to find ways to live together, and not focus on their differences.

This is the main principle for how future relations between these two nations can be built. France, Germany, and Poland are an example. They endured many wars, but now they are all in one European Union.

What is Azerbaijan prepared to do to heal the wounds of this conflict?

Peace between the countries is a way to avoid the isolation Armenia suffers, with Azerbaijan, and perhaps with Turkey.

Transportation networks can be built, helping Armenian development. Political, economic, and cultural areas of cooperation exist with the south Caucasus nation of Georgia. Azerbaijan has repeatedly invited Armenia into this network, with the one condition of returning the occupied territories.

Azerbaijan has a high level of multicultural acceptance and preserves its religious monuments. The Armenian churches and libraries in Baku are kept safe. In the case of a peace agreement, these can be used again, as they should. This will also help the spiritual and religious reconciliation.

In Matthew, Jesus says if your brother has something against you, then you must go to him to be reconciled. Armenians have issues against Azerbaijanis. Even if they are wrong, how can Azerbaijani Christians reconcile in Christ after this conflict?

Unfortunately, Armenians have lied to themselves.

Baku had a whole Armenian quarter in the Soviet era, living in better condition than other citizens. I travel to Russia, Georgia, Belarus, and other nations, and I see that Armenians raised in Baku communicate with Azerbaijanis as friends. They are very sorry they had to leave.

Are you able to make a phone call to Catholicos Karekin II?

I know him, and we have had many discussions. But I don’t have his phone number [smiling].

What would you want to say to him now, in order to help make peace?

I would tell him he has respect in Azerbaijan as a religious leader. He can do a lot to reduce the tensions and hate that Armenians have toward Azerbaijan. So much depends on him.

What would you want the Catholicos to say or do in this time of conflict?

It is a time to stop discussions about negative issues, and to discuss common ground together—what unites us, not divides. Our common ground can be a common future: cooperation in economy, culture, and human rights.

In order to have peace with God, we must confess our sins. In times of war, both sides have sinned against each other. If you agree, what is it that Azerbaijan can apologize for, and seek forgiveness?

It is complicated. Islam as a religion has no confession. Of course, both sides did many negative actions.

As for confession, there is the example of Poland and Germany. They needed 50 years to understand that they were wrong during World War II. This is why we need peace, the building of new life. Only after this can we gain such a realization.

We need years, maybe a dozen years. That is why it is difficult to speak of confession right now.

Many Armenians are fearful of a new genocide. It does take many years to create peace, but God is greater than politics. Spiritual peace can come before political peace. Perhaps neither Islam nor the government have the capacity for confession. But it might help Armenians if you were able to confess some of the sins of your nation.

I carefully listened to your question.

Azerbaijanis still remember its ethnic character. That is why I think it is impossible to use the term in this situation. We will have accusations from both sides.

If there is to be peace and reconciliation, especially between Christians, then Armenians must apologize for their role. But what can be said from the Azerbaijan side, as the victorious party in this current conflict?

It is an interesting question.

We remember that in the first Karabakh war, Azerbaijan lost.

That is why they won the first war, without resistance from the Azerbaijani side.

But these bloody events did not happen according to the will of Azerbaijani people; it was the will of ex-Soviet leadership.

In the first Karabakh war, we cannot say that Azerbaijan bears responsibility for these events. It was the Soviet leadership that created the negative situation in the south Caucasus.

In 1990, our cathedral church was totally destroyed by a missile. That has nothing to do with Azerbaijanis or Armenians. It is the responsibility of the Soviet military that entered Baku.

People from those times must confess. Both Azerbaijan and Armenia are their victims. So it is ridiculous to say that Azerbaijanis and Armenians cannot live together. Azerbaijanis do not have hate in their heart.

But as for the lands and the territory, the rule is strict. What is mine is mine, and yours is yours. That is why we had this recent war.

Jesus also said that when your brother sins against you, you must go to him privately. Armenians have sinned against Azerbaijanis. Will you be willing to go to Armenia and speak with the Catholicos?

I could speak to him face to face, in private. If the conditions are right, I will go.

The Bible also says: Blessed are the peacemakers, for they will be called sons of God. Our holy mission is always to keep peace.

But it is better to do it on neutral ground.

Beside the Catholicos, there is also a nation. Citizens of Armenia are very tense at this moment. They have made many negative statements against the Catholicos, their prime minister, President Putin, and of course against Azerbaijan.

But a meeting in a neutral place is possible.

This article originally appeared in CHRISTIANITY TODAY on 05 Jan 2021.