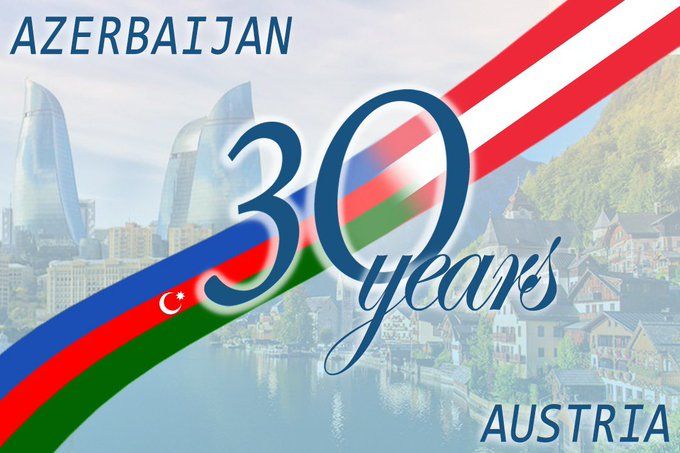 Austria is one of the nations with which Azerbaijan has been developing strong ties as a trusted European partner. Official Baku attaches importance to Austrian support in the process of Euro-Atlantic integration and close cooperation with the European Union. As a country that plays an important role in the world economy and politics, the Federal Republic of Austria supports the expansion of cooperation with Azerbaijan in all sectors.

The Austrian-Azerbaijani relations started from quite early times in history. In 1473, Uzun Hasan, the ruler of the Azerbaijan Aq Qoyunlu state, hosted a delegation from the Austro-Hungarian Habsburg Monarchy. After some time, Uzun Hasan dispatched Niccolo Orolo as his ambassador to Vienna and attempted to strengthen diplomatic ties.

Over the 30-year-long period of diplomatic relations, the two countries have been able to build strong ties based on partnership in the economic, cultural, and educational spheres. For the convenience of our readers, we are trying to shed light on specific aspects of the relations in a Q&A format.

Q: When did Azerbaijan and Austria establish diplomatic relations?

A: Austria and Azerbaijan have enjoyed good bilateral relations since 1992. On January 15, 1992, Austria recognized Azerbaijan’s independence and the two nations established diplomatic relations on February 20, 1992. On September 1, 1995, Azerbaijan opened its embassy in Austria. In 1998, Austria laid the foundation for the intensification of bilateral relations with the opening of the embassy for the South Caucasus and Central Asia, and the peak of this process was the inauguration of the Austrian embassy in Baku on June 10, 2010.

Q: What are the common points between the two states regarding the territorial integrity issue?

Q: What do we know about the two nations’ bilateral political ties and cooperation?

A: Relations between Azerbaijan and Austria have positive development dynamics. Mutual visits at the level of presidents, members of parliament, ministers, and heads of various state structures have been very important in the development of relations between the two countries.

The signing of the “Joint Declaration on Friendship and Partnership between the Republic of Azerbaijan and the Republic of Austria” on May 13, 2013, during the official visit of Aliyev to Austria, was an important event in bilateral relations. The opening ceremony of the Azerbaijani Cultural Center was also held during the visit.

In 2018, the Austrian-Azerbaijani Cooperation Council was established in Vienna. Within the framework of the visit of Ilham Aliyev to Austria on March 28-30, 2019, the first meeting of the Council’s Advisory Board, consisting of government members of both countries, was held in Vienna.

The Azerbaijani-Austrian Inter-parliamentary Working Group has been functioning in the Azerbaijani Parliament since December 13, 2005. Tahir Mirkishili, a member of the parliament, serves as the group’s chairman, which is consisted of 16 deputies.

In total, forty-one documents have been signed between Azerbaijan and Austria.

In addition to bilateral political consultations, meetings of the intergovernmental Joint Commission are held regularly for the purpose of intensifying economic relations. Azerbaijan is given special value as a reliable partner in Austria’s multilateral disarmament initiatives at the UN.

The aim of the EaP is to provide partner countries with expert advice and financial support for their reforms in order to bring them closer to the EU’s political and economic norms and values.

Q: What type of economic ties do the two countries have?

Azerbaijan mainly imports special vehicles, iron or steel tins, medicines, including veterinary drugs, and equipment for the textile and leather industries, as well as for the processing of food products and feedstuff from Austria and exports petroleum products, raw cotton, fresh and dried fruits and vegetables, rusty metal products.

The Joint Commission for Economic, Agricultural, Industrial, Technical and Technological Cooperation between Azerbaijan and Austria was established in 1999.

The Austrian-Azerbaijani Cooperation Council (CCAA) was established in Vienna in November 2018 as a platform for cooperation between the public and private sectors of the two countries. The first meeting of the CCAA Advisory Board, which consists of the Azerbaijani-Austrian government members, was held as part of President Ilham Aliyev’s visit to Austria on March 30, 2019.

The Azerbaijani-Austrian business forum has been held as part of the 10th meeting of the joint commission on economic, agricultural, industrial, technical, and technological cooperation between the two countries in Baku on May 16, 2022.

During the meeting, the participants discussed the current state of economic, scientific, and technical cooperation between the two nations.

Despite the dominant role of oil and gas in Azerbaijan’s economy, the country is making great efforts to diversify and modernize this sector. With its position as a transport hub on the route from China to Europe and from Russia to the Persian Gulf, Azerbaijan has become a strategically important partner not only for Austria but even for the whole of Europe.

On May 10, 2022, ADY Container LLC, a subsidiary of Azerbaijan Railways, and Austrian Rail Cargo have signed a memorandum of understanding and cooperation.

Within the framework of the document, the sides will work together to ensure uninterrupted and rapid delivery of multimodal rail freight from Europe via the Baku-Tbilisi-Kars railways, as well as from the Romanian port of Constanta to the Georgian port of Poti and then to Central Asia and China.

The trade turnover between Azerbaijan and Austria amounted to $220.6 million in 2021.

Q: What is the extent of cultural cooperation between the two countries?

A: Azerbaijan-Austria friendship societies operating in Vienna, Graz, Salzburg, and Linz have a significant role in developing cultural relations between Austria and Azerbaijan. Days of Azerbaijani Culture were organized in Austria in 2002 and 2005.

A monument to the great Azerbaijani composer, Uzeyir Hajibeyov was erected in Vienna, as well as his famous “Arshin Mal Alan” (The Cloth Peddler) musical comedy was staged at Vienna Chamber Opera Theater.

A series of events, titled “Literary Bridge Connecting the Turkic World” has been launched in Vienna jointly organized by the International Turkic Culture and Heritage Foundation and the Embassy of the Republic of Azerbaijan in Austria in 2022.