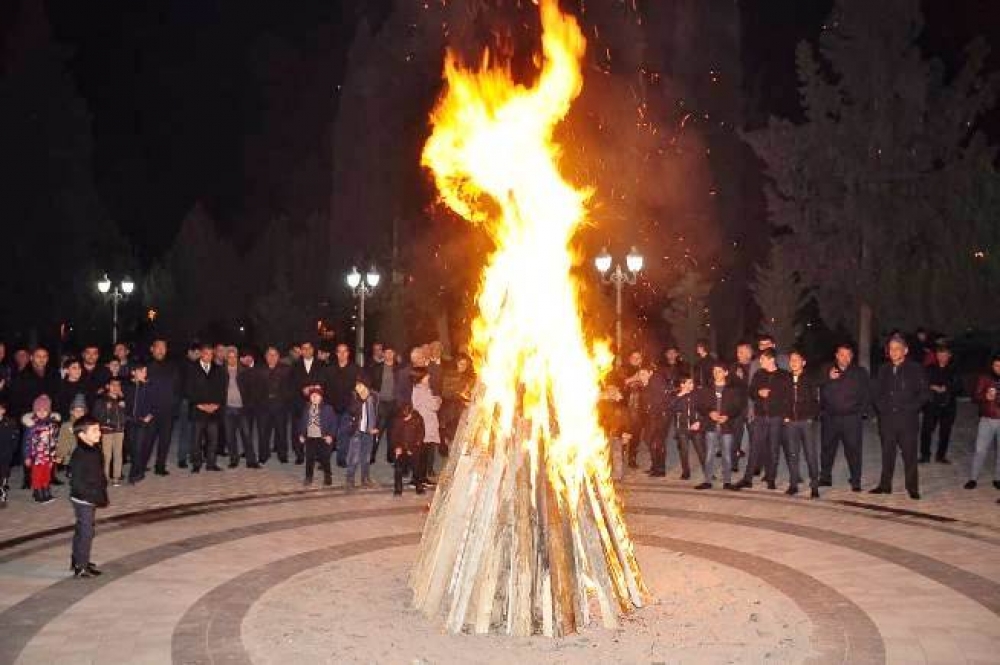 Today, Azerbaijan is celebrating the Earth or Last Tuesday (Ilakhir Charshanba), one of the four festive Tuesdays before Novruz Holiday, according to Azerbaijan in Focus, reporting AzerTac.

Each Tuesday has its own traditions. Folk belief has it that water purifies and stirs, fire, earth and wind awaken the nature, and trees begin to blossom, symbolizing spring’s arrival.

The Last Tuesday differs from others in its importance and grandeur. This Tuesday is not just a holiday, but also Azerbaijanis’ favourite and most sacred day of the year, when they demonstrate the best of their characteristics – benevolence, hospitality, humanity and others.

One of the essential features of the Last Tuesday is Khoncha (xonça) – a tray filled with sweets, nuts, candles, and other treats. Each of the sweets baked for Novruz has a symbolic meaning. Pakhlava represents the four parts of the world, goghal – the sun, shakarbura – the moon, and the eggs painted for Novruz are a symbol of life. Samani (green sprouting wheat) decorates the middle of the tray and is tied with red ribbon.

On this Tuesday various ceremonies, games and entertainment are performed to ease and cleanse and provide the psychological and aesthetic foundation for a new spirit in the new year.

In Papaqatdı (hat throwing), children put hats under neighbors’ doors and hide, waiting for the neighbors to fill the hats with holiday favors.

Young people and children also enjoy games such as dasmalatdi (throwing kerchief), shalsallama (shaking the shawl), gurshagatdi (throwing the belt) and gurshagsallama (shaking the belt). Kosa-Kosa, Chovgan (polo), Fincan-Fincan (cups), Gashig oyunu (game with spoons) and clashing eggs.
On all four Tuesdays and on the eve of Novruz, and especially on Fire Tuesday, it’s traditional to light bonfires, dance around them, and jump over them to cleanse the souls and ward off evil spirits.

The Novruz Tuesday traditions, rituals and entertainment have an important role in the culture of Azerbaijan. They are rooted in the distant past and reflected in historical and archaeological findings such as the rock drawings of Qobustan.

Novruz holiday is one of the most important and favourite holidays of the Azerbaijani people. It marks the arrival of spring, renewal of nature, and is celebrated on the vernal equinox, March 20-21 – the beginning of the astronomical New Year.