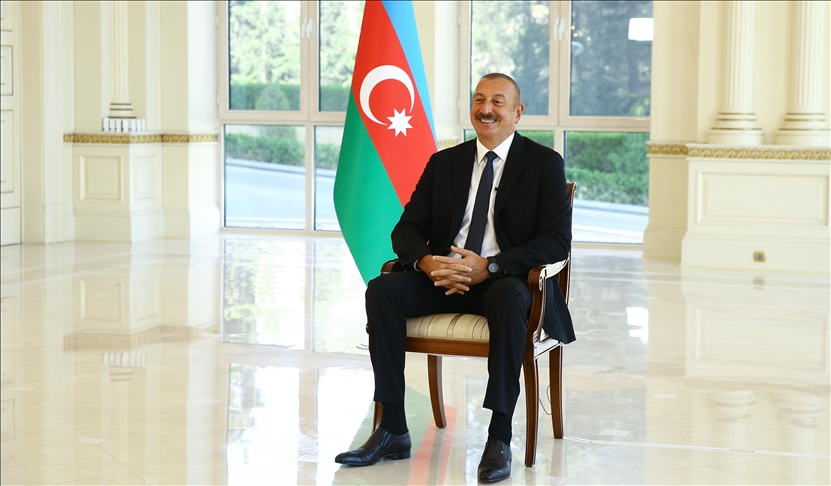 Victory over Armenia will go down in history forever, Aliyev says in Remembrance Day speech

Azerbaijan’s historic triumph in Karabakh last year was a victory for justice that restored our national pride, the country’s president said in an address to the nation on Monday.

“The second Karabakh war is part of our glorious history. This victory will go down in history forever. The Azerbaijani Armed Forces restored our territorial integrity by crushing the enemy in just 44 days,” Ilham Aliyev said.

Azerbaijan is observing Sept. 27 as the Remembrance Day to mark the start of last year’s conflict that ended with Baku regaining swaths of territory occupied by Armenia for nearly three decades.

A minute of silence was observed in Azerbaijan at 12 p.m. (0800GMT) for the soldiers killed in the battle.

“Today, we bow our heads again in memory of our heroic martyrs who died in the second Karabakh war and ask Allah to rest their souls in peace. They will forever remain in our hearts,” the president said.

Aliyev hailed Baku’s “complete victory” over Armenian forces, whom he accused of engaging in “cowardly attacks and bloody crimes” against civilians.

He said Azerbaijan refused to give in after the defeat in the first Karabakh conflict in the late 1980s and early 1990s.

“We regained our strength, mobilized all our forces, strengthened our army, invigorated our economy … and honorably fulfilled our historic mission,” he said.

“We have expelled the enemy from our lands and restored justice and international law. We have restored our national dignity.”

He condemned Armenia for its “heinous acts” against Azerbaijani civilians.

“More than 100 civilians fell victim to Armenian fascism. Our towns and villages were under constant fire. Armenia used banned weapons, white phosphorus bombs and ballistic missiles. But nothing could stop us,” he said.

Aliyev lauded Azerbaijanis for their “tremendous determination, resolve and courage,” emphasizing that the nation stood firm “in the face of death” to support their armed forces.

“The death of innocent people, the destruction of our cities and villages did not break the resolve of the Azerbaijani people,” he asserted.

Aliyev also extended his gratitude to Turkey for putting its weight behind Baku since the very beginning of the war.

“Today, on the Remembrance Day, I would like to express my special gratitude to brotherly Turkey, which supported us the most throughout the 44 days. Brotherly Turkey and the fraternal Turkish people were in solidarity with Azerbaijan since the first hours of the war and showed their support for Azerbaijan,” he said.

The president also hailed the statements made by Turkish leadership and by “dear brother President Recep Tayyip Erdogan,” adding that Turkey gave Azerbaijan a great political support and additional strength.

“We will never forget that,” he said, adding that the 44-day Patriotic War showed the Turkish-Azerbaijani unity to the world again.

Aliyev said he is also grateful to all other countries for their political support.

“Although a year has passed since the war, the entire international community has already acknowledged and accepted our victory. Today, Azerbaijan is the party setting up the agenda in the region, including Azerbaijani-Armenian relations,” he added.

Relations between the former Soviet republics have been tense since 1991, when the Armenian military occupied Nagorno-Karabakh, also known as Upper Karabakh, a territory internationally recognized as part of Azerbaijan, and seven adjacent regions.

During the 44-day conflict, Azerbaijan liberated several cities and some 300 settlements and villages that were occupied by Armenia for almost 30 years.

Prior to this, about 20% of Azerbaijan’s territory was under illegal occupation.

Two months later, the leaders of Russia, Azerbaijan, and Armenia signed a pact to develop economic ties and infrastructure to benefit the entire region. It also included the establishment of a trilateral working group on Karabakh.