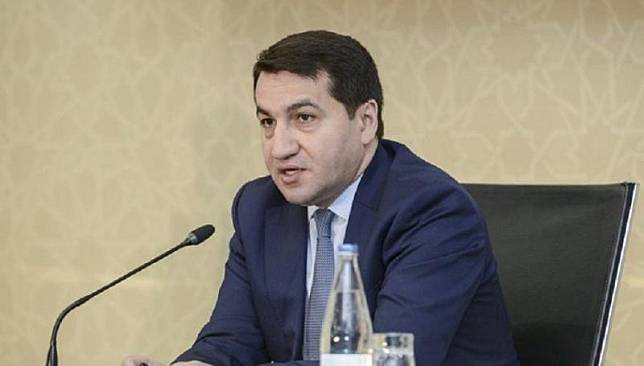 Azerbaijan Gives Time for Armenia to Withdraw Troops from Kalbajar until Nov. 25

Armenia conveyed a request for Azerbaijan through Russia to give time to withdraw troops from the Kalbajar district until November 25, according to ‘Azerbaijan in Focus’ reporting Trend.

Assistant to the President of Azerbaijan, Head of the Foreign Policy Affairs Department of the Presidential Administration Hikmat Hajiyev stressed at a briefing today that Azerbaijan agreed to give time to Armenia.

Hajiyev stressed that the schedule for the withdrawal of Armenian troops from Lachin and Aghdam districts remained unchanged.

Following over a month of military action to liberate its territories from Armenian occupation, Azerbaijan has pushed Armenia to sign the surrender document. A joint statement on the matter was made by Azerbaijani president, Armenia’s PM and the president of Russia.

Armenian Armed Forces launched a large-scale military attack on positions of Azerbaijani army on the front line, using large-caliber weapons, mortars and artillery on Sept. 27. Azerbaijan responded with a counter-offensive along the entire front.

The conflict between the two South Caucasus countries began in 1988 when Armenia made territorial claims against Azerbaijan. As a result of the ensuing war, Armenian Armed Forces occupied 20 percent of Azerbaijan, including the Nagorno-Karabakh region and seven surrounding districts. The 1994 ceasefire agreement was followed by peace negotiations.