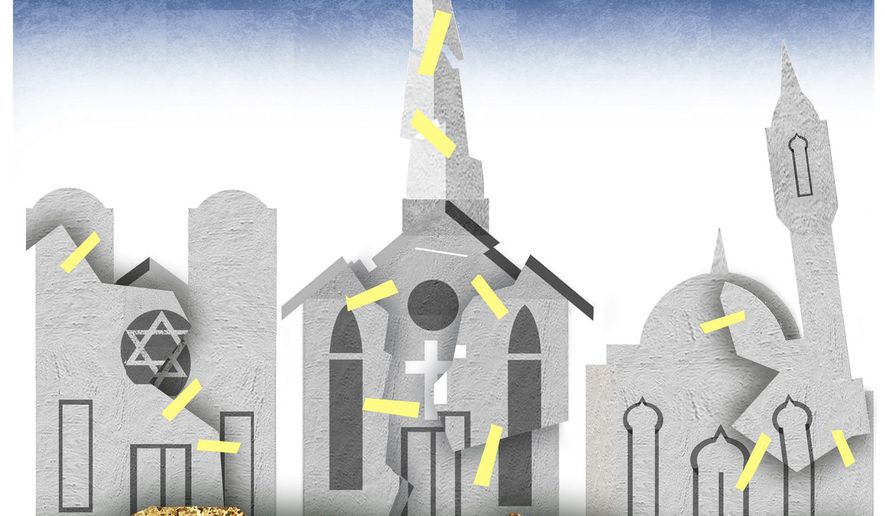 This week, following a six-week war, the last Armenian forces of a three-decade occupation have, under international supervision returned to their own country.

This should be a time for reconciliation, healing and respectful reconstruction. Yet instead, the international media rumbles with accusations that Azerbaijan now plans “cultural genocide” against Christian monuments and heritage.

The “evidence” for these claims — such as it exists — comes from Soviet times, when Azerbaijan was no more a free or independent state than any other part of the USSR. From Stalin’s dynamiting of Orthodox Churches in Moscow to the demolition of Aleksandr NevskyCathedral in Azerbaijan’s capital Bakuto the destruction of more than 25,000 mosques between 1917 and the 1970s — all across the Soviet world the wilful destruction of religious monuments was state policy.

The opposite is the policy of modern-day Azerbaijan. Since independence in 1991, Azerbaijan has shown the world its commitment to restoration of our multi-faith heritage. Baku’s Armenian cathedral, damaged in the chaos of 1990, has been fully restored, now housing a library of some 5,000 precious Armenian manuscripts.

The head of the Armenian Church has been a welcome visitor to the cathedral. A new, Catholic cathedral has been constructed on land donated by the government, and opened by the pope. Old synagogues have been restored and re-opened, and new Jewish schools have been built.

Beyond our borders Azerbaijan has funded and contributed to religious restoration projects ranging from the catacombs of the Vatican, through Romanesque churches in France, to the stained glass of Strasbourg Cathedral. This is why the world can and must trust the leadership of my country: Our actions are proof of our words.

The administration in which I serve has publicly announced it will restore and rebuild both the Christian and Muslim heritage of this ravaged region — and we now welcome the announcement of UNESCO’s involvement in this project. This international partnership, rightly, shows Azerbaijan’s commitment to the difficult path of rebuilding not only the heritage, but the mixed and peaceful society which the region once enjoyed.

Sadly, we have found too little of that still in existence in the territories we have liberated in the last month.

We knew of the destruction that awaited us for some time, as did many of the 700,000 Azerbaijani’s evicted from these lands in the war of the early 1990s. They have been poring over Google maps since its creation, looking for evidence of what remained of their homes, places of work and worship — with little to find.

Tragically we can now see with our own eyes the tally of destruction wrought by 30 years of illegal occupation. The well-documented desecration of a mosque converted for use as a cowshed was just the start: 700 historic and cultural monuments damaged or destroyed; 927 libraries; 808 cultural centres; 85 music and art schools; 22 museums with over 100,000 artefacts; 4 art galleries, 4 theatres, 2 concert halls.

The profligacy of this waste is staggering — and continues still: last month the BBC screened footage of the burning of homes by those departing under the terms of the peace agreement “so no Azerbaijanis can move in.”

Some might argue that this egregious cultural violence provides sufficient justification for a more robust response. But it does not. We have had enough of destruction. We must move on.

And we believe Azerbaijan’s sensitivity to different cultures and religions — nurtured since independence– is the model to follow. Today we share a country where many thousands of Jews, and Christians of many denominations, live together, openly practicing their faiths and celebrating their cultures alongside their Muslim neighbors.

When Pope Francis visited Baku in 2016, at a meeting of Muslim, Jewish and Christian leaders, he remarked on “the harmony which religions can build together, based on personal relations and on the good will of those responsible”.

The goodwill shared between the communities of Abrahamic religions in Azerbaijan can be seen no more powerfully than through a joint article by our country’s Chief Rabbi, Orthodox Archbishop, and the Sheikh-ul-Islam, the country’s Muslim leader appealing to the world to appreciate Azerbaijan for the multi-faith nations that it is today.

We cannot stop accusations being made that Azerbaijan is a threat to Christian heritage. But why would that be true for the territories newly liberated from 30 years of illegal occupation, when we have nurtured multiple faiths and respectfully restored religious buildings to their former glory in the rest of Azerbaijan over the same 30 years?

Hikmet Hajiyev is foreign policy assistant to the president of Azerbaijan.

The original source appeared in The Washington Times on 7 December 2020.