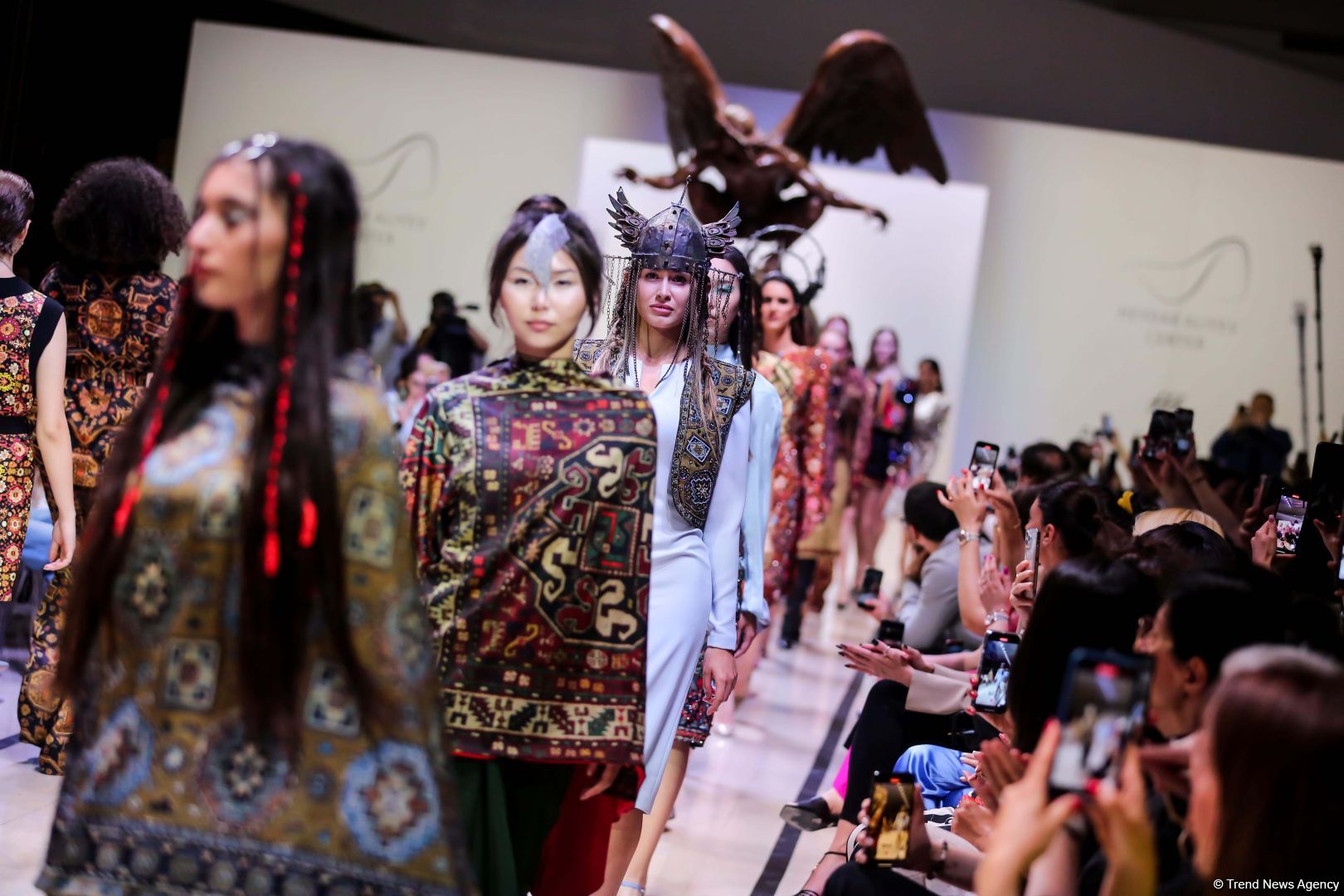 A presentation of new carpets and “AFFFAIR in Carpets” Fashion Show of dresses by famous Azerbaijani designer Rufat Ismayil, made on the basis of Azerbaijani carpet motifs, were held at the Heydar Aliyev Center in Baku with the support of the Heydar Aliyev Foundation, according to Azerbaijan in Focus, reporting Trend News.

In Azerbaijan, the oldest carpet-making center in the world, this type of art has been conveyed from one generation to another for long centuries, keeping it to the present day. Carpet motifs have always given impetus to new ideas and works. Supporting the preservation and development of the carpet school in Azerbaijan, as well as its promotion around the world, the Heydar Aliyev Foundation has implemented a number of projects and organized exhibitions both in Azerbaijan and abroad. Entered on UNESCO’s Representative List of Intangible Cultural Heritage of Humanity, Azerbaijan’s traditional carpet-making art again draws attention to new projects.

On June 3, a real celebration of the harmony of ancient carpet art and modern fashion was held. The colorful and bright fashion show aroused great interest among its guests, who applauded the new significant project in the development and promotion of the national and cultural heritage.

New carpets made by the creative team of “Azerkhalcha” OJSC are based on the designs prepared by the founder of the “AFFFAIR” brand Rufat Ismayil, deriving inspiration from ancient carpet ornaments – elements of the carpets “Folding-unfolding”, “Garabagh”, “Nakhchivan”, “Hunting”, “Pazyryk” were demonstrated to the guests.

The “Sumakh” collection was created by fashion designer Rufat Ismayil – who took inspiration from motifs, rich colors and patterns of Azerbaijani carpets, enjoying the support of the Heydar Aliyev Foundation – devoted to Azerbaijan’s Victory [liberation of its lands from Armenian occupation in the 2020 Second Karabakh War] also drew big attention.

“Azerbaijani carpet weaving has a long history, being a classic art. Each type of art, including carpet art, is on the path of development and search for new ideas realized in collaboration with designers and conceptual artists,” the Board Chairman of Azerkhalcha OJSC Emin Mammadov. “Thanks to this, we are implementing new projects to preserve and “Azerkhalcha” works presented here, created on the basis of five well-known carpet motifs, were released in a limited number of 25 copies. In the new project, we created harmony and synthesis of ancient traditions and modern trends.”

In recent years, Rufat Ismayil has been living and working in Turkey, where he founded the AFFFAIR fashion brand in 2014. Fans of Ismail’s fashion art are such world stars as Beyoncé, Jennifer Lopez, Avril Lavigne, Ashanti, Meg Donnelly, Jacqueline Fernandez, Carrie Underwood and others. The designer’s collections were successfully demonstrated in Italy, France, the US, Iran, Turkey, the UAE and other countries.

Elements of the “Achma-yumma” carpet are remarkable among Karabakh carpets for their artistic features, being a part of the set of patterns related to this series of carpets.

Elements of another artwork, remarkable for its beauty, originate from the “Karabakh” carpet. Seeming to be comprised of repeated elements from the first sight, this composition scatters about a myriad of stars.

The artwork called “Nakhchivan” was created from various elements of a carpet, an example of the “Karabakh” carpet school, and a new composition by using also patterns of the carpets “Khatai” and “Chelebi”.

The artist, taking inspiration from the beauty of the elements related to “Ovchuluq” carpets of Karabakh, uses elements of the “Band-Rumi” composition, which has been widely applied in Azerbaijani and the Near East art schools, has created an artistic composition with a lattice content.

The artwork called “Pazyryk” took its source from the carpet of the same name related to the Turkic ancestry and is considered the oldest carpet in the world (dating back to 2,500 years), preserved at the State Hermitage Museum in Russian Saint Petersburg.

The aim of the project [holding the above presentation and fashion show], developed by deriving inspiration from Azerbaijani carpets, especially, from the Karabakh carpet school, is to preserve historic traditions in contemporary ways.