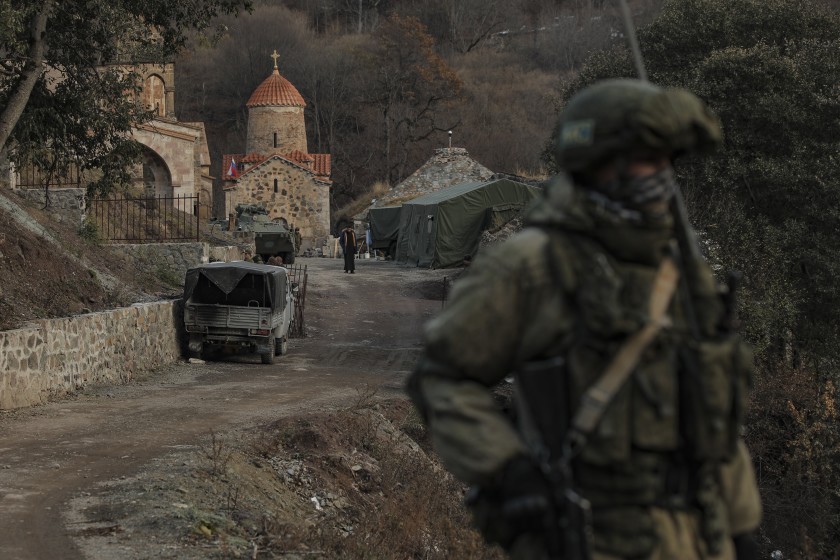 A Russian peacekeeper at a medieval monastery near Kalbajar, Azerbaijan, on Wednesday.(Emrah Gurel / Associated Press)

Azerbaijan Prepares For the Post-Karabakh Era

Winning a war is a major achievement, but consolidating the peace is even more painstaking. There is promising progress in Azerbaijan after the liberation of its territories from the Armenian occupation.

Trilateral Moscow summit of 11 January between Russia, Azerbaijan and Armenia was definitely a very concrete step in the right direction. As people will reap the advantages of peace and improved infrastructure, they may become more supportive of these efforts. It was a pity that the potentials of this region were neglected for decades.

The mutual mistrust between Turkey and Armenia prevented a genuine cooperation between them. When a pipeline was going to be constructed to carry the Azerbaijani oil to the Turkish Mediterranean harbour of Ceyhan, the shortest and most convenient route was of course through Armenia. However, because of the mistrust, Ankara and Baku decided to go through Tbilisi, thus circumventing Armenia.

The same scenario was repeated when a railroad was going to be constructed between Azerbaijan’s capital Baku and the eastern Turkish city of Kars. The shortest route for such a railroad was again to go from Kars to Gyumri and from there to Yerevan and Baku. Actually, there is an existing railroad, constructed in 1899, that links Kars to Gyumri and Baku. It was used until as late as 1993. Turkey and Azerbaijan, again because of their mistrust about Armenia, decided not to use the existing railroad. Instead they decided to construct a new railroad going through Tbilisi. The loss, again, was on Armenia’s part.

And now, Armenia has a new chance. It may draw economic advantage by facilitating the construction of a railroad between Nakhchivan and Azerbaijan, which will go through Meghri corridor. Unfortunately, the strong Armenian diaspora has already started to oppose this project. It is yet to be observed whether the Armenian government will listen to the ill-advised suggestions of the diaspora or focus on the dire needs of its people.

The decisions adopted in the ceasefire agreement are being translated into action one after the other. A joint Turkish-Russian observation centre is set up in Aghdam to monitor the implementation of the ceasefire. A detachment of around forty Turkish soldiers under the command of a Turkish brigadier are cooperating with the Russian soldiers in the centre. They will record the violations and follow up the complaints of both parties.

We have to keep in mind that this is only a ceasefire. There are still settlements under the Armenian occupation that have to be liberated and a bigger task is to determine the final status of Karabakh. This process will also be a test for Turkish-Russian cooperation.

The meeting of Deputy Prime Ministers of three countries –Azerbaijan, Russia and Armenia- that was agreed in the trilateral Moscow summit – was held on 31 January and it was decided to set up experts’ groups on 2nd February. These expert groups will hold their first meetings before 5 February. This tight schedule would not be possible without Russia’s strong support.

Iran’s efforts are laudable endeavours, but Georgia has already informed Iran of its reluctance to join such a grouping. Tbilisi has reasons for it, because of Russia’s recognition of two of its autonomous regions – Abkhazia and South Ossetia – as independent states. However, every effort has to be made to bring Georgia in. The region will be more stable if none of the three countries is left out.

Another country that is eager to assume a role in the Caucasus is France. It was one of the co-chairs of the Minsk Group of the Organisation of the Security and Cooperation in Europe (OSCE) that was in charge of putting an end to the Armenian occupation of Karabakh. It could play a positive role by making genuine efforts to implement the UN Security Council resolutions that were calling for the immediate withdrawal of the Armenian forces from Karabakh. Instead, it dragged its feet to keep Karabakh under the Armenian occupation.

France did not stop there. After the liberation of Karabakh, the French Senate on 26 November adopted a motion calling for the recognition of the Nagorno Karabakh as an independent State. The lower house in the French parliament – the National Assembly – on 3 December followed suit and adopted a similar motion.

France will admit that such a move is not much different from the Azerbaijani parliament’s calling for the Corsican province of France to become an independent State.

French State Secretary for Foreign Affairs last week has visited Baku for a charm offensive to whitewash the negative effects of both its co-chairmanship of the Minsk Group and the resolution adopted in the French parliament. He told the journalists: “Of course, some misunderstandings have happened. However, it is important for the two friendly countries to talk to solve this between them”. He had the difficult task of making the Azerbaijani government forget both the French government’s attitude and that of the French parliament.

France will need a lot of efforts to regain Azerbaijan’s lost trust.