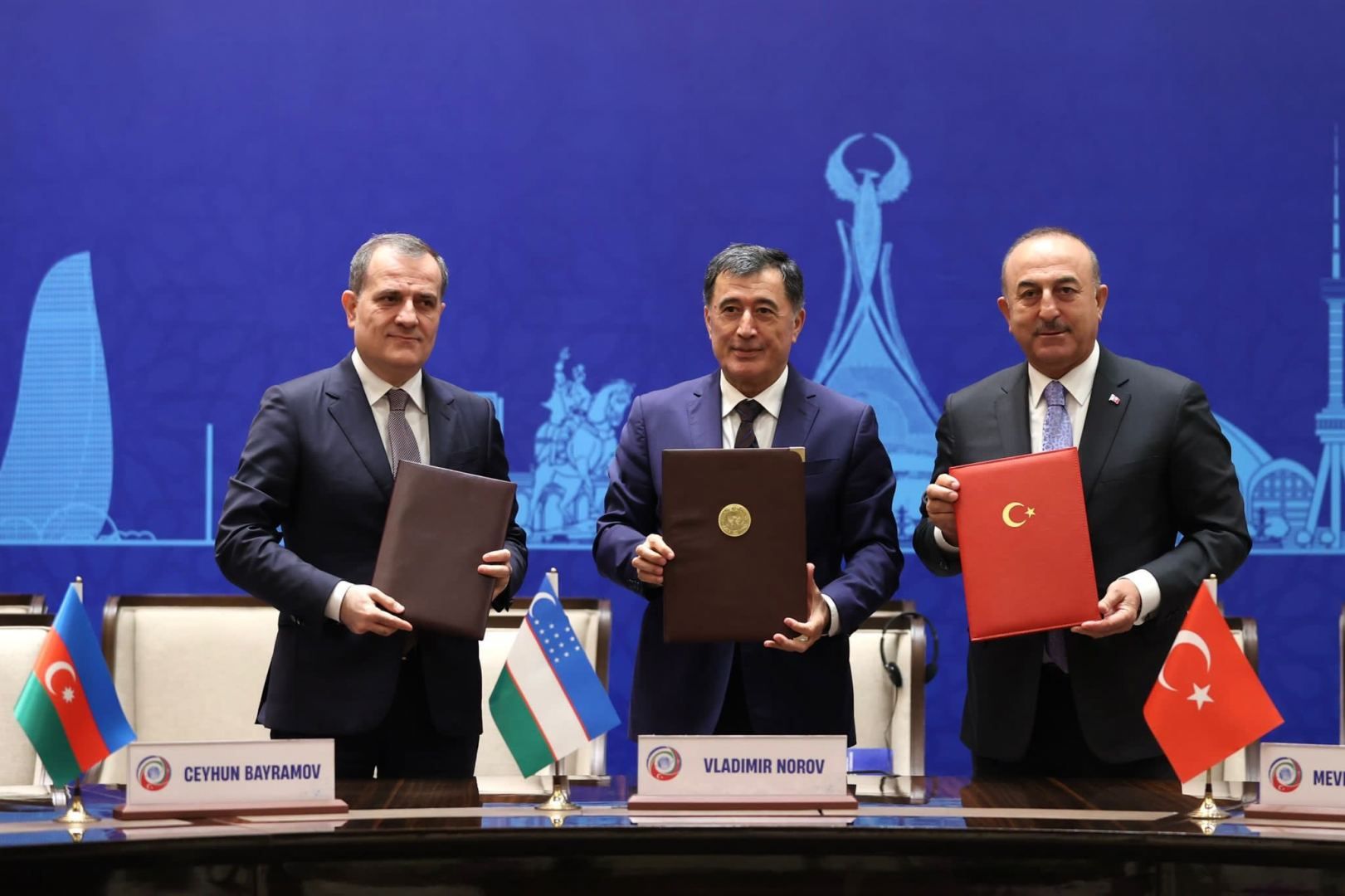 Azerbaijan, Türkiye, and Uzbekistan have signed the Tashkent Declaration, Minister of Foreign Affairs of Türkiye Mevlut Cavushoglu said on Twitter, according to Azerbaijan in Focus, reporting Azernews.

The declaration on the results of the trilateral Uzbekistan–Azerbaijan–Türkiye Dialogue was signed by Turkish and Azerbaijani Foreign Ministers Mevlüt Çavuşoğlu and Jeyhun Bayramov as well as Acting Uzbek Foreign Minister Vladimir Norov.

“Signed the Tashkent Declaration which will increase the welfare of the Turkic world and strengthen our relations. We will make this mechanism permanent and realize concrete projects,” Cavushoglu noted.

Speaking at the conference, the Uzbek official stated that the Declaration defines the major priorities for the near future.

According to him, the meeting has confirmed the importance of working together and focusing on achieving practical results to ensure the sustainable development of the three countries.

“As an outcome, we have signed an important document – the Tashkent Declaration, which defines the main priorities for the near future. Our subsequent meetings in this format shall be more fruitful and contribute to the even greater rapprochement between our friendly countries,” Norov stated.

In turn, the Azerbaijani economy minister tweeted that the first meeting of the ministers facilitated fruitful discussions on strengthening cooperation between the three friendly and brotherly countries, promoting joint investment projects, and utilizing transport and logistics opportunities.

“The Tashkent Declaration, signed within the first trilateral meeting between the Foreign, Economy, and Transport Ministers of Azerbaijan, Türkiye, and Uzbekistan, is a significant contribution to the further deepening and enhancement of partnership and friendly ties between our countries,” the minister wrote.

Azerbaijan, Uzbekistan, and Türkiye have underlined the importance of the opening of the Zangazur corridor.

According to the document, the sides emphasized the importance of contributing to Azerbaijan’s post-conflict rehabilitation, reconstruction and reintegration efforts by investing in the Karabakh and Eastern Zangazur regions of Azerbaijan.

In turn, Azerbaijan expressed high appreciation for the participation of the companies of Türkiye and Uzbekistan in infrastructure projects for the restoration and reconstruction of the liberated territories of Azerbaijan.

Furthermore, the parties underlined the importance of the opening of the Zangazur corridor connecting the Eastern Zangazur and the Nakhchivan Autonomous Republic of Azerbaijan for the expansion of international transport links.

Norov noted Uzbekistan’s interest in seeing the Zangazur corridor restored, which could provide the shortest land route from Asia to Europe.

According to him, the desire of three countries for developing interregional transport corridors has special relevance.

“The use of the transit potential of the Baku-Tbilisi-Kars railway is of great importance for Uzbekistan. Today we are actively working on developing a basis for the China-Kyrgyzstan-Uzbekistan railway project. At the summit of the Shanghai Cooperation Organization, heads of state in Samarkand on September 15-16 this year, it is planned to sign a corresponding trilateral document,” Norov informed.

He believes that the connection of the China-Kyrgyzstan-Uzbekistan railway with the Transcaucasus corridor will create a unified transport network between the three countries and expand the geography of the trade from China to Europe.

“This is why Uzbekistan is interested in having the Zangazur corridor restored, as this could provide the shortest land route from Asia to Europe,” Norov said.

During the meeting, Uzbekistan initiated the creation of a new transport corridor with the participation of Azerbaijan.

Speaking at the first meeting, the Minister of Transport of Uzbekistan Ilhom Mahkamov initiated the formation of a new multimodal Türkiye-Caucasus-Central Asia-South Asia corridor through Afghanistan.

“Currently, there is an opportunity to transport goods through the territory of Afghanistan to Pakistan. Thus, our carriers are gradually testing and are already starting to carry out cargo transportation by road through Afghanistan,” Mahkamov said.

Further, the sides agreed to actively use the Baku–Tbilisi–Akhalkalaki–Kars railway (BTAK).

According to the Uzbek official, the three countries are ready to make joint efforts for reaching the full potential of cooperation in the fields of economy, trade, investment, and transport, including all types of transport and transit communication.

“In this regard, the countries eye making active use of all the possibilities of the Baku–Tbilisi–Akhalkalaki–Kars railway, Turkish and Azerbaijani international ports, as well as the North-South and East-West transport corridors,” he noted.

Then, the minister stressed that the sides emphasized the importance of Uzbekistan’s initiative to build a Termez–Mazar-i-Sharif–Kabul–Peshawar strategic railway line and expressed support for the construction of the Uzbekistan–Kyrgyzstan–China railway.

Similarly, Bayramov stated that Karabakh’s revival will contribute to the development of transport links in the region.

According to him, Azerbaijan, Türkiye, and Uzbekistan held successful negotiations on possibilities and future development of transport relations.

“The countries should make every effort to develop regional communication through actively using the Baku–Tbilisi–Akhalkalaki–Kars railway and the Middle Corridor transport routes,” Bayramov said.

“Azerbaijan situated at the crossroads of civilizations, subsequently supports and promotes regional cooperation platforms. For example, the Azerbaijan–Türkiye–Kazakhstan trilateral meeting, held in Baku on June 27, can serve as a model of regional dialogue,” Bayramov stated.

According to the minister, Azerbaijan, Türkiye, and Uzbekistan will also strive to promote joint economic projects.

“Joint efforts for reaching the potential on energy, particularly on the renewable energy, as well as trade and transport, will contribute to the prosperity of our countries,” said Bayramov.

As the minister emphasized, the new trilateral platform fits well with existing efforts aimed at developing regional interaction and meeting the common peaceful interests of Azerbaijan, Türkiye, and Uzbekistan amidst growing challenges to global security, stability, and economic development.

Speaking on the matter, Norov noted that the three countries must form economic corridors.

“Our countries as hubs in their regions should not be limited only to the function of ‘transit points’, but must form economic corridors by creating along existing transport routes of industrial cooperation, logistics, and sales outlets,” he said.

In his words, this will make it possible together to produce and supply high-value-added products to foreign markets.

Moreover, he emphasized that the trade between Uzbekistan and Azerbaijan has increased almost sevenfold in the past five years alone, and with Türkiye – two and a half times.

He noted that this positive trend will certainly continue this year.

“However, the achieved high dynamics of economic cooperation with Azerbaijan and Türkiye still does not fully meet the existing potential for interaction. Today, there are all conditions for fuller use of existing reserves in a mutually beneficial partnership,” he said.

Talking about the post-war period, Bayramov emphasized that Azerbaijan holds a consistent position on the normalization talks with Armenia.

“Azerbaijan offered Armenia normalizing relations on the basis of the principles of international law. This is the key to security, stability, and prosperity in the South Caucasus,” Bayramov said.

Similarly, the Turkish foreign minister noted that Türkiye wants normalization of relations between Azerbaijan and Armenia.

According to him, opening communication in the South Caucasus will bring benefits to the regional countries in the near future.

“The current global crisis paves the way not only for risks but also for new opportunities. Therefore, expanding trilateral ties is of particular significance. Türkiye strives to expand trade ties with Azerbaijan and Uzbekistan,” Cavusoglu noted.