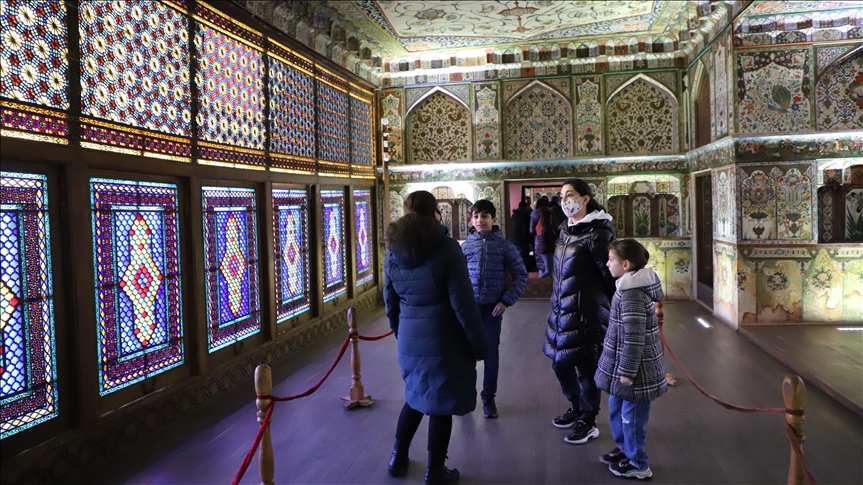 A historic palace in an Azerbaijani city, which is famous for its historical and natural scenes, is one of the most visited places by tourists during the spring festival of Nowruz.

The Khan’s Palace in Sheki city is among the significant works of Azerbaijani medieval architecture and was included in the UNESCO World Cultural Heritage List in 2019.

The palace, where nature is intertwined with history, fascinates its visitors.

It is surrounded by walls backed by mountains that are covered with forests. The palace was built as a summer residence in 1762 by Muhammad Husayn Khan Mushtaq, grandson of Haji Chalabi Khan — the founder of the Sheki Khanate.

The two-storey building has six rooms and two mirrored balconies, and the room’s inner walls are decorated with colorful embroidery, motifs and murals reflecting war scenes.

Geometric patterns adorn palace windows which were made by mounting glass of various colors between wooden slats, and are among the rarest examples of handicrafts called shabaka.

Each square meter of the shabaka in the windows consists of 5,000 interlocking slats and pieces of glass. Their beauty is supported by depictions of war and hunting on the walls.

One of the outstanding features of the palace is that no nails or adhesive material were used in its construction.

There is a pool in the garden of the palace, which is called Garden of Khan, and two ancient plane trees accompany it on both sides.

One of the trees is 34 meters (over 111 feet) high and the other 42 meters (over 137 feet) high, and they are older than the palace itself as they were erected in 1530. They are called Plane of Khan by the public.

The favorite place of local tourists who take the opportunity of the nine-day Nowruz holiday in the country is the city of Sheki.

The Khan’s Palace is also flooded by tourists from Baku and other provinces.

Behruz Halikov, one of the tourists visiting the palace, told Anadolu Agency that Azerbaijan has many historical and cultural monuments and Sheki is one of the richest regions in this regard.

“I wanted my children to feel our history and look after it in the future,” he said, visiting the site with his children.

“This is my second time here. Even though it is a small building, it is very interesting and fascinating,” he said, recommending people to visit the palace.

Also visiting the palace, Yalcin Halilov said: “The palace is a very significant monument for us. I visited here with my family to learn and remember our history.”

Ali Samedov from Baku said he is visiting the palace for the first time and added: “I heard about it so many times. I felt myself like in history in the Khan’s Palace.

Samedov said he is proud to have such a historical monument.