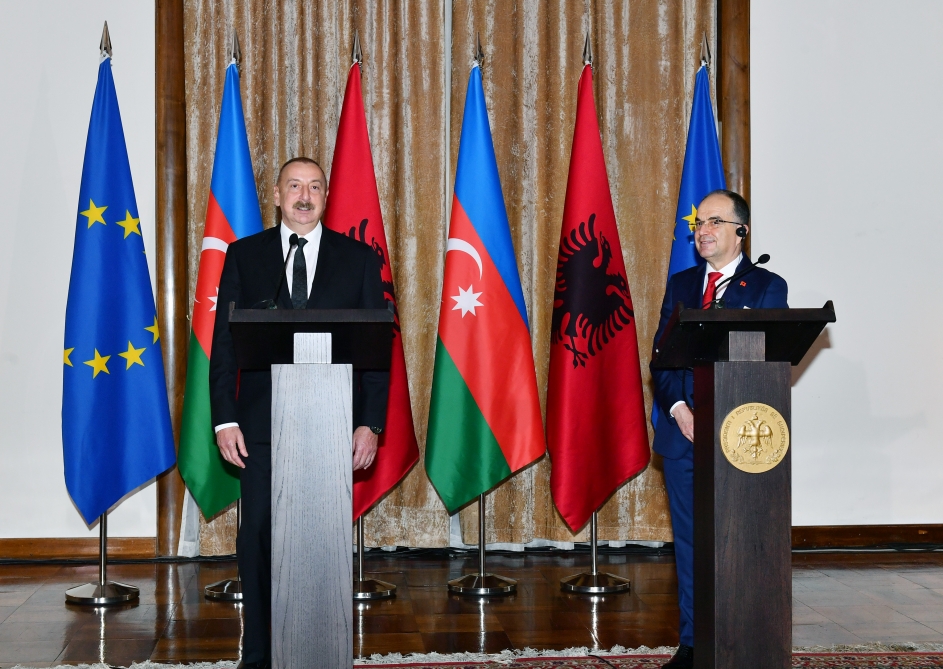 The President of Albania made the statement first.

It is with great pleasure that I am welcoming the President of Azerbaijan, Mr. Ilham Aliyev, here in Tirana today.

Mr. President, I want to thank you for accepting our invitation and for your fruitful cooperation with us. This is the first important state visit in the history of our relations. The President of Azerbaijan is visiting our country. Such a high-level visit is a manifestation of our mutual determination to develop our relations and expand cooperation between our peoples.

I am deeply grateful to you for the dialogue between our countries. Mr. President, it is very good that you are visiting our country today. In fact, it opens up new areas of mutual interest. Regarding the celebration of the 30th anniversary of the establishment of diplomatic relations between Albania and Azerbaijan, we will enter a busy stage of our cooperation in 2023. We intend to organize the Azerbaijan Week here. In fact, this event is important for the cultural promotion of your country here as well. We are also grateful to the Azerbaijani side for expressing its interest in opening the embassy of your country here, and this step is a good manifestation of cooperation between our countries.

Today’s discussions are particularly important because we are defining new directions for the future and identifying areas of interest to us. We would like to note that the meeting of the Joint Committee can further strengthen our relations. In particular, Albania is very interested in expanding cooperation in the fields of energy, infrastructure, tourism, agriculture and industry. Of course, in the field of energy, the Ion-Adriatic pipeline connects Albania, Montenegro and Croatia, increases the geopolitical importance of our countries and demonstrates the diversification of gas supply at the regional level, including European. We know that your country has experience in investing in this field. Albania is also very open and ready to use transit facilities on its territory. We consider it possible to fully use our gas infrastructure for this purpose. We sincerely wish for greater results in this area. We are opening new avenues for our cooperation and welcoming the efforts of the Azerbaijani side to this end. We believe that by working together, we will be able to mobilize and expand our capabilities.

Actually tourism is another important sector for our countries’ economies. Azerbaijan demonstrates a successful experience. We can take advantage of that. I have told Mr. President that we would highly value investments made by Azerbaijan in this field. At the same time, we should work together in the field of culture so that our peoples get closer and get to know each other. In this regard, new agreements can be signed between our two countries. We know that thousands of cultural and artistic exhibits can be displayed. Mr. President, I have also told you that this will contribute to the preservation of our heritage. We highly appreciate the help provided during the 2019 earthquake.

We would like to state that when it comes to the war in Ukraine and its consequences, we share a common position: diplomacy and dialogue are the main way forward. It is also important for the South Caucasus and other regions. Albania has always supported Azerbaijan’s territorial integrity and supported the implementation of UN Security Council resolutions. Regarding the war in Ukraine, I declare that we support the territorial integrity of Ukraine and want this issue to be resolved peacefully, based on the norms of international law. I have also stated that there is productive cooperation between our countries in international organizations, the UN and the Council of Europe. I have appealed to the UN Security Council to support Albania’s candidacy, including the OSCE chairmanship. Of course, as far as our candidacy is concerned, our cooperation should be continued in the future.

Regarding other matters, I have told Mr. President that Kosovo is very important for Albania. It is important not only for stability but also for the progress of the entire region. As for inter-parliamentary cooperation, there are friendship groups between Albania and Azerbaijan. There may be many steps taken in this direction. We would like our parliaments to cooperate closely with each other.

In conclusion, I would like to state that, as far as our bilateral relations are concerned, we have a long way to go and many results to achieve. Therefore, I wish a very good future for our friendly relations and the relations between our countries.

Then the President of Azerbaijan made the statement.

Mr. President, first of all, I would like to thank you for the invitation and for the hospitality.

I am visiting your beautiful country for the first time and I am very happy to be here. I am sure that this visit will give a strong impetus to the development of Albanian-Azerbaijani relations. We discussed many issues in a one-on-one meeting today and expressed our confidence that there were great opportunities for future close cooperation.

As for the political dialogue, Albanian presidents visited Azerbaijan many times in previous years. This year, former President Meta was on a visit to Azerbaijan. At the same time, Prime Minister Edi Rama was our guest in April this year. My visit today shows that there are many remarkable manifestations of a political dialogue and there is a very strong dynamism. In other words, these close political contacts, of course, show our intention, our interest in each other and, at the same time, enable us to discuss very important issues.

Our successful cooperation in international organizations also strengthens our relations. You mentioned that Albania had always supported the territorial integrity of Azerbaijan and this support has always been mutual. We highly appreciate it. We highly appreciate the statements of Albanian officials both during the occupation and during the Second Karabakh War, and the support for the territorial integrity of Azerbaijan.

As a result of the Second Karabakh War, we have liberated our ancient lands from the invaders and restored international law and justice. You mentioned the resolutions of the UN Security Council. I should mention that these resolutions were adopted in 1993. However, these resolutions were not implemented for 27 years. Armenia was not interested in the implementation of these resolutions, explicitly ignored them, while the international community simply turned a blind eye to it. No sanctions were imposed on Armenia even though Azerbaijan has repeatedly raised the issue of applying sanctions against Armenia and punishing Armenia. Because the occupation of 20 percent of the territory of Azerbaijan is a major crime, illegal settlement in the occupied lands is a war crime. The devastation caused there actually made those lands completely lifeless. I informed you that Armenians had destroyed 65 out of 67 mosques during the occupation, kept animals – cows and pigs – in the remaining two mosques and insulted the feelings of all Muslims.

We have resolved this issue on our own, restored justice, and now the Azerbaijani flag is flying on liberated lands. We have returned to these lands, life is returning to these lands. Of course, your country’s support for us in the issue that is vital for our people and our state is very important for us, and I would like to thank you once again for that.

I agree with you that the joint working group on economy and industry should hold its first meeting soon. Because there are many issues to be discussed. Today, we talked about cooperation in the gas sector. We exchanged ideas about both the achievements already made and work to be done. However, there are very good opportunities for cooperation besides the energy sector – mutual investment, joint activity of Albanian and Azerbaijani companies, creation of joint enterprises, tourism, agriculture, modern technologies. I know that all these areas are a priority for your country and for us. Therefore, I am sure that we will confidently step forward in these directions.

As for the issue of gas supplies, Azerbaijan and Albania are members of the TAP project, and our countries have played a very important role in the implementation of the Southern Gas Corridor. Representatives of Albania have always actively participated in the numerous meetings of the Southern Gas Corridor Advisory Council held under the chairmanship of Azerbaijan and the European Union. Today, Azerbaijani gas contributes to European energy security. In July this year, a Memorandum of Understanding on strategic cooperation in the field of energy was signed between Azerbaijan and the European Commission. Based on that Memorandum, we intend to double our gas supplies to Europe by 2027. Of course, that gas will pass through the territory of Albania, thus providing additional support and contribution to Europe’s energy security.

Our gas reserves are very rich. Currently, the issue of doubling the capacity of both TAP and TANAP gas pipelines is being discussed. So this project – the Southern Gas Corridor – has been in operation for almost two years, but the expansion of these two pipelines, which are already an integral part of the Southern Gas Corridor, is being discussed. Therefore, it shows that there is a great need and demand for it. Azerbaijan is already recognized and valued as a reliable partner by European Union officials. Of course, we also understand this responsibility quite well.

At the same time, we have also talked about the contribution we can make to the development of the gas industry in Albania. We have some ideas regarding this issue. A gas network has not been established in Albania yet. Azerbaijan can participate in that as an investor, we are ready for it. Today we will discuss this issue and other issues related to the field of energy.

I want to touch upon one more issue. Azerbaijan has a platform of close cooperation with NATO. We have actively participated in NATO operations in Afghanistan for many years. We were among the first non-NATO countries to join the peacekeeping mission. We were among the last two countries to leave Afghanistan – the last two countries were Turkiye and Azerbaijan. All other NATO members left before us. So I want to say that this is also a manifestation of our responsibility. Albania as a member of NATO has always given great support for NATO-Azerbaijan relations. This is why I am grateful to you.

At the end of my speech, in front of the media, I want to invite you to an official visit to Azerbaijan. Thank you again for the invitation and hospitality. Thank you.