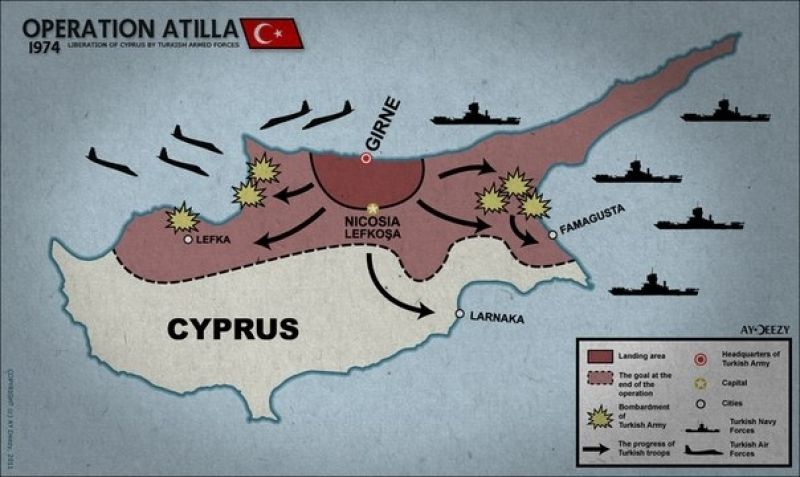 The parliamentary delegation of Azerbaijan will take part in the Turkish Republic of Northern Cyprus (TRNC) in commemoration of the 47th anniversary of the landing of Turkish troops in Cyprus in order to ensure the safety of Turkish Cypriots, according to Azerbaijan in Focus, reporting Turan News.

“The 47th year of the Cyprus peacekeeping operation and July 20, the Day of Peace and Freedom will be held in ceremonies together with our President, you will be there. We are very grateful to you for this. This is a very important message to the world. This is perhaps the greatest manifestation of friendship and brotherhood between Turkey and Azerbaijan, and awareness of the decisive slogan “One nation, two states”, the chairman of the Foreign Affairs Committee, MP from the Justice Party Akif Chagatay Kilic addressed the chairman of the Committee on Foreign Affairs and Inter-parliamentary Relations of the Azerbaijani Parliament Samed Seyidov on July 14.

The Azerbaijani delegation is in Turkey within the framework of the events on the fifth anniversary of the prevention of a coup d’etat.

Seyidov said that the thoughts of Azerbaijan and Turkey are directed in the same direction. “Today we convey the message of the unity of Turkey and Azerbaijan to the world. As Turkey and Azerbaijan, we must unite the entire Turkic world. Sometime later, after the opening of the Zangezur corridor, we will take a train and arrive in Turkey from Nakhchivan. This is a very important issue,” he said.

He further noted that “both on July 15 and the trilateral meeting of the parliamentary commissions on foreign affairs of Azerbaijan, Turkey and the TRNC and our stay in the TRNC from July 19 to 21 will demonstrate to the world the strength and unity of the Turkic world,” he said.

Among the members of that delegation was Naira Shahtakhinskaya, a deputy of the Milli Majlis of two convocations.

Commenting on the background of this visit, Shahtahtinskaya noted that back in 1999, being the deputy chair of the Milli Majlis Committee on Inter-Parliamentary Relations and International Relations; she officially received the head of the TRNC office in Baku.

In July 2000, a representative delegation of the Milli Majlis with the participation of deputies from the ruling and opposition parties, as well as independent parliamentarians, went to the TRNC.

The delegation met with TRNC officials, and it was received by then-President Rauf Denktash.

“The delegation of the Milli Majlis visited the TRNC. It took place in complex historical, international and political conditions when the Azerbaijani state was not yet fully strengthened. The current visit of the parliamentary delegation of Azerbaijan is also of historical importance as it takes place in the new geopolitical reality in the region, which emerged after Azerbaijan’s victory in the Karabakh war and the official registration of the Shusha declaration of allied relations between the two fraternal countries – Azerbaijan and Turkey,” Shahtahtinskaya stressed.

Greece, however, fears the start of the TRNC recognition procedure. The Greek edition Sigmalive regarded the forthcoming visit of Azerbaijani parliamentarians as an attempt to legitimise the TRNC.

Earlier, the TRNC was visited by Pakistani diplomats accredited in Ankara. “… the situation has caused panic among the Greek Cypriots and enthusiasm among the Turkish Cypriots,” writes Sigmalive, citing the Turkish newspaper Sabah.

Greek columnist, retired Colonel Panayotis Nastos, analyzing the Shusha Declaration (signed by the presidents of Azerbaijan and Turkey in Shusha on June 15, 2021), noted that it has important implications for Greece.

He concludes that in the event of a military confrontation with Turkey, Greece should also consider Azerbaijan as its potential adversary, first, the Air Force and special forces of this country. “Even if we destroy the most important air facilities – airports inside Turkey with critical ammunition of our air force and navy,” the expert notes, a military danger may emanate from the territory of Azerbaijan.

“The aforementioned issues should be of concern to staff and political leadership before it’s too late,” concludes Nastos.

Attempts by Greek Ambassador Nikolaos Piperigos to stabilise relations between Athens and Baku are being obstructed by Armenian and Greek hawks.

The Russian agency Sputnik posted an open letter from the Armenian National Committee of Greece sent to Foreign Minister Nikos Dendias regarding the participation of the Greek Ambassador to Azerbaijan in the event in “occupied Shusha of Artsakh”.

President of the Republic of Cyprus Nikos Anastasiadis, in connection with Erdogan’s visit to the TRNC, declared vigilance and reaction to the statements of the Turkish President.

In fact, on July 12, High Representative for Foreign Affairs and Security Policy Josep Borrell addressed the issue, expressing EU concerns and expressing the hope that there will be no talk of an emergency Council on foreign affairs in the coming days.

ASTNA believes that most likely Ankara, using the Turkish alliance (Turkey-Azerbaijan-Pakistan), seeks to revive the negotiations on Cyprus, frozen since 2014. And judging by the Greek reaction, Erdogan is succeeding.

The visit of Turkish President Recep Tayyip Erdogan and “three unexpected statements” that he is expected to make have become a priority on the agenda of the Republic of Cyprus, Greece and European countries that are “waiting for them carefully,” Sigmalive reports, citing the Turkish BBC service.

According to the BBC, “three unexpected statements” concern the following: “the possibility of announcing the discovery of natural gas in the territorial waters of Cyprus, the change in the status of the closed territory of Varosia (Maraş) and the creation of a permanent military base on the island in the Lefkonikos area.”

According to wikipedia.org, the Republic of Cyprus was established in 1960 after Cyprus was granted independence from Great Britain. The Greek and Turkish communities were given equal opportunities to participate in the administration of the new state. They were allocated seats in government and civilian institutions of power. The guarantees of the existence of the new state, in accordance with the 1960 Treaty on guarantees, were Great Britain, Greece and Turkey.

In July 1974, with the support of the Greek military junta, a military coup took place on the island: President Macarius (Muscos) was removed from power, and control over the island passed to Nikos Sampson, a representative of the Greek underground organisation EOKA-B (advocating the annexation of Cyprus to Greece – enosis). Taking advantage of the provisions of the 1960 Treaty and under the pretext of restoring constitutional power, Turkish troops invaded Cyprus. In fact, the forceful action led to the partition of the island, and it is already secondary that as a result of this, the Greek military junta fell and Makarius was restored to power. The island of Cyprus was divided into the North, controlled by the Turkish Cypriots, and the South, controlled by the Greek Cypriots.

After 8 years of negotiations with the Republic of Cyprus on the federal structure of the state, in 1983 the Turkish Cypriots announced the creation of the Turkish Republic of Northern Cyprus (TRNC).

In 2004, the Greek Cypriots voted in a referendum against the creation of a bi-communal and bi-zonal state on the island instead of the single Republic of Cyprus in accordance with the plan for a Cyprus settlement proposed by the UN (Annan Plan).

In February 2014, on the territory of the abandoned Nicosia airport, a meeting was held between the President of Cyprus Nikos Anastasiades and the President of the TRNC Dervish Eroglu. In a joint communiqué, the parties stated that they would strive to create a unified Cyprus, which will be as a single state-federal, bi-zonal and bi-communal. However, there was no further breakthrough. UN does not recognise TRNC.