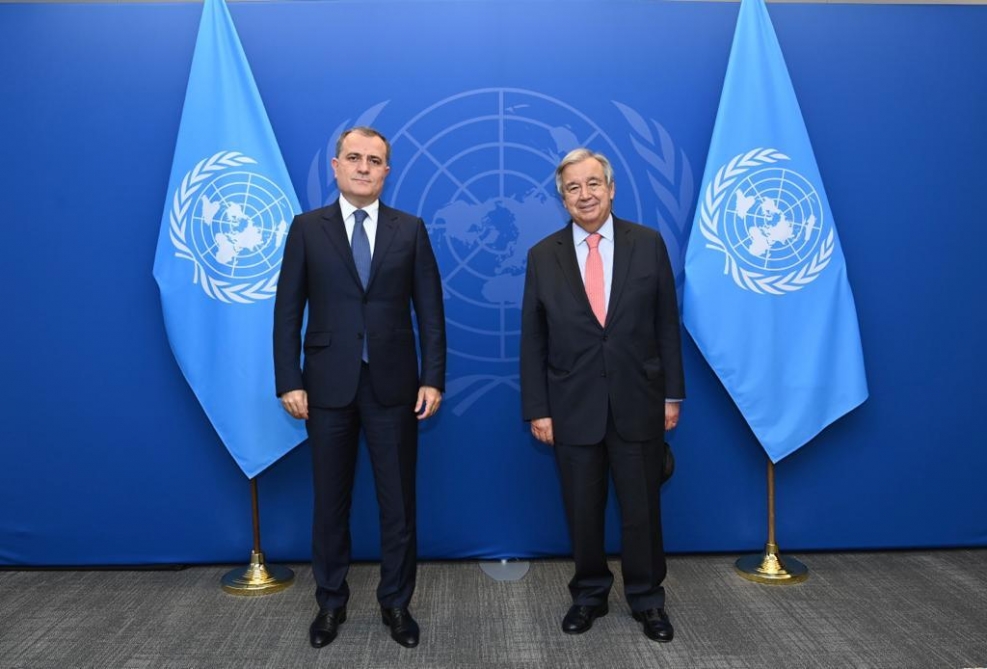 Azerbaijan’s Foreign Minister Jeyhun Bayramov has met with UN Secretary-General António Guterres within the framework of his participation in the high-level week of the 77th session of the UN General Assembly, according to Azerbaijan in Focus reporting AzerTac.

During the meeting, the sides exchanged views on cooperation between Azerbaijan and the UN, future activities, and the latest situation in the region.

Minister Jeyhun Bayramov said that during Azerbaijan’s 30 years of membership in the UN, which was celebrated this year, the relations have developed in an ascending line, and the country has taken large-scale initiatives in a number of directions within the framework of the UN, especially in the field of supporting peace and security. Minister Jeyhun Bayramov noted with satisfaction that the visits of the Chairman of the UN General Assembly and other high-level leadership to Azerbaijan in recent years contributed to the further development of relations.

Azerbaijan’s chairmanship in the Non-Aligned Movement and its initiatives in this context were mentioned. Then, the minister gave detailed information about the large-scale provocations of Armenia and the initiatives of Azerbaijan in the field of peacebuilding. Providing an insight into the restoration and reconstruction works in the liberated territories, and the return of the internally displaced persons to the region, the minister emphasized the importance of increasing international efforts to eliminate the threat of landmines in the territories of Azerbaijan.

Secretary-General António Guterres noted that Azerbaijan has exemplary cooperative relations with the UN and that it is important to deepen cooperation in all directions.

António Guterres expressed his appreciation for the globally important initiatives put forward by Azerbaijan as the chairman of the Non-Aligned Movement. He stressed the importance of the normalization process and reducing the tension between Armenia and Azerbaijan.

At the meeting, the sides also exchanged views on other issues of mutual interest that are on the agenda of the UN.