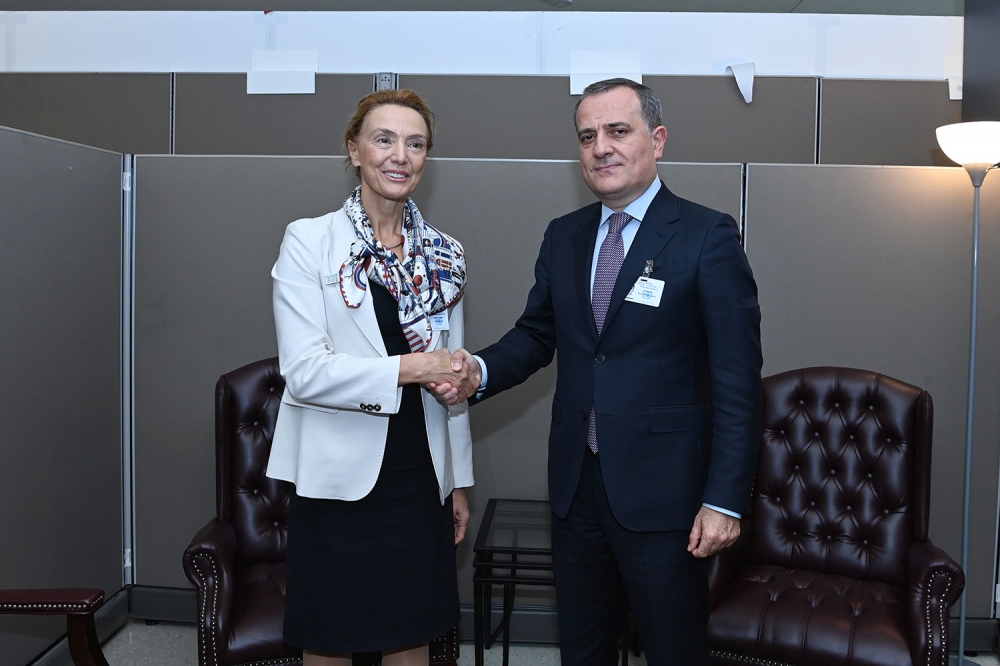 Azerbaijani FM meets with Secretary General of Council of Europe

Azerbaijan’s Minister of Foreign Affairs Jeyhun Bayramov has met with the Secretary General of the Council of Europe (CoE) Marija Pejčinović Burić on the sidelines of the high-level week of the 77th session of the UN General Assembly in New York, according to Azerbaijan in Focus, reporting AzerTac.

The sides exchanged views on cooperation between Azerbaijan and the Council of Europe and its development prospects, as well as the current situation in the region.

Minister Jeyhun Bayramov emphasized the importance of the cooperation between Azerbaijan and the CoE and noted that the work on the Action Plan for 2022-2025, which constitutes the general framework of cooperation and which was developed based on the needs of Azerbaijan, is ongoing.

The minister informed his interlocutor of the post-conflict situation in the region and the large-scale provocations of Armenia. He provided detailed information on the steps taken by Azerbaijan, the delimitation process, as well as the restoration and reconstruction work carried out in the liberated territories.

FM Bayramov highlighted the grave consequences of the landmine threat in the liberated territories of Azerbaijan, as well as mining of the territories of Azerbaijan in which mines were used that were manufactured in 2021 in Armenia. The importance of the delimitation of the borders with Armenia, the opening of all communications, as well as the full implementation of the provisions of the tripartite statements, and the signing of the peace agreement for regional stability and growth were emphasized. The minister also pointed to the meeting with the Minister of Foreign Affairs of Armenia on September 19.

Secretary General Marija Pejčinović Burić recalled with satisfaction her visit to Azerbaijan as the Secretary General of the Council of Europe. The fact that the Action Plan between the Council of Europe and Azerbaijan defines the priorities between the parties and the importance of their implementation was pointed out. The importance of observing the ceasefire in the region, resuming negotiations and advancing the normalization process was stressed. The organization expressed readiness to implement confidence-building measures.

Current issues on the international agenda, as well as other areas of mutual interest, were discussed.