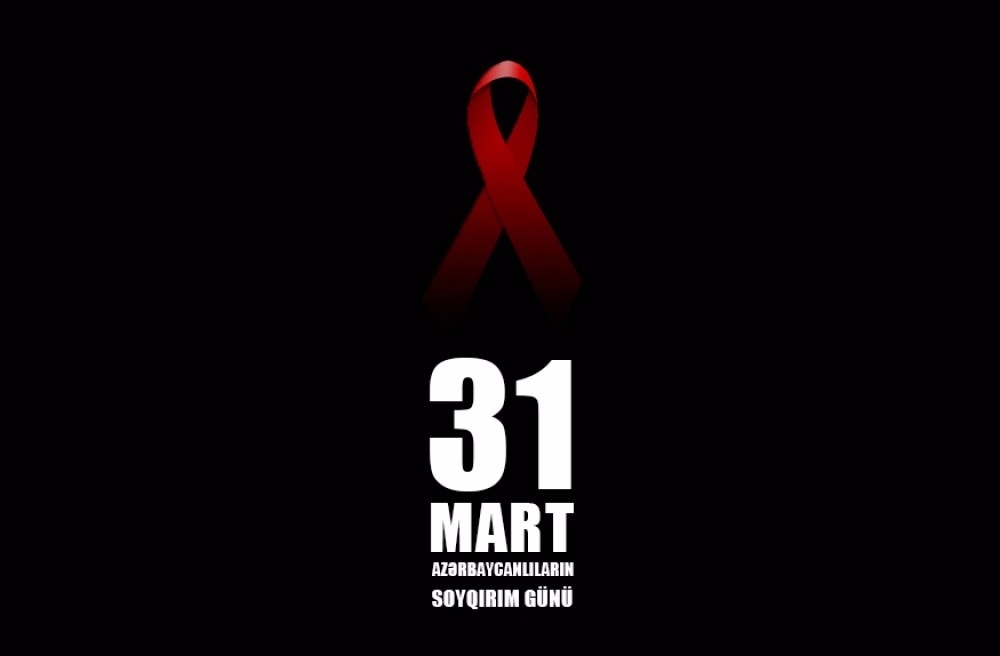 According to Azerbaijan in Focus, reporting AzerTac, Azerbaijani Commissioner for Human Rights (Ombudsman) Sabina Aliyeva has issued a statement on March 31- Day of Genocide of Azerbaijanis.

“One of the bloodiest pages of the policy of ethnic cleansing pursued by the Armenian nationalists against our people at different stages of history is the genocide committed against the Azerbaijanis in March-April, 1918.

“The genocide against the Azerbaijani people committed by the armed groups of dashnak Armenians and their supporters had resulted in mass killing of tens of thousands of civilians due to their ethnicity and religion in Baku city, different regions of Baku governorate, and other cities, including Shamakhi, Guba, Khachmaz, Lankaran, Hajigabul, Salyan, Kurdamir, and other districts. The residential areas, cultural monuments, mosques, and cemeteries were brutally destroyed. Many ancient buildings, including the “Ismailiyya” building, one of the most beautiful architectural monuments in Baku, the offices of “Achig Soz”, “Kaspi” and “Baku” newspapers, and shrines were destroyed by artillery fire, the minarets of the “Tazapir” Mosque were severely damaged, and the ancient “Juma” Mosque in Shamakhi was set on fire.

“The mass annihilation and pillaging started in Baku province later continued in Karabakh, Zangazur, Nakhchivan, Iravan, Goycha, and other regions. Tens of thousands of Azerbaijanis became victims of mass atrocities committed by the Armenians. The dashnaks had destroyed, burned, and plundered 110 villages in Shamakhi, 167 in Guba, over 150 in Karabakh, 115 in Zangazur Provinces, and 98 in Kars Oblast; innocent people, including women, children and the elderly, were brutally murdered. Furthermore, 199 villages in and around Iravan city, which was a historical territory of Azerbaijan, have been ruined and 132,000 Azerbaijanis have been mercilessly murdered.

“Within past years, many new facts and evidential documents have been collected as a result of investigations carried out in recent years, and a mass grave was discovered in Guba city. Guba Genocide Memorial Complex, which has been established on this site, visually reflects the vandalism of Armenians against innocent Azerbaijanis.

“The massacre of tens of thousands of civilians in 1918 on ethnic and religious grounds, the planned and gradual manner of these criminal acts, as well as commitment of such crimes in various parts of Azerbaijan must be interpreted as a crime of genocide.

“The UN General Assembly Resolution 96 (I) of December 11, 1946, states that genocide is denial of the right to existence of entire human groups, as homicide is the denial of the right to live of individual human beings. According to the Convention on the Prevention and Punishment of the Crime of Genocide, adopted by UN General Assembly Resolution 260 (III) of December 9, 1948, genocide means any act committed with intent to destroy, in whole or in part, a national, ethnical, racial or religious group.

“Unfortunately, the genocide committed against Azerbaijanis in 1918, has not yet received its political and legal assessment at the international level.

“The indifference demonstrated by the international community to the crimes of genocide against one nation committed as a result of hate speech policy pursued for centuries, as well as the failure to bring the perpetrators to justice may cause the development of impunity syndrome, provoking new crimes and widespread human rights violations.

“We call on the world community and international organisations not to remain silent about the genocide committed against Azerbaijanis in 1918, which is a crime against humanity, to recognise this heinous crime as an act of genocide at the international level, and to show determination and justice, without double standards, being guided by the norms and principles of international law.”

This Statement is addressed to the UN Secretary-General, UN Security Council, UN Office of High Commissioner for Human Rights, UN Office of High Commissioner for Refugees, UN Human Rights Council, the United Nations Children’s Fund, the United Nations Educational, Scientific and Cultural Organisation, European Union, Council of Europe, Organisation for Security and Co-operation in Europe, International and European Ombudsman Institutions, Asian Ombudsman Association, Organisation of Islamic Cooperation and the Ombudsman Association of its member states, Independent Permanent Human Rights Commission of the Organisation of Islamic Cooperation, European Network of Ombudspersons for Children, International Peace Bureau, different ombudsmen and national human rights institutions, embassies of the Republic of Azerbaijan in foreign countries and the foreign embassies in Azerbaijan, as well as to the Azerbaijani Diasporas.