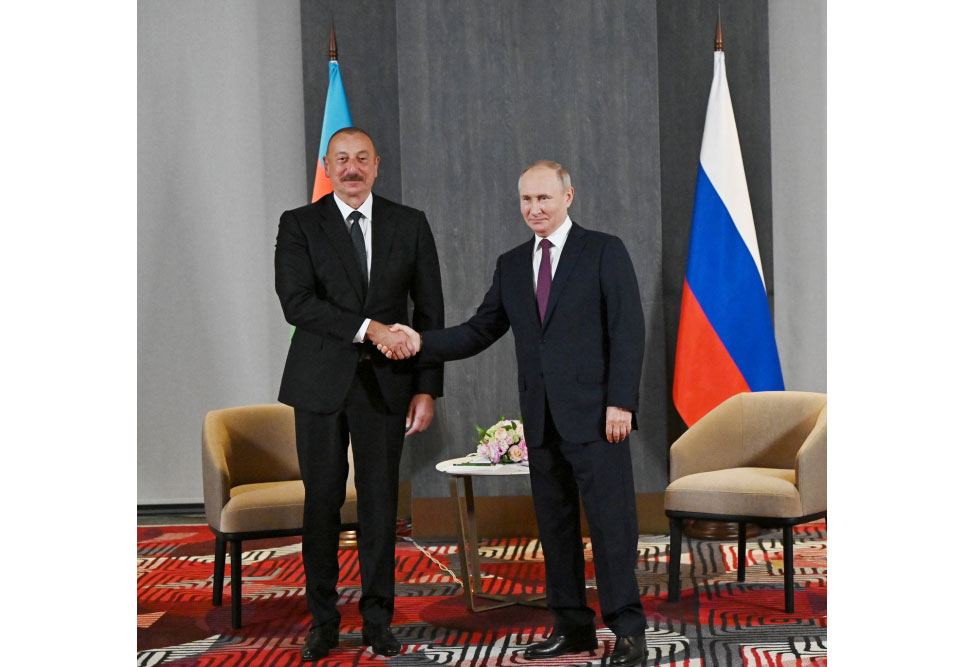 – Dear Ilham Heydar oglu, I am very pleased to see you – this time on the sidelines of the Shanghai Cooperation Organization, the summit of this organization.

You and I have already talked to each other many times today, exchanging views on the work of the organization itself, bilateral relations, as well as the situation in the region.

Of course, we are all very worried about the aggravation of the situation on the Armenia-Azerbaijan border today. We talked about this. As you know, I informed you about it, I spoke with Armenian Prime Minister Nikol Pashinyan last night. It is good that the escalation was finally stopped through coordinated effort, but as far as I understand, it still remains tense.

I am very glad to have the opportunity to see you and talk about all these issues, because they are all important.

– Thank you, Vladimir Vladimirovich, I am very pleased with our new meeting.

Less than three months have passed since our last meeting, but we have been in constant contact all this time, talking on the phone. We are also seeing a very positive momentum in bilateral relations.

After the signing of the Declaration on allied interaction, important documents were signed on various other sectors as well. In general, as you noted, we are observing growth in the turnover and in the volume of cargo transportation. Also, we now intend to fully engage our transit capabilities. So the results are obvious. I am sure that we will finish this year with good results in all areas.

I would also like to express my gratitude to you for your prompt response to the aggravation and escalation on the Armenia-Azerbaijan border. The clashes lasted less than eight hours and have now stopped – although the Armenian side did not immediately begin to implement the ceasefire. In general, the ceasefire has been observed for about two days. Border conflicts happen, but the main thing is that we have managed to stabilize the situation and introduce peaceful conditions.

According to the information I am now receiving from the ground, as I said, the situation has been stable for about two days. The main thing now is not to disrupt the beginning process of normalization of relations, to start moving in this direction. We are welcoming the efforts of Russia towards this, including those made within the framework of the tripartite commission at the level of deputy prime ministers of Russia, Azerbaijan and Armenia for transport communications, within the framework of the delimitation process, as well as plans to start negotiations on a peace agreement. Of course, we will discuss this in detail.

I want to say again that Azerbaijan is committed to the trilateral documents that were signed by Russia, Azerbaijan and Armenia after the second Karabakh war, and we will do everything to ensure that the situation in the Caucasus is stable.