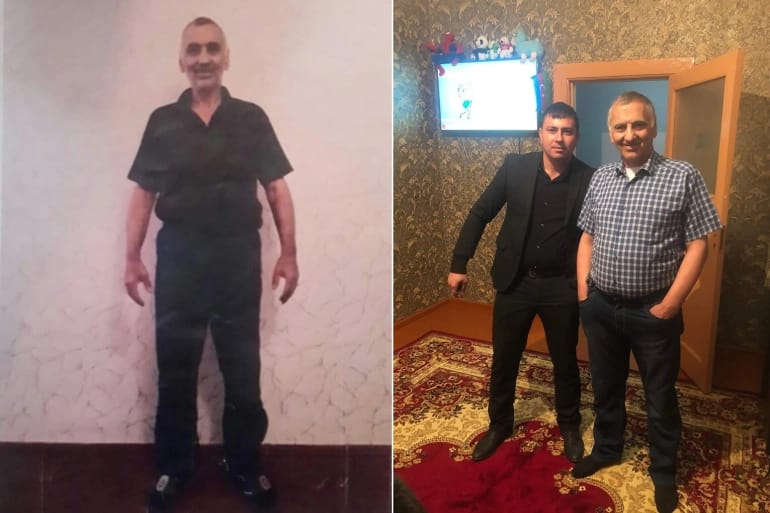 Left: Asgarov pictured in prison, where he lost weight and alleges he was tortured. Right: Asgarov back at home with his son, Kurdoqlu, in Shamkir [Courtesy: Dilgam Asgarov]

Dilgam Asgarov, released from Armenian captivity after six years as part of a ceasefire deal, says guards broke his fingers and electrocuted him, as he recounts ordeal.

Baku, Azerbaijan – Dilgam Asgarov’s mother is buried in Kalbajar district, the region in Azerbaijan where he was born.

As a young man, still grieving and in pain, he used to visit her grave frequently.

But in the early 1990s, when Armenia-backed forces captured the area as part of a bloody war with Azerbaijan over Nagorno-Karabakh, making that visit became seemingly impossible.

Yet still determined to pay his respects, Asgarov and others risked their lives to enter their old home towns and villages, then occupied by ethnic Armenians, to pray at the graves of their loved ones.

On many occasions, Asgarov, now 60, made the journey unscathed.

To go unnoticed, he took long and winding routes, through mountains he knew like the back of his hand.

In July 2014, however, as they visited Kalbajar to visit their relatives’ graves, Asgarov and another Azerbaijani, Shahbaz Guliyev, were seized by Armenia-backed troops. A third Azerbaijani, Hasan Hasanov, was shot to death.

At the time, Asgarov had been living and working in Russia, cutting trees and selling wood, managing to come home only infrequently to see his family, and tensions between Baku and Yerevan were high, with several clashes between Armenian and Azeri soldiers.

Armenian officials said the three men were performing reconnaissance operations, accusing them of crossing the line of contact, and kidnapping and torturing a 17-year-old – charges Asgarov and Guliyev have always denied.

“I had been watched by helicopter,” he said. 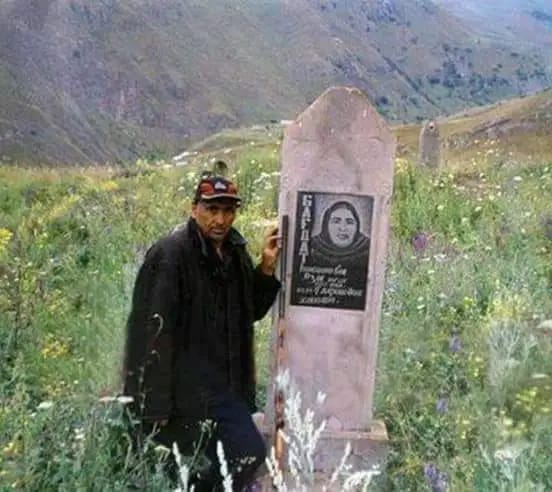 Asgarov spoke to Al Jazeera by phone from his home in Kalbajar, which is one of the regions Armenia returned in late November this year as part of a Russia-brokered ceasefire, following weeks of deadly clashes.

As part of the deal in November, both sides also pledged to exchange dozens of prisoners – among them Asgarov and Guliyev. They arrived home in December.

Once arrested in 2014, Asgarov and Guliyev were taken to a prison in Stepanakert, a central city in Nagorno-Karabakh known as Khankendi to Azerbaijanis.

When Asgarov first appeared in court, he was blindfolded but walking normally. At a second appearance, he could be seen in video footage limping – evidence, Azerbaijanis said, of mistreatment.

The Nagorno-Karabakh court, which was not recognised by international law, sentenced Asgarov, who was accused of spying, murder and other charges, to life imprisonment, and Guliyev to 22 years in prison.

“They set up a court of their own, a court that is not recognised in the world. We were accused of espionage, trespassing state border and murder. Of course, I denied all charges. First, I am not a spy, I visited my mother’s grave. Secondly, I did not violate the borders of any state, I was moving in my own territory, and thirdly, I did not know about the death [of the 17-year-old].”

The two men pleaded not guilty.

“They broke my fingers,” he said, alleging torture at the hands of the Armenians who imprisoned him. “I was immobilised from the heavy blows to my head. They didn’t even allow me to breathe normally.

“I lost 40 to 45 kilos in a year. I was electrocuted. The severity of the torture I received could be seen when I was brought to trial. Then, I was transferred to Shusha prison and stayed there for five years.”

The prison guards were a mixed group – some Armenians from Yerevan, and others, known commonly as ethnic Armenians, from Nagorno-Karabakh.

Asgarov says those from Karabakh treated him better.

“During my one year in Khankendi, I was given only pasta, water and some bread. Armenians from Karabakh were giving me chocolate and sausages. They were doing it secretly from the Armenians of Yerevan.”

Each day, for the six years he was jailed, his only exercise was a brief daily walk within prison grounds.

From his cell window in Shusha, he could see several houses that had been destroyed in the 1990s war – his only view to the outside for years.

But a radio donated by the Red Cross kept him well informed.

“The radio was catching the Azerbaijani radio waves. On the day the radio was given to me, the Armenians took it apart in front of me and looked inside, as if something might be hidden there. They saw nothing, fixed it and returned it to me. Because the Red Cross gave it to me, no one dared to take it from me. I heard on that radio that the regions were being liberated from occupation.

“I heard about President Ilham Aliyev’s meetings, foreign visits and the process of resolving the Nagorno-Karabakh conflict. I learned about the internal political situation in Azerbaijan, even the diplomatic tensions between Russia and Turkey, and then the reconciliation of these countries.”

As for food, he lived on a diet of bean stew and buckwheat.

The Armenian guards spoke to him in Russian or Azerbaijani.

“It was sad. I knew when it was the New Year, then Nowruz, then my birthday. All the while, held in solitary confinement, I was congratulating myself alone.”

He heard about the recent clashes between Azerbaijan and Armenia on his radio.

“On September 27 (when the recent war broke out), we could hear heavy artillery fire. One of the prison guards, Galstyan, came to the cell and asked me what had happened. I laughed and replied, ‘You are the one who is free, I don’t know what is happening!’ They closed all the windows of the prison.”

When the clashes over Nagorno-Karabakh escalated, Asgarov and Guliyev were removed from the Shusha prison and taken to Armenia. 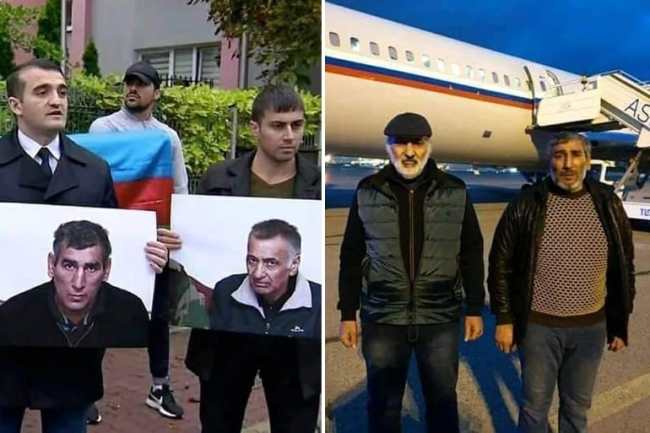 Left: Protesters hold placards of Shahbaz Guliyev and Dilgam Asgarov, calling for their release. Right: Asgarov and Guliyev travel back to Azerbaijan after being held in Armenia, following the recent ceasefire deal [Courtesy: Dilgam Asgarov]

After the ceasefire was brokered in November, they were flown back to Azerbaijan, and spent some time in quarantine, in line with measures to stem the spread of coronavirus.

Then, they headed to emotional reunions; while he was away, Asgarov’s family mourned and grew without him.

Crowds of Asgarov’s friends and neighbours gathered to welcome him home in Shamkir.

“During this time, I had three grandchildren – two boys and a girl. My father, aunt, father-in-law and mother-in-law passed away. My grandson, born in 2014, was named after me, Dilgam.”

For the first time in six years, he was able to bring in a new year with his family.

“Now I am at home and spent the New Year with my family,” he said.

“Kalbajar is free now, and so am I. From now on, I will go to our district, to my mother’s grave in a direct way, there is no need to fall into the mountains.” 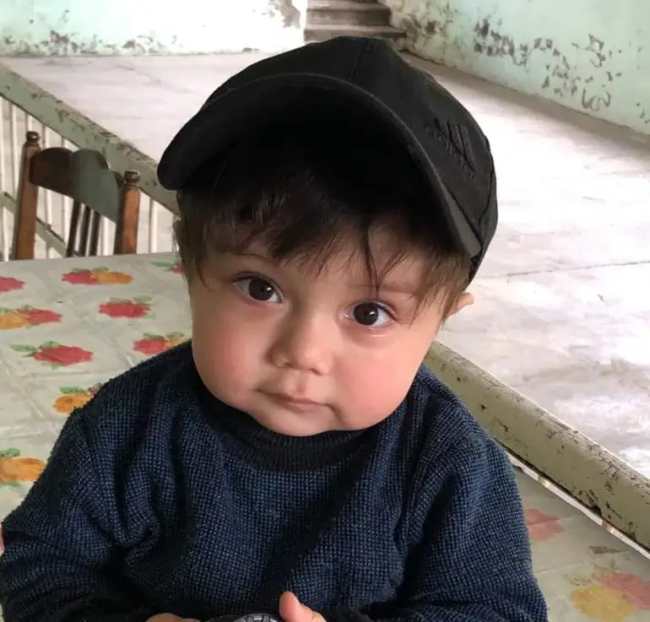 This article originally appeared in ALJAZEERA on 05 Jan 2021.