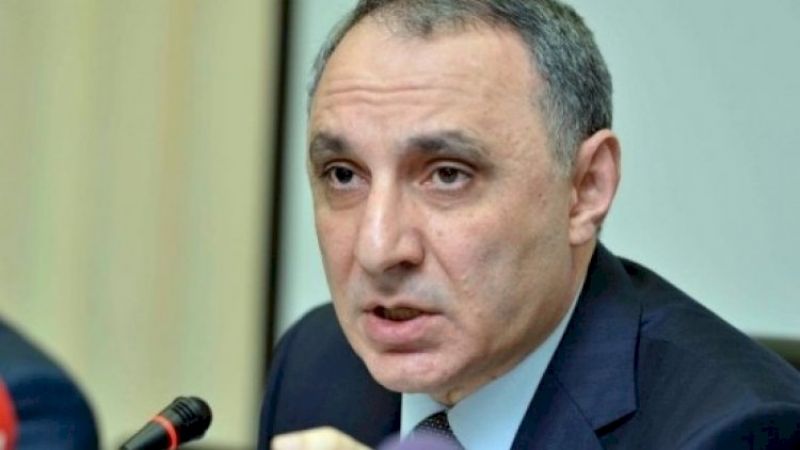 Azerbaijani Prosecutor-General: “Armenians Used Scud, Point U and Tornado Missiles Against Us”

Turan News (TN): Since the first Armenian–Azerbaijani Nagorno-Karabakh conflict, Azerbaijan has raised the issue of Armenian war criminals. Has a comprehensive list of these ‘wanted’ men from both wars been produced?

Kamran Aliyev (KA): There is such a list and, since the end of 1988, when this conflict began, many crimes have been committed against the Azerbaijani population. Since then, we have filed numerous lawsuits. Thereafter, a special group was created in the Military Prosecutor’s Office and a special department was created to investigate these crimes. In particular, criminal cases were initiated regarding the crimes committed in Khojaly, Meshabeyli and Baganis Ayrim. In total, over 200 lawsuits have been initiated.

In total, charges have been brought against 307 people, and they have been put on the ‘wanted’ list. One of these is under arrest – Alaverdyan – a representative of the Armenian intelligence, detained in August 2020 in the Goranboy region.

I would divide all these cases into several groups: Crimes committed before May 12, 1994 (ed: the signing of the Bishkek protocol on the Azerbaijani–Armenian ceasefire).

The second group is from May 12, 1994 to September 27, 2020. During this period, about 300 servicemen and civilians were killed. Separately, the April 2016 ‘Four Day War’ has been emphasised, where a criminal case was initiated against seven Armenian military personnel.

Also highlighted are the July 2020 events in the Tovuz region, when a civilian was killed and civilian infrastructure was damaged. The final group of criminal cases refers to crimes committed during the 44 days of hostilities that began on September 27.

TN: The General Prosecutor’s Office has announced the filing of lawsuits against Seyran Ohanyan, the former Armenian Defence Minister. However, his name has already been mentioned amongst the 38 accused of masterminding the Khojaly Genocide. Ohanyan has been repeatedly added to the Azerbaijani ‘wanted’ list. What is different about the decision this time?

KA: At various times, Seyran Ohanyan held different posts in Armenia and Karabakh, which is where he was born. He was involved in various crimes against the peaceful Azerbaijani population and placed on the ‘wanted’ list. However, this was not about the Khojaly case, but referred to earlier crimes.

He also actively participated in the Khojaly Genocide. Previously, we placed 39 soldiers on the ‘wanted’ list for their involvement in this atrocity, but Ohanyan was omitted. Of these 39 people, according to our data, three have subsequently died and one was detained in New York in 2009 on arms trafficking charges.

After reinvestigating the Khojaly events, we concluded that there is sufficient evidence to bring him to justice and add him to this ‘wanted’ list.

TN: The Armenian General Movses Hakobyan recently stated that Armenia used Iskander missiles during the recent hostilities against Azerbaijan, without saying in which direction these missiles were fired. Do we have any additional information about this?

KA: I can only rely on facts, and we have no evidence of the use of Iskander missiles by the Armenian side. We analysed all the remains of missiles fired in our direction and undertook an examination in conjunction with the relevant Azerbaijani structures.

I think it was a bluff on the part of Hakobyan for some kind of internal political gain. At the same time, there is accurate data on the use of other equally destructive missiles by the Armenians, such as Scud, Point U and Tornado. Cluster bombs were used against the city of Barda seven times.

These missiles were not recently developed and were transferred to Armenia some time ago. On the other hand Iskander missiles are of the new generation. They are in Armenia, but I do not believe think they are under the operational control of the Armenian side. This kind of weaponry is too advanced. I believe that the control panel for these missiles is in the hands of the Russians.

“We strongly condemn the treacherous terrorist attack against the Embassy of Azerbaijan in the Islamic Republic of Iran,” said Azerbaijan’s Ministry of Foreign affairs in ... Read More

President of the Arab Republic of Egypt Abdel Fattah El-Sisi has arrived in the Republic of Azerbaijan, according to Azerbaijan in Focus, reporting AzerTac. A ... Read More

The cooperation between Azerbaijan and Kazakhstan during the last 30 years can be characterized as a shining example of relations built on trust and respect ... Read More