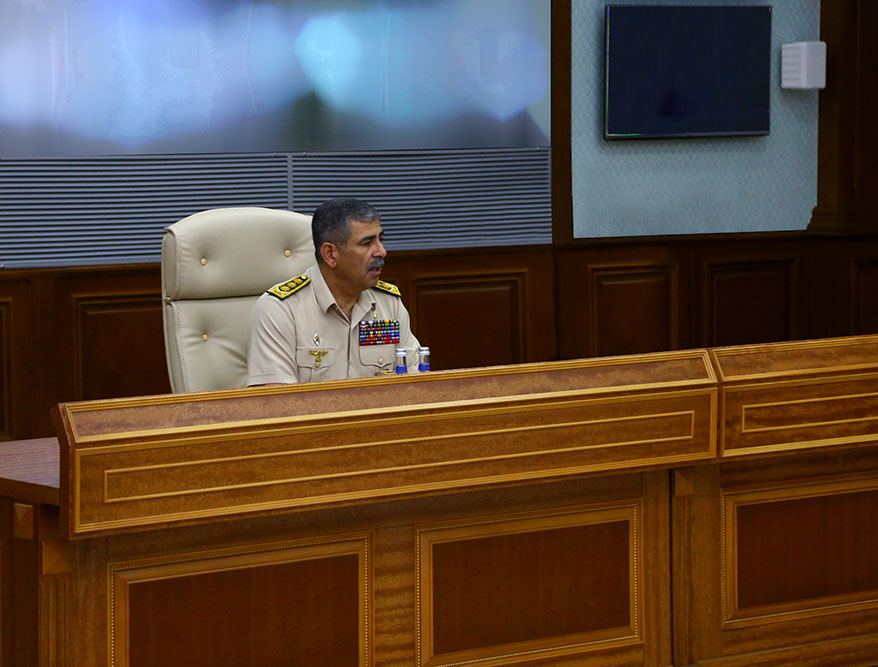 Minister of Defense, Colonel General Zakir Hasanov held an official meeting with Deputies of the Minister of Defense, Commanders of types of troops, Chiefs of Main Departments, Departments, and Services of the Ministry at the Central Command Post on July 30, according to Azerbaijan in Focus, reporting Trend News, citing the Azerbaijani Defense Ministry.

Commanders of the Army Corps and formations stationed in the liberated territories were also involved in the meeting via video teleconference.

Noting that during the meeting on the results of six months of the current year, held under the chairmanship of the President of the Republic of Azerbaijan, Supreme Commander-in-Chief of the Armed Force Ilham Aliyev, the head of state highly appreciated the activities of the Azerbaijan Army, the defense minister noted that the opinions expressed by the head of state are important tasks assigned to the Azerbaijan Army.

The minister extensively analyzed the operational situation and the current circumstances on the Azerbaijani-Armenian state border, as well as in the Karabakh economic zone, where the Russian peacekeeping contingent is temporarily deployed, and ordered to be constantly ready to immediately and resolutely suppress any possible provocation of the opposing side.

The meeting participants were informed that inspections based on the final results of the six-month combat training process would be conducted on the troops.

Colonel General Hasanov instructed to pay attention to the professionalism of servicemen and troops’ combat training during the new training period, increase the intensity of exercises and field training, as well as maintain a high level of combat readiness.

The defense minister gave instructions to the relevant officers on completion of the work on preparation for the winter in the units in a planned manner, timely delivery of the necessary supplies to the units stationed in mountainous areas, the recruitment and distribution of young soldiers in the relevant units, as well as the high-level organization of preparation for the Military Oath taking ceremonies.

Analyzing the compliance with safety rules in daily service activities, Colonel General Hasanov highlighted the significance of constantly conveying these rules to the military personnel and controlling strict compliance.

At the end of the official meeting, senior officials were given specific tasks on organizing the troops’ service, further improving service and social and living conditions, as well as continuing the necessary measures for engineering support.