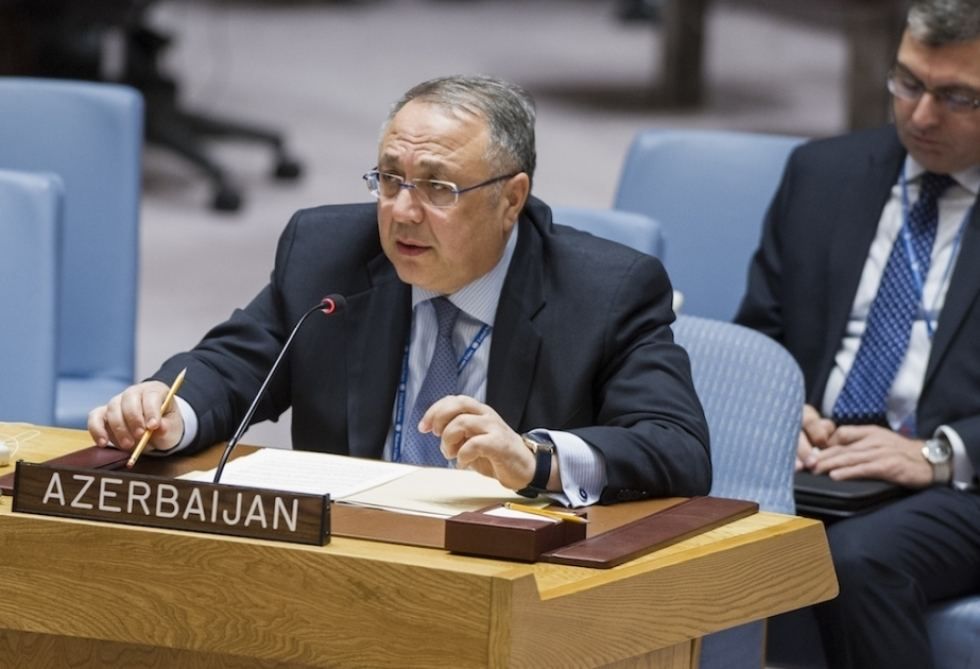 Armenia is far from fulfilling its international obligations, Azerbaijan’s Permanent Representative to the UN Yashar Aliyev said, according to Azerbaijan in Focus, reporting Azernews.

He made the remarks at a meeting of the UN Security Council dedicated to the escalation that occurred on the state border between Azerbaijan and Armenia.

“We categorically reject the accusations made by the representative of Armenia. These accusations, which are completely delusional, distorted and deceitful, show how far Armenia is from fulfilling its international obligations and promoting peace, stability and cooperation in our region,” he stated.

He emphasized the irony of Armenia, the country that carried out aggression against Azerbaijan, held its sovereign territories under occupation for about 30 years, carried out large-scale ethnic cleansing, and committed other heinous crimes during the war, is now willingly speaking about the norms and principles that it constantly violates, and appeals with the hope of unlimited immunity to the UN Security Council, whose resolutions it has refused to comply with since the early 1990s.

Further, he added that Azerbaijan is firmly committed to restoring the liberated territories and ensuring stability and development in the region.

“Azerbaijan stands for the opening of regional transport communications and the prosperity of the South Caucasus. Azerbaijan’s position is based on international law and accepted practices,” he said.

Aliyev stressed that Armenia’s attempts to evade the implementation of the reached agreements make it a violator of international obligations.

He noted that the current escalation of the situation on the Azerbaijani-Armenian border is not the only incident, but just another Armenian provocation over the past few months.

Further, Aliyev added that Armenia continues to plant mines on the territory of Azerbaijan.

During the meeting, Deputy Secretary General for Europe, Central Asia and America Miroslav Zhenka stated that the UN is concerned about threatening tensions that have arisen in the South Caucasus between Armenia and Azerbaijan, and calls on the parties to take serious steps to de-escalate.

According to him, UN teams in both countries are in contact with governments, and if conditions allow, the organization is ready to help meet emerging humanitarian needs.

“This is the biggest and most serious conflict since 2020. This fact proves that the process of normalizing relations between the two countries is facing obstacles. The latest escalation highlights the need for the parties to move forward in the ongoing process of delimitation and demarcation in the framework of mutual recognition of territorial integrity and sovereignty. We call on the parties to use this important mechanism to reduce tension on the border. The clashes once again urge for the constructive participation of actors in this region and beyond for a peaceful solution,” the official highlighted.

Noting the mediation of the EU and Russia, Zhenka added that the UN fully supports these international efforts. He stressed that their activities can create conditions leading the parties to dialogue to achieve long-term peace.

To recap, units of the Armenian armed forces carried out large-scale provocations along the Azerbaijani-Armenian state border in the Dashkasan, Kalbajar, and Lachin directions during the night of September 13. At night, Armenian sabotage groups mined land and supply roads linking the positions of the Azerbaijani army units in different directions, taking advantage of the area’s steep topography and existing ravine gaps.

The clashes between the sides ensued as a result of the urgent efforts made by the Azerbaijani armed forces to quell these activities. As a result, 77 armed forces personnel were killed, the ministry detailed.

The Azerbaijan military units stationed in these areas took decisive retaliatory measures to suppress the provocations of the Armenian armed forces and military threats to Azerbaijan’s territory and sovereignty, as well as to ensure the safety of military personnel, including civilian workers involved in infrastructure construction in Kalbajar and Lachin districts, the ministry emphasized.