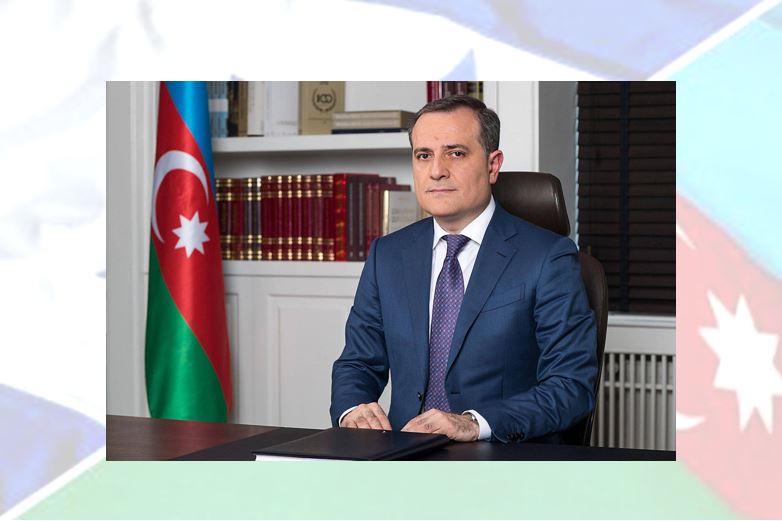 In an exclusive interview with Israel Hayom, Azerbaijani Foreign Minister Jeyhun Bayramov says ties between Baku and Jerusalem are "close and mutually beneficial" and cover "political, economic, military and other fields."

The relationship between Israel and Azerbaijan is one of Jerusalem’s most unique achievements: close ties with a Shiite-majority country that sees Israel as one of its oldest allies, and certainly one of its most strategic partners.

The scope of the two nations’ deep friendship was revealed during the 2020 Nagorno-Karabakh war, in which Azerbaijan marked a resounding victory in part with the help of Israeli weapons.

One must also remember that Azerbaijan borders Iran on its south and Baku has been able to successfully navigate relations with Jerusalem and Tehran.

In an exclusive interview with Israel Hayom, he talks about his country’s special relationship with Israel, his gratitude to Jerusalem for its assistance during and after the Nagorno-Karabakh conflict, his appreciation for Prime Minister Benjamin Netanyahu, and also touches on the possibility that Baku will mediate between Jerusalem and Tehran.

“Azerbaijan and Israel enjoy strong bilateral relations and good friendship. Israel was one of the first countries that recognized the independence of Azerbaijan, and we highly appreciate it. Our cooperation is close and mutually beneficial, and it covers political, economic, military, and other fields,” Bayramov said.

Q: Does Azerbaijan see Israel as a strategic partner?

“The Azerbaijan-Israel partnership is strong, comprehensive and multidimensional. We are satisfied with the level of development of relations between our countries. To boost our cooperation we have already signed more than 10 agreements, while 20 more various drafts are under consideration. These documents constitute a good framework for the development of our relations.”

Q: What do you think about Prime Minister Benjamin Netanyahu’s efforts to foster relations between Israel and Azerbaijan?

“Personal relations between the leaders of our nations play an important role in the development of the inter-state partnership. Prime Minister Benjamin Netanyahu last visited Azerbaijan in late 2016. This visit was very productive. Important documents were signed on this occasion. They included, among others, an agreement to establish a joint economic commission.”

Q: Did the achievements marked in the Nagorno-Karabakh War strengthen the ties between the countries?

“During the patriotic war in 2020, Azerbaijan enjoyed sincere support from Israeli society. We highly appreciate the humanitarian assistance [provided] by Israel to the victims of the barbaric missile attacks by Armenia on the city of Ganja, located far from the warzone, which claimed the lives of 33 Azerbaijani civilians,” he said.

“Israelis of Azerbaijani descent organized rallies to demonstrate their protest against aggression by Armenia and to express solidarity with Azerbaijan.

“The skillful use by the Armed Forces of Azerbaijan of high technology and high precision weapons, including those produced in Israel, in particular drones, played an important role in achieving military victory. I am confident that our bilateral ties will be further strengthened and deepened in various fields after the Patriotic War.”

Q: Will Israel be involved in the rehabilitation of Nagorno-Karabakh? And if so, how?

“After the restoration of our territorial integrity, we have entered the post-war era. Now the top priorities include rehabilitation and reconstruction of the liberated territories and return of the IDPs to their homeland.

“We welcome the participation of friendly countries and partners in the rehabilitation process. Of course, Israeli companies may join too. The workload is enormous. It includes, but is not limited to the demining, building of infrastructure and establishment of smart cities and villages.”

Q: How bad is the infrastructural situation in Nagorno-Karabakh after the Armenian neglect?

“It is hard to describe the degree of destruction in the liberated territories of Azerbaijan, which include hundreds of towns and villages,” Bayramov noted.

“Almost all cultural monuments and religious sites, hospitals, schools, and residential buildings were looted and then razed to the ground. Places, where the Azerbaijani population numbered tens of thousands, became ghost towns.

“In many cases, there is not a single building [has been] left to simply raise a flag upon. All liberated areas are heavily contaminated with mines and unexploded ordnance. Great damage was inflicted upon the environment too. Up to 20% of all forests were deliberately exterminated,” he continued.

“During decades of occupation, Armenia did everything to prevent the return of hundreds of thousands of Azerbaijani IDPs to their original homes. But we are determined to rebuild, reconstruct and rehabilitate these territories. Peaceful life will be brought back to the liberated areas in full force.”

Q: What is your reaction to Armenia’s claims that Azerbaijan harmed innocent people in the war?

“During and after the war Azerbaijan has always strictly observed the norms and principles of international humanitarian law, including the Geneva Conventions of 1949,” Baku’s top diplomat stressed.

“On the very first day of hostilities, the Azerbaijani military command issued special instructions for the military personnel on the need to abide by the Geneva Conventions. Our army has never deliberately targeted civilians, whom we consider to be our citizens. Moreover, our army is equipped with high-precision weapons, including Israeli-made [ones], which allow [us] to significantly reduce so-called ‘collateral damage.'”

“In the meantime, the enemy often deployed heavy artillery and rocket systems in residential areas. Armenian forces actively used these weapons to shell densely populated Azerbaijani areas. The Azerbaijani town of Terter suffered particularly heavy destruction and was even dubbed as ‘Stalingrad’ by foreign reporters.

“Armenian commanders often used schools and kindergartens as military headquarters. All these facts were recorded by foreign journalists reporting from the Armenian side. It should be noted that 101 Azerbaijani civilians were killed and about 500 were wounded in missile and artillery attacks by the armed forces of Armenia. Each case of civilian fatality is documented in Azerbaijani Ombudsperson’s reports with all details and circumstances.

“Of  course, we regret the loss of every human life whether Azerbaijani or Armenian, but it should be stressed that even according to official data presented by Armenia, the number of Armenian civilian victims is twice less than the number of Azerbaijani civilians who lost their lives during the hostilities.”

Q: Unlike many countries in the Caucasus region, Azerbaijan is known as a nation that has a very strong connection to its Jewish community. What is the key to this historic success?

“Azerbaijan is recognized as one of the international centers of multiculturalism,” Bayramov explained.

“For centuries, Jews and Azerbaijanis have lived here in peace and friendship. We are proud to continue this good tradition today. The Jewish community is a very active part of our society.

“There are seven synagogues in Azerbaijan, five of them in Baku. We have Jewish schools and cultural centers too. Close relations between our nations and active people-to-people contacts are an important part of our bilateral ties. The Jewish community of Azerbaijan and Azerbaijani diaspora in Israel, consisting mainly of Jews from Azerbaijan, play a very active role in developing our relations.”

Q: Do you believe that Azerbaijan has the capabilities to mediate between Israel to Iran?

This article originally appeared in Israel Hayom on 04 April 2021.