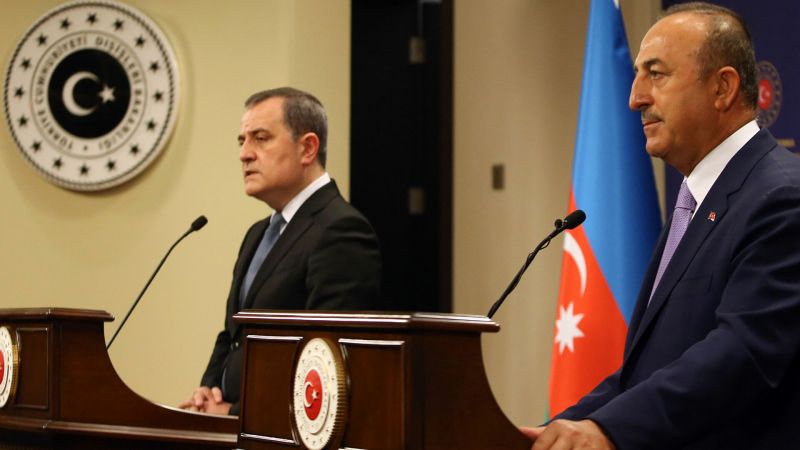 Baku and Ankara to coordinate actions in Ukraine and the Caucasus

Azerbaijan and Turkey are pursuing a coordinated foreign policy in the international arena, according to Azerbaijan in Focus, reporting Turan News, with reference to statements made at a joint press conference of Foreign Ministers of the two countries Jeyhun Bayramov and Mevlut Cavusoglu on March 5 in Baku. On Saturday, the Turkish minister held a meeting with the head of Azerbaijan, Ilham Aliyev, and later with Jeyhun Bayramov.

The topic of the talks was the situation in the South Caucasus, the possibility of opening communications between Azerbaijan and Armenia, the issues of delimitation of borders with Armenia, the normalization of Armenian-Turkish relations, Bayramov said at a joint press conference following the meeting with Cavusoglu.

He also noted that the parties discussed the organization of trilateral and quadrilateral meetings with the participation of neighboring countries. “Three and four-party meetings will be organized soon. Today, issues of preparation and the Roadmap of these formats were discussed,” Bayramov said, without specifying which countries, except for Azerbaijan and Turkey, are in question.

The second issue discussed at the meeting was the situation in Ukraine. “These events cause very serious concern, Azerbaijan and Turkey are very active in search of ways to resolve the conflict, maintain active contacts with the leaders of Russia and Ukraine. We hope that the negotiations between Moscow and Kyiv will yield results,” Bayramov said.

Both countries are cooperating in the issue of exporting their citizens from Ukraine, Mevlut Cavusoglu said in turn.

“We are against violent changes in the borders of states and we are against the war in Ukraine. We are taking steps to end this war,” Cavusogu said.

Further, he said that he informed Baku about the steps to normalize relations with Armenia. Thus, the leaders of 40 countries, including Armenia, as well as Israel and Cyprus, have been invited to the Antalya high-level forum, the Turkish Foreign Minister said.

In turn, Bayramov said that Baku considers the normalization of Armenian-Turkish relations positive. “We also offer Armenia to conclude a peace treaty. This is a chance for Armenia. In this issue, Baku and Ankara fully coordinate their actions,” he stressed.

Our negotiations with Armenia are consistent with Azerbaijan. The goals of our countries are the stability and development of the region, the restoration of ties, and peace.

Answering a question about the fate of Azerbaijani citizens in Ukraine, Bayramov said that today 9,500 Azerbaijani citizens and members of their families have been taken out of there. There is an agreement with neighboring European countries on their transit pass without visas.

Bayramov also acknowledged that among the Azerbaijani diaspora in Ukraine there are those who died during shelling and bombing. Azerbaijan sent two planes with humanitarian and medical cargo to Ukraine for a total of 5.5 million euros, he said.