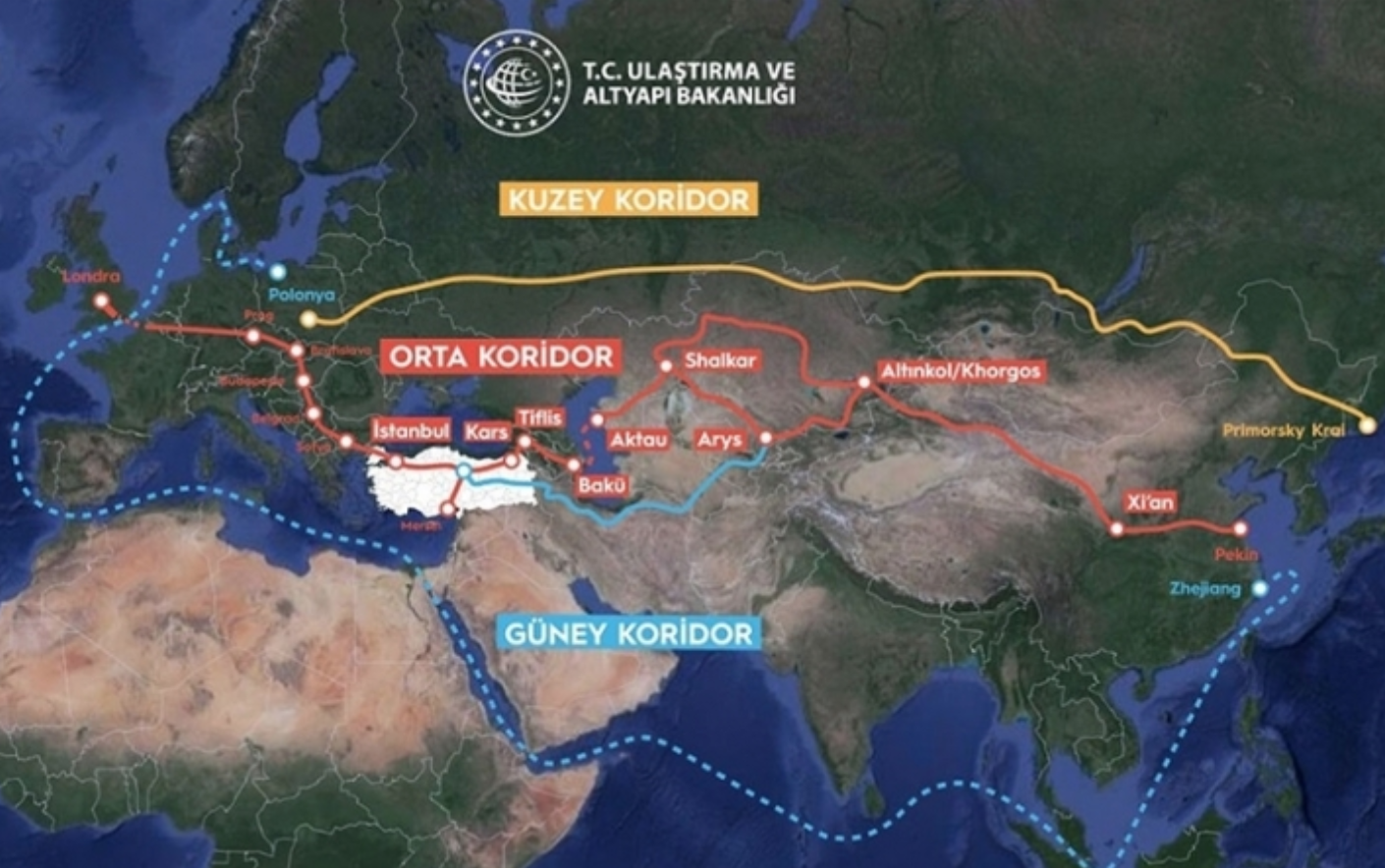 The President of Azerbaijan held fruitful talks in Tbilisi with the head of the government of Georgia, the main economic topics of which were the prospects for an increase in the transit of hydrocarbons through Georgia, as well as plans for the Middle International Transport Corridor (China-Kazakhstan-Caspian-Azerbaijan-Georgia, from Georgia either to Turkey, or through the Black Sea – to Europe), according to Azerbaijan in Focus, reporting Turan News.

In the first half of October, Aliyev discussed the development of the Middle Corridor (the so-called Trans-Caspian International Transport Route – TITR) with his Kazakh counterpart in Astana as part of the CICA summit, and the continuation of negotiations in Tbilisi on the same topic after only 10 days indicates that the project received new powerful impetus and promptly responds to the existing geopolitical realities associated with the confrontation between the Russian Federation and the West over Ukraine.

The volumes have been growing since spring when it became clear that the EU sanctions pressure on the Russian Federation for its invasion of Ukraine threatens the supply chain of goods from Asia to Europe and vice versa, and the countries involved in the TITR should take all necessary measures to enhance the activity of this corridor.

TITM Association unites 20 companies,  including railway administrations, ports, shipping and logistics companies from 8 countries. During numerous expert consultations this year, a number of measures were developed to ensure the growth of container traffic along the Middle Corridor (an average monthly growth rate of 50% compared to the corresponding figures for 2021), according to the source in the Ministry of Digital Development and Transport.

In October, pilot transportation of goods along the TITR began using the global transit document (GTrD), which facilitates the resolution of procedural issues.

It also recognized the need for the speedy digitalization of transportation processes and procedures, and the development of multimodal transportation with a high level of involvement and stimulation from the participating states of the route.

In general, the time savings in transporting goods from China to Europe through the Middle Corridor is estimated at 20-25 days (compared to sea shipping).

Since one of the branches of the TITR is the direction of cargo to Turkey,  the talk is about the development of the Baku-Tbilisi-Kars  (BTK) railway route, which was put into operation on October 30, 2017.

Azerbaijan provided Georgia with two preferential loans totaling $775 million for work on the Georgian section of the BTK.

On Monday, during negotiations with Irakli Garibashvili in Tbilisi, the President of Azerbaijan said that “we intend to increase the capacity of the Baku-Tbilisi-Kars railway to 5 million tons per year and invest in it.”

Judging by the dynamics, about 500 thousand tons of cargo can be transported via BTC in 2022.

“In 2022 and 2023, Azerbaijan will make additional investments in this project. All investments are ready, and we have launched this process,” Ilham Aliyev said.

In his opinion, “there is a great need in the world for transport routes passing through the Caspian Sea through Azerbaijan, Georgia and neighboring countries.”

“New transport routes meet the interests of all countries located along them, both in connection with the new geopolitical situation and in general. Therefore, bringing the capacity of the Baku-Tbilisi-Kars railway to 5 million tons and at the same time increasing the volume of goods transported from Central Asia and Asia as a whole in a western direction and back using Georgian ports, creates a new reality,” Aliyev stressed.

“There should be close coordination between Georgia and Azerbaijan in the transport sector. Because our joint projects must be completed at the same time. To be a transit country, it is imperative to have good relations with neighbors… Our friendly, fraternal, partnership relations with Georgia create these opportunities,” the President of Azerbaijan noted.

He added that over the first nine months of this year, the mutual trade turnover approached $1 billion.

“Azerbaijan has invested over $3 billion in Georgia. These are mutually beneficial investments, as they meet the interests of both parties,” Aliyev said.

According to him, a broad exchange of views on the future energy policy took place in Tbilisi.

“We are thinking about new projects… Since there is currently a great need for energy resources all over the world and in Europe, Georgia and Azerbaijan will act as a united front on this issue, ensuring their national interests,” Aliyev said.

He recalled Azerbaijan’s plans to increase gas exports to world markets, and gas is transited through Georgia and Turkey along the Southern Gas Corridor (SGC).

“In 2022, we export 22 billion cubic meters in total (to Georgia, Turkey and Europe), next year exports will increase. The memorandum on strategic partnership in the energy sector, signed between the European Commission and Azerbaijan in July this year, states that in 2027 Azerbaijan will double gas exports to Europe (from 10 to 20 billion cubic meters)… Of course, the upcoming work was discussed in a bilateral format in Tbilisi, there is a need for further discussions,” Aliyev said.

Baku and Tbilisi have begun negotiations on the possible construction of a gas liquefaction terminal on the Black Sea coast, and this new project is being evaluated, according to an informed source.

As for oil cooperation, the President of Azerbaijan noted in Tbilisi that “next year, oil exports will be increased through the Baku-Tbilisi-Ceyhan (BTC) oil pipeline,” which stretches through Georgia to Turkey and has been operating since 2006.

“Along with this, we also want to use the Baku-Supsa oil pipeline, which is currently not in operation. We talked about this too. I informed the Prime Minister of our plans. There is a great need for this and there is great potential for this,” Aliyev said.

A source in SOCAR explained that the talk is about loading BTC with additional volumes of oil from Kazakhstan, about which official Astana and Baku have been actively negotiating since the spring of 2022.

It should be noted that on October 21, the Minister of Energy of Kazakhstan, Bolat Akchulakov, said that Kazakhstan aims to use the Trans-Caspian International Transport Route (TITR) to diversify the export of large volumes of oil from 2024 when production in the country will increase due to the Tengiz field.

“The increase in production at Tengiz is projected at 12 million tons. We will have to give some of these volumes to the so-called diversified routes across the Caspian … It will be necessary to implement a fairly large amount of infrastructure, including not only pipeline transport and berthing facilities, but also an increase the number of tankers in the Caspian that could transport this oil,” the head of the Ministry of Energy of Kazakhstan said last Friday.

In  2008-16 Azerbaijan provided the transit of part of the oil from the Kazakhstani Tengiz field, but since 2017, oil from this large field has been transported through the Russian Federation.

Since 2017, small volumes have been transported through Baku from the Kazakhstani Northern Buzachi field (no more than 100,000 tons per year).

However, taking into account Kazakhstan’s interest in increasing transit volumes in the next 2 years, Azerbaijan is already preparing its infrastructure for these purposes (ports, oil pipeline lintels and even railway tanks).

It is not yet clear how much of the additional Kazakhstani oil can go via BTC, so as not to have a critical impact on the composition of the BTC Blend, and how much Kazakhstan will want to transport by rail to Georgian ports, in particular, to Batumi (the Kazakh company KazTransOil owns “Batumi Oil Terminal” with a transshipment capacity of several million tons).

As for the plans for the Baku-Supsa oil pipeline (operated since 1999 mainly for oil from the Azerbaijani Caspian Chirag field), this Western route has not been operating since the spring of 2022 due to the refusal of foreign tankers to enter the Black Sea and take oil from ports (expensive freight and insurance due to risks amid the Russian-Ukrainian confrontation).

In May, BP as the operator of the oil production at Azeri-Chirag-Guneshli transferred its “Chirag” volumes from Baku-Supsa to BTC (about 90 thousand barrels per day).

“It is possible that the capacity of the idle Baku-Supsa oil pipeline will be offered to such Caspian oil producers as, for example, LUKoil, which has experience in transiting oil from the Filanovsky and Korchagin fields through Baku. Relevant negotiations are underway,” according to an informed source.

Georgia is also interesting for Azerbaijan as a transit country for electricity.

“The new project planned for implementation is related to electricity. Azerbaijan seeks to export its electricity to world markets. Of course, our export route passes through Georgia… Here, Georgia and Azerbaijan, as well as in other areas, will actively cooperate. In short, there are great opportunities to increase the economic potential of our region – energy resources, transport corridors,” the President of Azerbaijan concluded. Aliyev stressed that strategic relations with Georgia have risen to the allied level.

At the final briefing, the Prime Minister of Georgia said that during the talks, the situation in the region and the peace process between Azerbaijan and Armenia were discussed.

“I and the government of Georgia will do everything possible for the policy of peace. Good-natured relations in the region do not contradict any form of cooperation – this will only strengthen them and I am sure that we can do a lot together,” Garibashvili said.

He added that Tbilisi supports the initiative of the President of Azerbaijan on cooperation between the countries of the South Caucasus in a trilateral format, proposed on October 6 in Prague.

On October 6 in  Prague,  within the framework of the European Political Community summit,  Aliyev stated the importance of creating a single platform Azerbaijan-Georgia-Armenia to ensure peace and stability in the South Caucasus. In his opinion, issues of energy, communications and other issues of mutual interest can also be discussed within the framework of such a platform.

Thus, Aliyev’s visit to Georgia on October 24 and the announcement of new multi-billion dollar economic plans there is also a message for neighboring Armenia, which should be interested in establishing normal ties with Azerbaijan and Turkey after signing the Peace Declaration 2 years ago after the Second Karabakh War.