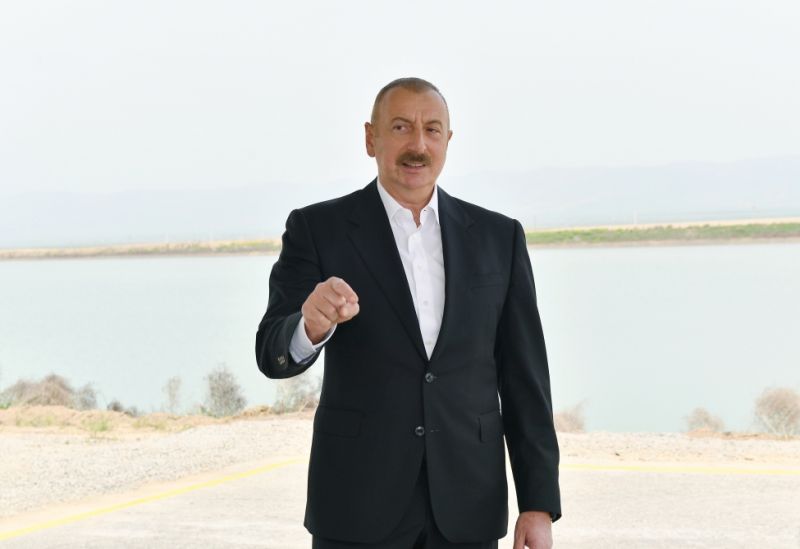 The Ministry of Defense of the Russian Federation responded to the letter from the Azerbaijani military department in connection with the fragments of Russian-made “Iskander-M” missiles found in Shusha. According to Azerbaijan in Focus, reporting Turan News, President Ilham Aliyev announced it in an interview with the state television channel AzTV.

The response states that the Russian side “did not record the launch of ballistic missiles.” In fact, this is not a complete answer to the letter from the Azerbaijani side, Aliyev stressed.

“The main question in our letter was how the deadly “Iskander-M” missiles, prohibited for export, fell into the hands of Armenia? After all, this is impossible. There are two ways here – either through smuggling, or through violation of international norms and rules.

“Armenia could only have export options, “Iskander-E” missiles, and the range of their shot is 280 km. The range of “Iskander-M” missiles is 500 km. That is, Armenia could not have “Iskander-M”. It could only get missiles in two ways. There can be no other way, for other countries do not have such missiles. And to this question (how did the missiles come to be at the disposal of Armenia) an answer must be given,” Aliyev said.

The Azerbaijani people are waiting for an answer, he added. “We have clarified many questions for ourselves. We know when and why they hit, but we must be given an official answer – from Armenia and Russia that fired at us.

These missiles were either provided to Armenia or stolen from Russia by illegal means. There are no answers to these questions. Of course, this is not a good situation. There are strategic partnership relations between Russia and Azerbaijan. With the consent of Azerbaijan, Russian peacekeepers are deployed on our lands – Karabakh, Khankendi and surrounding areas,” Aliyev said. It would seem that the new format of cooperation will strengthen and should strengthen ties.

“However, the discovery of “Iskander-M” missiles in Shusha and the failure to provide us with a full answer justly causes surprise and regret among the Azerbaijani people and leadership. We hope that this issue will be clarified. Relationships between strategic partners must be sincere. Azerbaijan with all strategic partners has always been sincere, always held back and fulfilled its word,” Aliyev said.

He stressed that Azerbaijan will defend its principled position on “Iskander-M” issues. Aliyev pointed to the silence of the Armenian side on the issue of “Iskander-M.”

“Armenia is silent; although we know when and how they fired. We know much more,” Aliyev said.

He also touched upon the “delusional reports” in the Russian media that the “Iskander-M” wreckage was delivered from Syria by Azerbaijan and Turkey. Although these are media reports, they are not accidental, but the result of some systematic approach, the President of Azerbaijan noted.

“These are open accusations against us. Are we being accused of falsification? Who can say that Azerbaijan once committed falsifications? Why do we need it? We are fulfilling the trilateral declaration, we want eternal peace in the region; we are strengthening security measures. Why do we need provocations? Those who accuse us of this must have a conscience,” Aliyev said.

He considers it necessary to investigate the version of the smuggling of “Iskander-M.”

“During the war, large amounts of weapons were smuggled from Russia to Armenia. Azerbaijan informed the Russian side at all levels, at a high level,” Aliyev said. Azerbaijan even informed the international organisation ICAO about all the flights of passenger planes, which delivered weapons to Armenia from Russia, up to the indication of their types.

“We know for sure that the Armenian arms dealer David Galustyan, being in Russia, illegally purchased weapons from the Russian military factories and sent them to Armenia by passenger planes. The money for these weapons was paid by the Armenian oligarchs Abrahamyan and Karapetyan. It is a crime. They should be prosecuted for this. These weapons were delivered to Armenia by various smuggling,” Aliyev said.

In his words, Galustyan was also a business partner of the former Minister of Defense of Armenia David Tonoyan, who was removed from office after being defeated by Azerbaijan. Galustyan is now under arrest in Armenia.

“If the investigation is objective, all the facts I have named will be revealed. We have facts. If necessary, we are ready to publish them,” Aliyev said. He pointed out that Armenian oligarchs Abrahamyan and Karapetyan bought a cargo plane during the war, which transported weapons to Armenia.

“We know a lot. Simply, we will publish some things at the right time. For the first time, we present today’s information to the Azerbaijani public. We have a lot of such information. Therefore, I believe that partners should be sincere with us. For friendship and sincerity must be mutual,” Aliyev said.