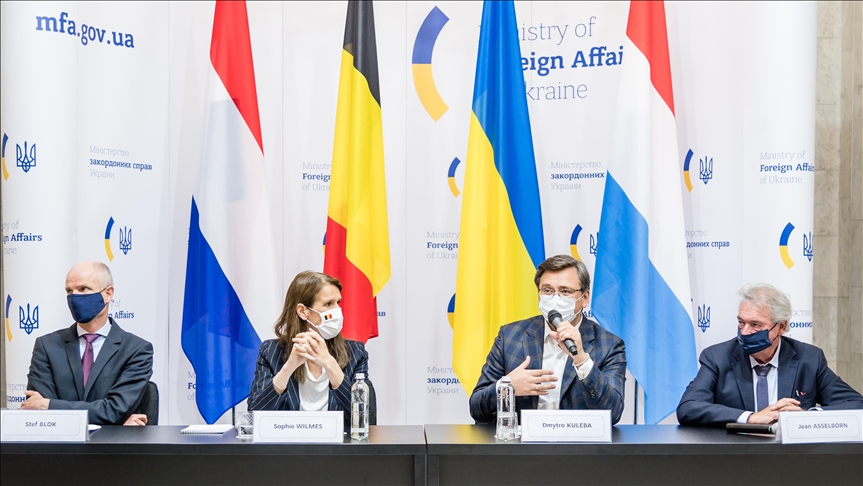 Foreign ministers of Belgium, the Netherlands, and Luxembourg reiterated their support for Ukraine’s sovereignty and territorial integrity.

At a news conference, following a meeting with his counterparts from Belgium Sophie Wilmes, the Netherlands Stef Blok, and Luxembourg Jean Asselborn, Ukrainian Foreign Minister Dmitro Kuleba thanked them for showing solidarity “in the face of the Russian aggression.”

“We discussed the Crimea platform (summit) that will take place. We expect the Netherlands, Belgium, and Luxembourg to take part in it,” Kuleba said, noting that the ministers visited the Lugansk region on Friday and received first-hand information about the situation in Donbas.

“I urge all our partners to put more pressure on Russia to be constructive in the talks,” Kuleba said, adding that the Normandy format still works but Ukraine wants it to be more active.

“As ministers, we read reports, but reading reports and meeting people there (in Donbas) face-to-face is very different, from this point of view, the visit was very useful,” she said.

“Two issues are important. First, the Minsk agreement is the only reliable way to resolve the crisis, and all parties must adhere to it. Second, dialogue should be the only solution. We also welcome the Crimean platform for Crimea to be on the international agenda,” Wilmes said, reiterating Benelux countries’ unwavering support for Ukraine’s internationally recognized borders and territorial integrity.

Asselborn noted that the Benelux countries would continue to support the independence, sovereignty, and territorial integrity of Ukraine.

He voiced concern over the limitation of the mobility of the OSCE (Organization for Security and Cooperation in Europe) Special Monitoring Mission to Ukraine from both confronting sides, adding that the implementation of reforms in Ukraine is important, and the political will in this regard is on the right track.

Asselborn also said the issues of the COVID-19 Vaccines Global Access (COVAX) were discussed at the meeting, and added: “The EU has done a lot on this issue, but it is not enough, we must speed up the process so that the whole world, including Ukraine, can get vaccines.”

“I also appreciate the cooperation of the Ukrainian government in relation to the downed MH-17 plane (in 2014), a tragedy that struck both countries, it is important to keep it on the agenda for the establishment of justice,” Dutch Foreign Minister Blok said, joining the “full support (for) Ukraine’s sovereignty” voiced by other ministers.

This article originally appeared in Anadolu Agency on 08 May 2021.