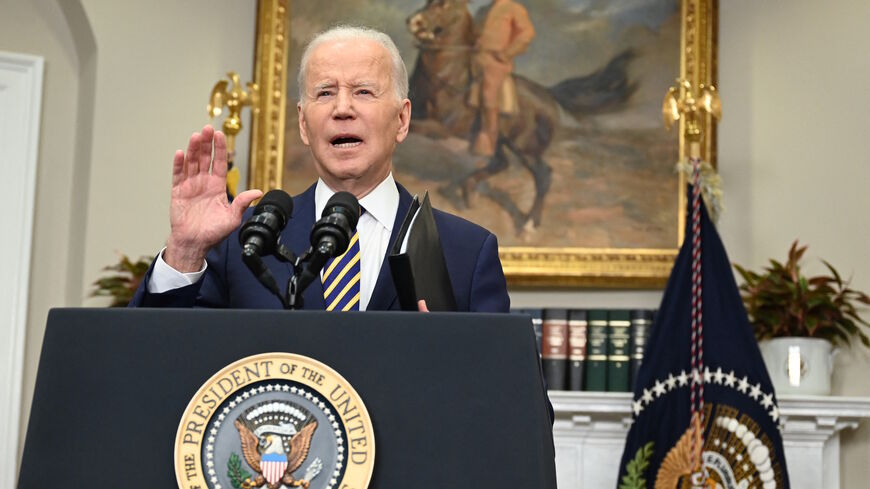 “Today, I am announcing the United States is targeting the main artery of Russia’s economy,” the president said. “We’re banning all imports of Russian oil and gas energy. That means Russian oil will no longer be accepted in U.S. ports, and the American people will deal another powerful blow to Putin’s war machine.”

The ban also applies to Russian coal, sources told CBS News ahead of the announcement. The move comes as gas prices have spiked to all-time highs in the wake of the Russian invasion, despite U.S. efforts to release oil reserves and ramp up supply. Mr. Biden said the decision was made in close consultation with allies and partners in Europe but acknowledged that some allies “may not be in a position to join us.”

The United Kingdom said it would begin phasing out the importation of Russian oil and oil products, with the goal of eliminating them from British markets by the end of 2022. A French official said the European Union, which relies more heavily on Russian energy, is not expected to join the U.S. and the U.K.

In December, Russian oil accounted for less than 5% of total U.S. oil imports, according to the Department of Energy, making the U.S. far less dependent on Russian energy than its European counterparts. Nonetheless, analysts have predicted that banning Russian imports could cause the price of oil to climb to new all-time highs. Mr. Biden said Americans should expect higher prices at the pump as the Russian invasion continues to strain global energy markets.

“The decision today is not without cost here at home,” Mr. Biden said Tuesday. “Putin’s war is already hurting Americans at the gas pump. Since Putin began his military buildup on Ukrainian borders, just since then, the price at the gas pump in America went up 75 cents. And with this action, it’s going to go up further. I’m going to do everything I can to minimize Putin’s price hike here at home.”

Asked by reporters later in the day what he’s going to do about rising gas prices, the president responded he “can’t do much right now” and added the higher prices are “Russia’s fault.”

Ukrainian leaders have pleaded with Washington and the West to cut off Russian energy imports in the 13 days since Russian troops began attacking Ukraine. Lawmakers from both parties have likewise ramped up pressure on the administration to block Russian oil in recent days, preparing legislation to impose the ban if the Biden administration didn’t act.

House Speaker Nancy Pelosi told Democratic colleagues Tuesday morning that the House will move forward with a vote on a bill that would ban Russian oil imports regardless of Mr. Biden’s announcement, a Democratic aide said. The speaker said the White House told her it would announce the ban for days as lawmakers were hashing out legislation, the aide added.

The administration was initially hesitant to take action against Russian energy imports, fearing spikes in energy prices. But top officials recently began signaling a willingness to impose the ban, with White House press secretary Jen Psaki saying Monday that discussions were “ongoing internally and also with our counterparts and partners in Europe and around the world.”

“Thankful for US and @POTUS personal leadership in striking in the heart of Putin’s war machine and banning oil, gas, and coal from US market,” he wrote on Twitter. “Encourage other countries and leaders to follow.”

The U.S. and its allies have imposed punishing sanctions against Russia since the invasion, taking aim at the country’s financial system and Russian elites, including Putin himself.

This report originally appeared on CBS News on 8 March 2022.