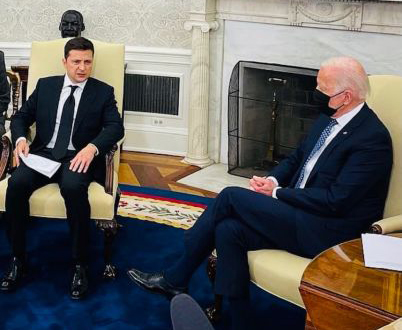 U.S. President Joe Biden on Wednesday reassured his Ukrainian counterpart of Washington’s ironclad commitment to Ukraine’s sovereignty and opposition to Russian aggression, according to Azerbaijan in Focus, reporting Turan News.

“Thirty years after the restoration of Ukraine’s independence, the bonds between the United States and Ukraine are stronger than ever,” the White House announced in a joint statement on the U.S.-Ukraine Strategic Partnership.

“Our relationship serves as a cornerstone for security, democracy, and human rights in Ukraine and the broader region. We are committed to Ukraine’s implementation of the deep and comprehensive reforms necessary to fulfill its European and Euro-Atlantic aspirations.” reads the statement. “We are also united in our commitment to Ukraine’s sovereignty and territorial integrity in the face of continued Russian aggression”

Biden’s meeting with President Zelenskyy came amid rising tensions between Washington and Kyiv over the U.S approach to Russia, with Ukrainian officials concerned the White House had been too accommodating towards the Kremlin.

Zelenskyy arrived at the White House on Wednesday afternoon at 1:58 PM, local time, in a black SUV. When the pool entered the Oval Office 7 minutes later, he and President Biden were seated in chairs near the fireplace.

After Biden’a brief remarks, Zelenskyy spoke in Ukrainian. “The United States is our strategic partner and supporter of our sovereignty, and our territorial integrity” – he said, thanking his counterpart for sending more than 2 million vaccines to Ukraine and for additional 60 million dollars in military assistance.

Zelenskyy also mentioned that they would talk about the “situation in Donbas and Ukrainian Crimea occupied by the Russian Federation, as well as security in the Black Sea, and security in the Azov Sea region”.

The bilateral meeting between the two delegations concluded at 4:12 PM and Zelenskyy departed the White House 5 minutes later. He waved and nodded through the window to a small group of reporters witnessing his departure from the stakeout location.

This was a long time coming for the Ukrainian leader, as it was his first in-person engagement with President Biden, albeit they had already spoken twice by phone – in April and in June. The second phone call took place before the Biden-Putin summit in Geneva.

From the White House’s perspective, this was the first trip by a Ukrainian leader in more than 4 years. Former President Petro Poroshenko was a guest of Donald Trump in the Oval Office in June 2017. Zelenskyy too met Trump on the sidelines of the UN summit in New York in September 2019 following the controversial “do us a favor” phone call, which led to Trump’s first impeachment. “Thank you for the invitation to Washington… You invited me… but you forgot to tell me the date” – Zelenskyy had been quoted as saying back then.

After departing the White House on Wednesday, the Ukrainian leader flew to California to meet with tech CEO’s. Later in the day, the State Department, together with Ukraine’s Ministry of Foreign Affairs, announced the entry into force of the latest extension of the Science and Technology Agreement between the two governments. The agreement reinforces the continued collaboration between our countries and prioritizes current and future science and technology cooperation.