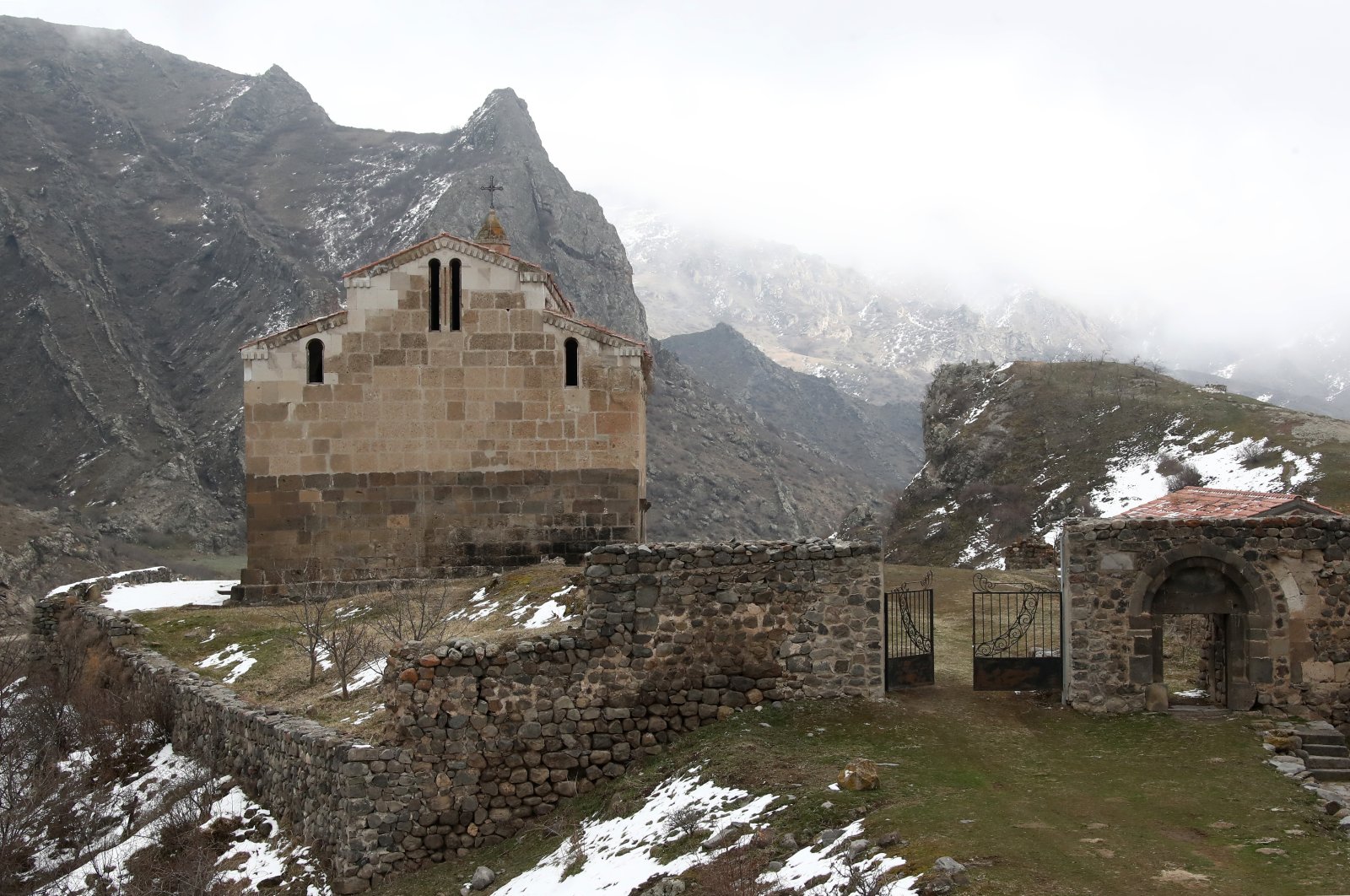 A view of the Ağaoğlan Monastery in Lachin District, Azerbaijan, Feb. 24, 2021 (Getty Images)

As countries in the Caucasus eye cooperation and enhanced trade routes following the Nagorno-Karabakh conflict, Biden’s recognition of the 1915 events as a ‘genocide’ might have impeded this outcome, experts say.

New balances took shape in the Caucasus after Azerbaijan recently took back Armenian occupied territories in Nagorno-Karabakh, paving the way for regional stability, development and the reopening of transport links. Yet, as future cooperation between regional countries loomed, experts say that U.S. President Joe Biden’s statement recognizing the 1915 events as a “genocide” hampered the process.

“By locking in Turkey-Armenia relations around the 1915 events, it tried to hinder an atmosphere of peace in the Caucasus. Neither France nor the U.S. as the co-chairs of the Minsk Group were satisfied with the developments in the region. Therefore the U.S. refreshed the 1915 events to prevent possible normalization between Turkey and Armenia as well as regional peace,” Tutku Dilaver, an analyst at Center for Eurasian Studies (AVIM), told Daily Sabah.

Ankara and Yerevan did not establish formal diplomatic ties after Armenia declared independence in 1991. In 1993, Turkey closed its border with Armenia in response to the Armenian aggression in Karabakh.

Fresh clashes took place last year between former Soviet republics Armenia and Azerbaijan. Six weeks of fighting was brought to a close with a Russian-brokered cease-fire in November that saw Azerbaijan reclaim much of Nagorno-Karabakh along with surrounding areas that Armenia occupied during the 1990s war.

The Russia-brokered peace deal envisaged the reopening of transport routes, including a corridor linking Azerbaijan and its Nakhchivan exclave that borders Armenia, Turkey and Iran. Armenia, in turn, would be able to use transit routes to Russia and Iran via Azerbaijan’s territory.

The peace agreement, which was celebrated in Azerbaijan as a major triumph, sparked outrage and mass protests in Armenia, where thousands repeatedly took to the streets demanding then-Prime Minister Nikol Pashinian’s resignation.

Dilaver explained that in this new equation in the Caucasus where actors eyed further regional cooperation, the April 24 statement of Biden was a mishap. She reiterated that one of the issues of disagreement between Yerevan and Ankara was both countries’ contradictory theses of the 1915 events. Biden’s move aimed to increase the pressure on Armenia, Dilaver continued, indicating the significance the diaspora constitutes for Armenia’s economy.

Conversely, Fuad Shahbaz, a Baku-based senior analyst, stated that while Biden’s words will not have a long-term effect on relations, they will “increase the Pashinian government’s image and give additional means to put pressure on his opponents.”

I expect some positive outcomes on the Nakhchivan corridor and on the Armenia, Turkey, Azerbaijan cooperation format very soon, Shahbaz told Daily Sabah.

Turkey has become a vital actor in the South Caucasus, especially during its support for Azerbaijan and through the coordination of a joint observation center with Russia, which will supervise the recent cease-fire agreement.

Now, work is underway to clear the retaken territories of land mines, repair infrastructure destroyed in the fighting and work on transit routes for the region that have been paralyzed for nearly three decades amid a conflict.

With the opening of new transportation lines, the rebuilding of liberated cities and the restoration of historical monuments, Azerbaijan intends to transform the region into an economic and tourism hub.

Meeting two months after a cease-fire was declared for the Caucasus’ Nagorno-Karabakh region, the leaders of Russia, Azerbaijan and Armenia signed a pact to develop economic ties and infrastructure to benefit the entire region.

In a move to enhance cooperation and develop transportation routes that would benefit all countries in the region, Turkey has several times called on Armenia to be collaborative.

Turkish President Recep Tayyip Erdoğan last December underlined that a six-country regional cooperation platform, including Russia, Turkey, Azerbaijan, Iran and Georgia, as well as Armenia, would be a win-win initiative for all regional actors in the Caucasus.

“The six-country platform is an enterprise that will provide a win-win opportunity for everyone. If Armenia joins this process and takes positive steps, Turkey-Armenia relations can have a new turn,” said Erdoğan. “Undoubtedly, Armenia’s gains will increase considerably as new opportunities emerge.”

In March, Erdoğan repeated his call saying, “We hope that Armenia will be a part of regional stability with the peaceful steps that it will take.” Turkish Foreign Minister Mevlüt Çavuşoğlu also highlighted that enhanced relations between Yerevan and Baku would positively affect relations between Turkey and Armenia as well. He added that stability in the region would also benefit Armenia and the Armenian people as Turkey envisages inclusive cooperation and prosperity for the region.

As for cooperation between the three countries, much depends on the results of the upcoming snap elections in Armenia, Shahbaz pointed out. “If Pashinian wins one more time we should expect some pragmatic steps by him. After a decisive defeat on the battlefield, Armenia needs at least economic dividends to revive its economy, and the regional cooperation format perfectly matches this ambition,” he highlighted.

Armenian Prime Minister Nikol Pashinian, who was swept to power in pro-democracy protests in 2018, resigned last month, a day after Biden’s statements, to run in an early election after facing criticism over his handling of last year’s conflict in Nagorno-Karabakh. A new election is set for June 20.

“Pashinian is eager to cooperate with Baku and Ankara but not at the cost of domestic ratings. If successful in June, he would make some positive steps/statements towards the format to ease the domestic dissatisfaction in Armenia and open regional routes,” Shahbaz said.

Dilaver similarly stated that “a government to replace Pashinian following Biden’s April 24 statement might not be keen on cooperation with Turkey” due to the Armenian diaspora’s stance and nationalists within the country.

“Even with Pashinian in the office, the normalization of relations with Turkey remains a far possibility,” she said, giving the example of Armenia embargoing Turkish products since the Nagorno-Karabakh conflict, which was extended two times. “It seems that the Pashinian administration might be forced to continue such practices because of voter pressure.”

Saying that another point of clashes between Yerevan and Ankara is the former’s territorial claim of Turkish lands as well as compensation for the 1915 events, Dilaver stated that Biden’s statement encouraged Armenian nationalists hoping for land and compensation.

“Even the enthusiasm regarding Turkey’s territorial integrity would bring bilateral relations to a new low,” she said.

“While normalization seems distant, the policies third countries follow in this regard is also not helping, and are even harming relations as can be seen.”

Tensions between the two NATO allies rose when Biden called the events of 1915 “genocide,” breaking the long tradition of American presidents refraining from using the term.

Turkey’s position on the 1915 events is that the death of Armenians in eastern Anatolia took place when some sided with invading Russians and revolted against Ottoman forces. A subsequent relocation of Armenians resulted in numerous casualties that were further exacerbated by massacres committed by militaries and militia groups on both sides.

Turkey objects to the presentation of the incidents as “genocide” but describes the 1915 events as a tragedy in which both sides suffered casualties.

This article originally appeared in DAILY SABAH on 16 May 2021.