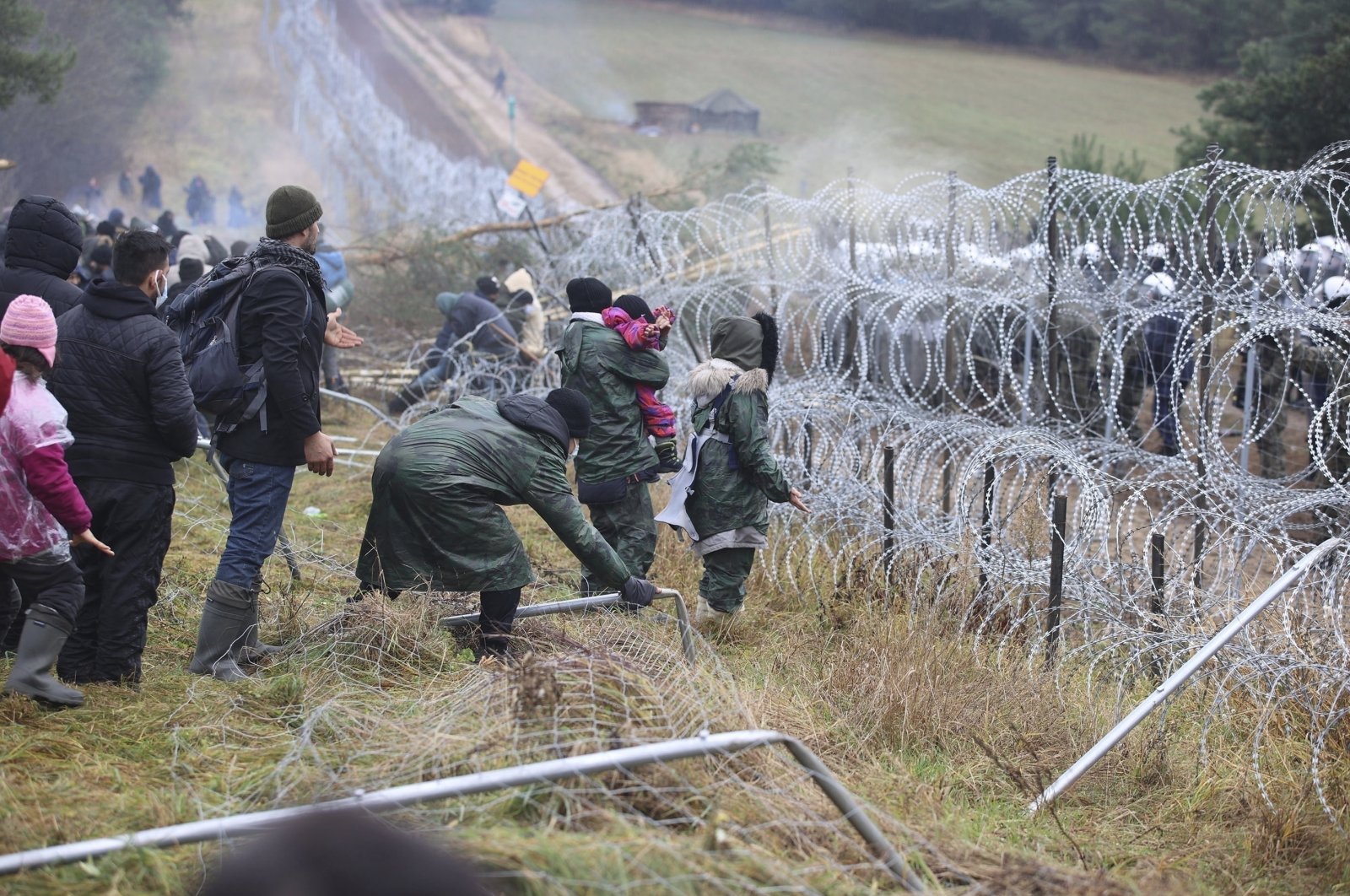 Migrants break down the fence as they gather at the Belarus-Poland border near Grodno, Belarus, Nov. 8, 2021. (AP Photo)

Blaming Turkey or its national airline for the humanitarian crisis at the Polish border with Belarus is “misguided,” Turkey’s Presidential Spokesperson Ibrahim Kalın said Saturday.

Ankara on Friday banned citizens of three Middle Eastern countries from flying from Turkish airports to the former Soviet republic because of “the problem of illegal border crossings between the European Union and Belarus.”

Turkish Airlines (THY) provides one of the most heavily used international links to the Belarusian capital Minsk.

Kalın said accusations that Turkey somehow contributed to the border crisis were unjust.

“This recent crisis of illegal migrants between Belarus, Poland, Lithuania and a few other European countries, in fact, has nothing to do with Turkey,” he said in an exclusive interview with the Agency France-Presse (AFP).

“Travelers are going to Belarus and from there to Lithuania, Poland and other EU countries. Blaming Turkey for that, or Turkish Airlines, is simply so misguided, misplaced,” he said.

Turkey’s announcement was met with relief by European officials at a time of lingering strains in Ankara’s relations with Brussels.

“Thank you to the Turkish authorities and (civil aviation agency) for your support and cooperation,” European Council President Charles Michel tweeted.

Kalın said Turkey made its decision after intense consultations with Polish and other European officials.

“Look, we do not want to see any human being from any country to be used as a bargaining chip or as subject of human trafficking, or in some kind of political crisis between countries,” he said.

But he added that Foreign Minister Mevlüt Çavuşoğlu “made it very clear to his counterparts in Poland, Lithuania and as well as Belarus that, you know, we do not carry any responsibility.”

Turkey is home to up to five million refugees and migrants – most of them from war-scarred Syria – and remains one of the preferred routes for migrants and refugees to enter Europe.

The number of migrants passing through Turkey has ticked back up after falling off sharply in the first year of the coronavirus pandemic.

“The numbers vary, of course, they have increased in the last few months,” Kalın said.

“We want to make sure that those who travel, that they travel with two-way tickets. That they come back. But if there are any people who get lost in Belarus again, that’s not our responsibility,” he stressed.

Turkey will no longer allow citizens from Syria, Yemen and Iraq to buy flight tickets from the country to Minsk amid a migrant standoff between Belarus and the EU, Turkey’s Civil Aviation General Directorate (SHGM) said on Friday.

“In relation to the illegal border crossing problem between the European Union and Belarus, it has been decided for citizens from Iraq, Syria and Yemen wanting to travel to Belarus from our country’s airports not to be sold tickets and not to be allowed on planes,” the SHGM said on Twitter.

Belarusian state-owned airline Belavia also announced Friday that it will no longer allow citizens of Iraq, Syria and Yemen to board flights from Turkey at the request of Turkish authorities.

“In line with a decision by the … Turkish authorities, citizens of Iraq, Syria, Yemen will not be accepted for transportation on flights from Turkey to Belarus from 12.11.2021,” it said in a statement on its website.

This article originally appeared in DAILY SABAH on 14 Nov 2021.