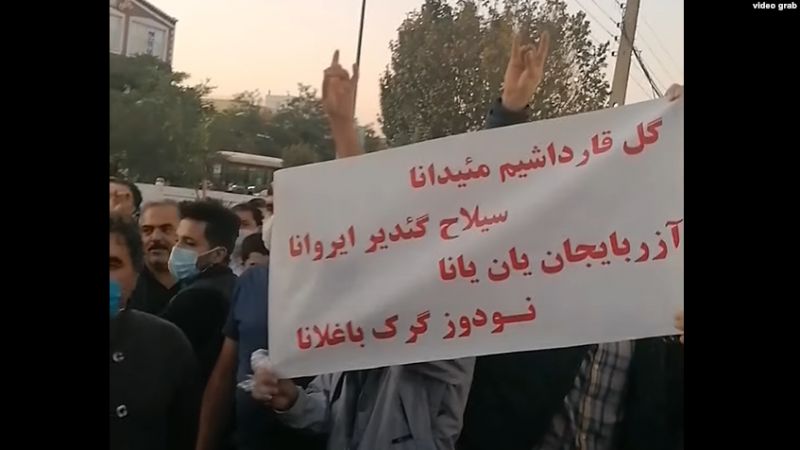 Brave Iranian Azerbaijanis Support Their Brothers in the Republic

Rallies demonstrating solidarity with the Azerbaijani Armed Forces, who are fighting against Armenia for the liberation of Nagorno-Karabakh and the seven surrounding regions, have been held in Iranian (South) Azerbaijan and other Iranian regions.

On October 18, a large rally took place in Tabriz, the capital of the region, and continued into the night, despite heavy police pressure. The participants demanded the closure of the Nurduz checkpoint between Iran and Armenia, conduit to the supply of weapons to Yerevan through Iran.

According to social networks, the protesters chanted such slogans as: “Karabakh is ours, and will be ours!”, “Protecting Armenia is a crime!” and “Tabriz, Baku, and Ankara – long live Turan!” etc.

The Voice of America Azerbaijani Service reported on 17–18 October that many activists who called for action in support of Karabakh were taken into custody by the Iranian security forces and some citizens were subsequently detained during the rallies. According to human rights activists, those detained in Tabriz, Meshginsheher and Mugan included Rasul Razavi, Akper Muhadjiri, Huseyn Muhammedian, Rza Zarei, Aydin Zakiri, Iffet Nikbekht and Rza Seyidnuri. Since September 29, around 200 activists have been detained in various Iranian regions.

On October 18, dozens of Iranian Azerbaijanis on the banks of the Araz border river enthusiastically greeted the soldiers of the Azerbaijani army who took control of the historic Khudaferin Bridge and the reservoir of the same name.

This article originally appeared in Turan Informasya Agentliyi on 19 Oct 2020.