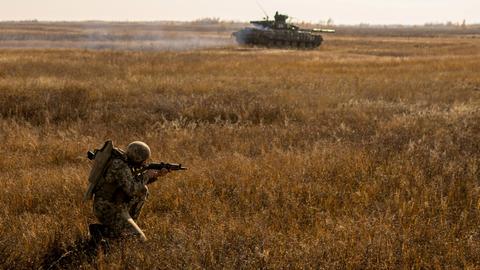 Can Turkey balance Russia in Ukraine?

After recent tensions between Ukraine and Russia, some analysts have argued that Turkey should spearhead efforts to counter Russian aggression in Ukraine. While these discussions are based on Turkey’s recent military victories against Russia, analysts need to take into account the attitude of NATO states towards Ankara vis-à-vis its confrontations with Moscow.

Because of negative experiences concerning the (dis)loyalty of NATO states during various confrontations with Russia, Turkey will avoid being the only state taking action on behalf of the alliance. Only by implementing a multi-layered alliance strategy to block Russia in Ukraine will Turkey take a part in the conflict. Until then, one should expect Turkey to aid and support Ukraine within the framework of its national interests and strategic partnership with that country rather than being used as a tool by other states.

In recent years, Turkey has achieved several tactical and strategic victories against Russia. In Syria, Turkey prevented Russia from implementing a military solution. It also protected civilians by dealing a devastating blow to the army of the Assad regime and allied Iranian militias. In Libya, Turkish drones destroyed Russian air defense systems, turning the tide of war in favour of the Libyan government. In Nagorno-Karabakh, Turkish drones and Turkish strategic aid to Azerbaijan dealt a deadly blow to the Armenian army. After these victories, Moscow got worried when Ankara started exporting its model of intervening against Russia without the aid of the US. Beyond military affairs, the Turkey-Ukraine partnership holds the key to Black Sea security.

The Turkish model could be of significant value in the event of a possible Russian attack against Ukraine, which likely would not be a conventional conflict but hybrid warfare including paramilitaries and “little green men.” If Turkey were to provide Ukraine with electronic warfare systems, new drones like the Akinci, and Turkish strategic aid like it provided to Azerbaijan, it would be a game-changer.

However, the recent history of military victories in Turkey and the exporting of its engagement strategy being exported to NATO states does not necessarily mean that Turkey will accept the role of spearheading efforts to counter Russia in Ukraine.

In reality, the Turkish position closely mirrors the story of the witty and philosophical folk hero, Nasreddin Hodja. One day, a king gives the farmers of a village an elephant. However, the costs of providing for the elephant are too high and the farmers beseech Nasreddin Hodja to ask the king for relief on their behalf. Hodja agrees on the condition that all the farmers go with him to the palace. Arriving before the king, Nasreddin Hodja glances behind him only to see that the farmers are not there. Despite the betrayal, Hodja thanks the king in the name of the village farmers for his generous gift of one elephant. Hodja then requests the king send a second one.

Similarly, Turkey was repeatedly abandoned by allies during confrontations with Russia. In 2015, when Russia and Syrian regime forces attacked the province of Latakia where many Syrian Turkmen resided, NATO allies took no action to stop the displacement of thousands of Turkmen. Neither did they offer help when the Turkish air force shot down a Russian fighter jet that violated Turkish airspace. After the incident, Turkey called an extraordinary meeting of NATO and consulted its allies on the situation.

To the surprise of Ankara, NATO allies showed a lack of willingness to support it. The Patriot missile-defense systems that had been deployed to Turkey were withdrawn by NATO countries (except Spain). Just a year after the illegal annexation of Crimea, NATO left Turkey alone against Russia.

The lack of support did not stop there. In February 2020, 34 Turkish soldiers who were deployed to Idlib to protect Syrian civilians were killed by an Assad regime airstrike. Some suggested that Russia was responsible for the attack, including then-US Secretary of State, Mike Pompeo. After the attack, Turkey, once again consulted its NATO allies and offered them a list of demands. Unfortunately, most were rejected.

Also, in Libya, Turkey aided the government in their fight against warlord Khalifa Haftar. Yet it turned out that NATO ally France was on the same side as the warlord. Furthermore, in Nagorno-Karabakh, where Turkish military aid to the Azerbaijani army decimated the Russian military equipment possessed by Armenia, it was France and the US Senate that opposed Turkey’s role in the conflict.

Last but not least, in Syria, US CENTCOM officials handed over their Manbij base to Russia in 2019. This was done to prevent a further incursion by the Turkish Armed Forces and the Syrian National Army during their operation to liberate the town of Manbij from the YPG/PKK terror group. Recently, the US military also opened its airspace to Russia in Syria’s northeast region to prevent a new military operation against the YPG/PKK.

The rhetoric coming from NATO states has also been clear. When French president Emmanuel Macron claimed that NATO was brain dead, he made his point by questioning whether NATO states would support Ankara if Turkish soldiers are attacked inside Syria or outside of Turkish territory.

NATO’s position has also been clear on the technical side of things. Turkey’s strategy of limited engagement with Russia primarily relies on drones. However, some US Senators that supported the CAATSA law after the illegal annexation of Crimea labelled Turkish drones as a “threat” and demanded actions against them. It’s as if the senators were working for Russia.

One could even go so far as to say that Turkey has successfully limited Russia not only without the support of NATO states, but despite it.

Until now, Turkey has both limited Russia and been able to maintain a diplomatic relationship with it. Today, Turkey is more than capable of helping Ukraine defend itself against Russia, but no one should expect Turkey to do so as a principle matter of policy.

Turkey will join a multi-layered NATO strategy to protect Ukraine against Russia, should one come to fruition. As there is currently neither a vision for this nor a willingness in the west to recognise Turkey’s efforts, Ankara will continue adhering to the unwritten rules governing Turkish-Russian brinkmanship.

This article originally appeared in TRT WORLD on 26 Nov 2021.