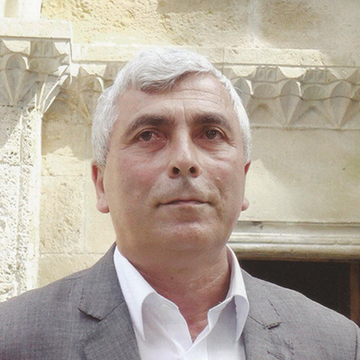 Caucasian Albanians: The True Owners of the Dadivank Monastery

The liberation of Azerbaijani lands from nearly three decades of Armenian occupation has provided evidence of Armenian vandalism, according to ‘Azerbaijan in Focus’, reporting Vestnik Kavkaza. The comments were made by Robert Mobili, Head of the Udi Christian Community of Azerbaijan, speaking about the Armenian destruction of Caucasian Albanian monuments during the occupation.

Vestnik Kavkaza (VK): The illegal Armenian occupiers in the regions surrounding Nagorno-Karabakh have systematically destroyed Azerbaijani historical monuments, particularly those featuring Caucasian Albanian architecture. What are your thoughts on this policy?

Robert Mobili: To begin with, on behalf of the Caucasian Albanian–Udi Christian community, I would like to congratulate the people of Azerbaijan on the liberation of their territories. The foremost section of the Albanian Christian population remained in the Caucasus, and in the Kelbajar region alone there are more than 35 Albanian monuments. The Caucasian Albanian Apostolic Church has left a deep historical mark in these places, and Christians account for a significant proportion of the population.

The Albanian Apostolic Autocephalous Church is one of the oldest Eastern churches, which has a direct connection with Jerusalem. This is a special branch, and we are talking about autocephaly, since the ordination was independent. One of the apostles of this church was Bartholomew.

Contemporary Azerbaijan is the heir to historical Caucasian Albania. Monuments dating back to the fourth, fifth, sixth, ninth and twelfth centuries A.D. have survived and Karabakh occupies a special place for us.

The mother of Eastern churches in the Caucasus is the Kish Church in Karabakh, the Gandzasar Cathedral and the Khudavenk (Dadivank) monastery complex – the pearl of the Caucasian Albanian church. Three Albanian Catholicos Patriarchs are buried there.

Unfortunately, today in the territories of the ancient Caucasian Albanian kingdom – modern Azerbaijan – we have witnessed evidence of vandalism since the liberation. The Armenian population, which considers itself to be an ancient Christian civilisation, has barbarously broken symbols and crosses and destroyed architectural monuments. In violation of the Ten Commandments in Christianity, they kill and steal.

It’s sad to see such a picture, especially considering that tomorrow these barbarians will shout to the whole world that Muslims are destroying Armenian churches.

Dear colleagues and Christian brethren, please understand that conditions have been created in Azerbaijan to support all religions.

VK: Is the heritage of the Caucasian Albanian state protected in Azerbaijan?

RM: Despite the Second Karabakh War and the Covid-19 pandemic in Azerbaijan, the church has been supported. Financial assistance was provided by the state and the Heydar Aliyev Foundation, and representatives of many different peoples, nations and religions – Lezgins, Tats and Avars – assisted with this. This is Azerbaijani reality. As a representative of the ancient Christian Albanian Church, I can say with confidence that excellent conditions have been created in Azerbaijan in this regard.

The Azerbaijani people are tolerant. The country has created a multicultural environment, where Muslims, Christians and Jews support each other. There is a synagogue, an Orthodox church and Catholic church, but the most powerful layer of Christianity in Azerbaijan originates from the Caucasian Albanian kingdom.

VK: In recent years, historians have determined that there has been systematic Armenisation of Caucasian Albanian monuments. How is this regarded by the Udis, the ancient descendants of the Caucasian Albanians?

RM: The Armenian population, who are now fleeing the occupied territories, artificially created the ground for falsification, deliberately erasing the legacy of the Caucasian Albanian churches, in order to present them later as Armenian. Once again I wish to reiterate that the Caucasian Albanian Apostolic Church has nothing to do with the Armenian Church. This has a separate apostolic line.

I cannot find the words to describe the barbarity of the Armenian community and those people who are taking away relics from the Khudavang Monastery. The word ‘Khudavang’ translates as ‘God’s house’. You can break an agreement, you can fight, but destruction of God’s house is unimaginable. The actions of the Armenians in Karabakh represent sheer barbarity. We are all human. Why destroy historical and cultural monuments?

When the hostilities stopped, the first comment by Azerbaijani President Ilham Aliyev was that we would restore the Caucasian Albanian temples and Christian heritage in the liberated territories of Karabakh. These are not mere words.

A new Catholic church is being built in Azerbaijan today, Russian Orthodox churches in Baku and Ganja are being restored, and ancient Caucasian Albanian churches are being restored. When historians, theologians, religious scholars come to us, they are amazed at what they see. We have churches dating from the 4th–5th centuries, not only in the Lesser Caucasus, but also on the southern slopes of the Greater Caucasus, in Sheki, Zagatala, Belokana, Gabala, the Gazakh and Tovuz regions. This is the foremost region for the religion, preserved after Caucasian Albanian King Urnayr was baptised in 313, simultaneously with granting legal status for the religion in the Roman Empire.

This says a lot. If a nation in the 6th century already had its own Bible in its native language, then this is very strong. This means that Caucasian Albania played a significant role in the region. In the 6th century, not every country could afford to translate a Bible in its own language. This shows that Christianity has left a deep mark on the territory of Azerbaijan.

Today, international science is closely studying the history of ancient Greece, Rome and Egypt, but the ancient history of Azerbaijan does not receive due attention. This is partly why we are faced today with the falsification of our history.

It is a great pity that Christians are removing or eradicating the ancient Caucasian Albanian elements of history, including gravestones and petroglyphs, from Karabakh. Many Caucasian Albanian churches in Nagorno-Karabakh were converted to look as if they are Armenian, especially the altars and symbols. However, we will restore their historical appearance.

It should be borne in mind that the Armenian Gregorian Church was declared apostolic only after the Soviet collapse, when Armenia gained independence. Now they are trying to erase the history of another people, appropriating it for themselves, and want to show the whole world that the Caucasian Albanian churches are supposedly Armenian shrines. However, everyone knows that the toponym ‘Armenia’ is purely geographical. The Armenian people call themselves Hays. There are two strong components in Armenia – the Hayev Armenia and the Armenian Church. This is an indicator of mono-ethnicity and mono-confessionalism. To become a representative of this church, one must be Armenian.

VK: What was the further fate of the religious rituals of the Udis after the Armenians took over the Albanian Church?

RM: In small towns, the Udis abandoned the church and prayed at home. This enabled them to preserve their culture, traditions, cuisine, folklore and, most importantly, language. All representatives of my ethnic group speak their native language and study the Udi language in schools. We operate five schools, three of which are Russian and two are Azerbaijani. We have a free choice of school. In fact, the Udis were trilingual and today they have already become quadralingual – many speak English. The conditions created for the Udis in Azerbaijan are excellent.

When the status of the Caucasian Albanian Church is fully restored, we will raise awareness of this and present a model of coexistence between the Armenian community and ourselves.

We used to live together with the Armenians. In principle, the Caucasian Albanian churches, and Albanian-Christian heritage have been in captivity, not for 30 years, but for more than 200 years, because in our native churches there was no flock, no service in that language, and the church is founded on this. We will restore historical justice, which will give an impetus to restore the status of the Caucasian Albanian Church.

VK: Is it possible to restore this?

RM: This is the only Christian church that has not yet been restored. The Syrian Church, in Jerusalem, Antioch Church, Ethiopian Church and Coptic Church are close to the Caucasian Albanian Church. We currently have excellent conditions for reconstruction, with state support and that of President Ilham Aliyev personally and support from the Islamic world.

I would like to thank the Caucasian Muslims Office, which is interested in restoring the status of the Caucasian Albanian Church, and also to note the support of the Russian Orthodox Church and the Catholic world.

We especially feel the support of Eastern Christians, because this is the world close to us – the Jerusalem Church. Despite the fact that there are few of us – around 10,000 – the Udis are ready to restore the Caucasian Albanian Church.

VK: How do you assess the Azerbaijani model of multiculturalism?

RM: We have a small territory at the church in the village of Kish, where the Udis now live. There are also three churches and three mosques. In the morning you can hear the azan, and at 12 o’clock the church bell rings. This is a special region where Azerbaijanis and Udis live together. This is the Azerbaijani model of multiculturalism.

A small historical detail: when the Communists came to power, their representative decided to remove the cross from the church of St. Elisha. No-one provided any assistance, and he had to do everything himself, with the assistance of two horses. He removed it, and two days later died under a tram in Baku. The Church of St. Elisha, the oldest church on Udi territory, was restored in 2006.

The second case is related to the Church of the Most Holy Theotokos Mary. An enthusiast tried to remove the cross, but a few weeks later lost his mind and died.

This article originally appeared in Vestikavkaza on 21 Oct 2020.