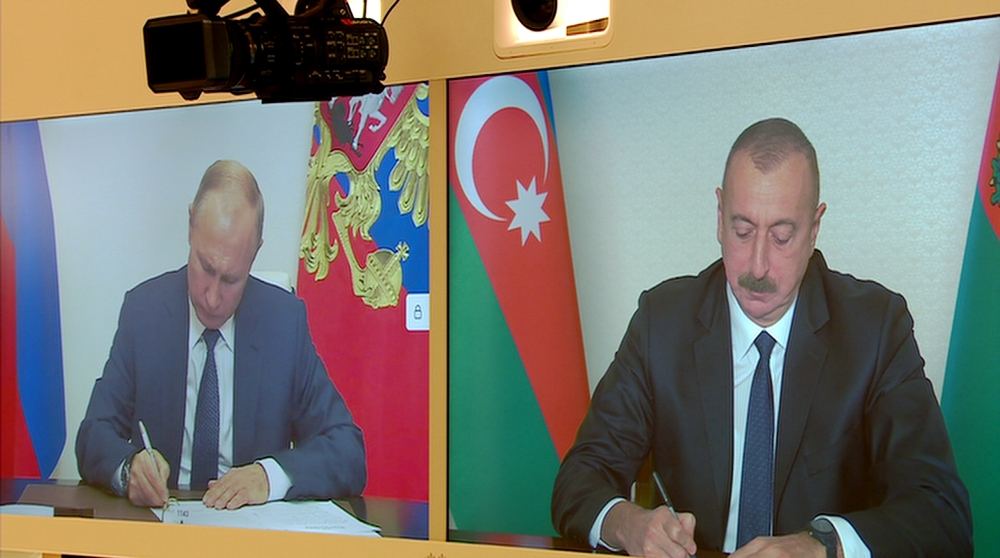 1. A complete ceasefire and a cessation of all hostilities in the zone of the Nagorno-Karabakh conflict shall be introduced at 00:00 hours Moscow time on 10 November 2020. The Republic of Azerbaijan and the Republic of Armenia, hereinafter referred to as the Parties, shall stop at their current positions.

2. The Aghdam district and the territories held by the Armenian Party in the Gazakh district of the Republic of Azerbaijan shall be returned to the Azerbaijan Party before 20 November 2020.

3. Along the ‘contact line’ in Nagorno-Karabakh and along the Lachin corridor, a peacekeeping contingent of the Russian Federation shall be deployed in the amount of 1,960 military personnel with small arms, 90 armoured personnel carriers and 380 units of automobile and special equipment.

5. In order to increase the effectiveness of control over the implementation of the agreements by the Parties to the conflict, a peacekeeping centre shall be deployed to exercise control over the ceasefire.

6. The Republic of Armenia shall return the Kalbajar district to the Republic of Azerbaijan before 15 November 2020 and Lachin district before 1 December 2020, while retaining the Lachin Corridor (5km wide), which shall provide a connection between Nagorno-Karabakh with Armenia and shall not affect the city of Shusha.

By agreement of the Parties, a plan for the construction of a new route along the Lachin Corridor shall be determined in the next three years, providing communication between Nagorno-Karabakh and Armenia, with subsequent redeployment of the Russian peacekeeping contingent to protect this route. The Republic of Azerbaijan shall guarantee the safety of citizens, vehicles and goods travelling along the Lachin corridor in both directions.

7. Internally displaced persons and refugees shall return to the territory of Nagorno-Karabakh and adjacent districts under the control of the United Nations High Commissioner for Refugees.

8. The exchange of prisoners of war and other detainees and bodies of the dead shall be carried out.

9. All economic and transport links in the region shall be unblocked. The Republic of Armenia shall provide for transport communication between the western regions of the Republic of Azerbaijan and the Nakhchivan Autonomous Republic in order to organise unhindered movement of citizens, vehicles and goods in both directions. Control over transport shall be exercised by the bodies of the Border Guard Service of the Federal Security Service (FSB) of Russia.

By agreement of the Parties, the construction of new transport communications linking the Nakhchivan Autonomous Republic with the western regions of Azerbaijan shall be provided.

President of the Republic of Azerbaijan

Prime Minister of the Republic of Armenia

President of the Russian Federation