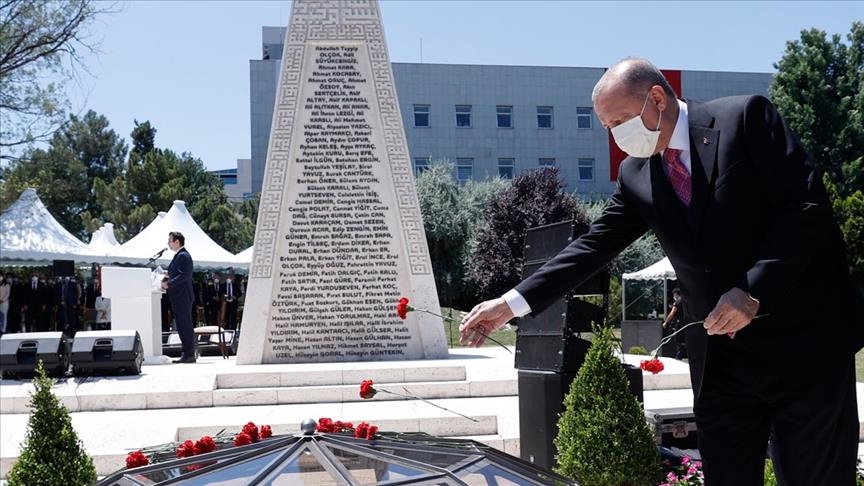 It is a 'victory of Turkish nation, of national will, of those who set their heart on democracy,’ Erdogan says

The repulse of 2016 coup attempt in Turkey is “a common source of pride” for the nation, the country’s president said on Thursday, marking the fifth anniversary of the defeated coup.

“The epic of July 15 is a common source of pride for all of us. The July 15; it is the victory of the nation, of the national will, of those who set their heart on democracy,” Recep Tayyip Erdogan told a commemorative ceremony in parliament.

The Turkish leader said that no one has the right to downplay the glorious struggle of the nation on the night of the attempted coup by the Fetullah Terrorist Organization (FETO).

July 15, the day of the defeated coup, is now marked in Turkey as Democracy and National Unity Day, with commemorations set to be held across Turkey on Thursday.

Erdogan said that the July 15 was the day when justice won against oppression and the freedom against belittlement.

“The martyrs of July 15 are today’s representatives of the struggle for right against vanity, oppression and blasphemy,” he added.

FETO and its US-based leader Fetullah Gulen orchestrated the defeated coup of July 15, 2016, in which 251 people were killed and 2,734 injured.

Ankara also accuses FETO of being behind a long-running campaign to overthrow the state through the infiltration of Turkish institutions, particularly the military, police, and judiciary.

This article originally appeared in Anadolu Agency on 15 July 2021.